After a subpar QB class – how does 2023 look for Quarterback prospects? Here are some names to know! 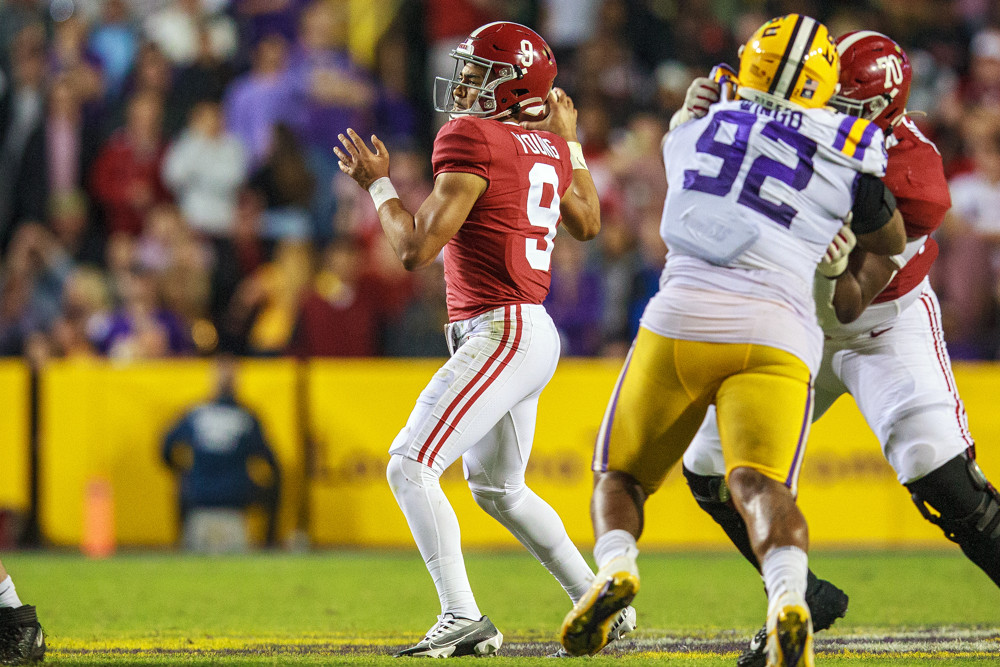 We in the dynasty space have been looking forward to this 2023 crop of quarterbacks for years, it seems. The narrative was that if we could suffer through one year of the likes of Kenny Pickett and Malik Willis, we’d be rewarded with a much more bountiful 2023 class.

Unfortunately, it does not look like this 2023 quarterback class is guaranteed to be all that strong. There are plenty of question marks after the top two guys.

My general sense of the dynasty outlook for this 2023 class of quarterbacks is this: Bryce Young and C.J. Stroud are in a class of their own at the top. They are likely the only two quarterbacks in this class to truly deserve to be first-round picks in the NFL Draft. We will likely see a few more in Round 1 due to the premium real-life NFL teams place on the position.

At this point of the year, I find it helpful to take the pulse of how the college football season is going and how the future dynasty fantasy football assets are stacking up in terms of buzz and value around the community.

As of today, here is how I rank the top ten quarterbacks who are expected to be selected in the 2023 NFL Draft.

There will be plenty of Young vs. Stroud debates in the fantasy space over the next eight months. At this point in time, I lean toward Young at the top spot in my 2023 quarterback rankings. Young seems more polished in terms of pre-snap decision-making, his mechanics appear a tad smoother, and his demeanor under pressure is incredible. The kid looks like a more athletic Drew Brees back there at times, and he’s putting up stellar production without the same caliber of weapons that perhaps previous Alabama quarterbacks have enjoyed in the past.

By the smallest of margins, Stroud comes in second in my Top 10 2023 Quarterbacks list. Although he has been helped by the nation’s most talented receiver group during his career at Ohio State, Stroud is a dynamic passer, especially down the field. He offers a more prototypical size than Young. Stroud’s tendency to trust his receivers to make plays down the field for him could result in more explosive plays. Especially if Stroud lands somewhere with some capable weaponry like he’s used to.

This top-three spot for Levis is less about Levis and more about the lack of other great options, in my opinion. There is a significant tier break for me after Young and Stroud. There is a chance that only those top two deserve to be taken on the first night of the 2023 NFL Draft. Levis has the big arm and the mobility to warrant him being this high on this list. I’m always underwhelmed by his decision-making when I watch Kentucky play. We will hear Josh Allen’s name invoked when experts analyze Levis this year, and that might be a good comp: “early Josh Allen.” But it’s hard to count on the same type of unlikely leap to superstardom Allen made.

Like Kenny Pickett and Zach Wilson in past years, Hooker is playing his way up NFL Draft boards after not garnering much hype before the season began. Currently, Hooker leads the No. 1 overall offense in the nation, and he offers the dual-threat skill set that the NFL loves. Hooker will need to prove he can operate an NFL offense after his career at Tennessee. The Vols run a vertical spread scheme that is not very “pro-style.” Many of the reads and even the actual throws are scripted for Hooker at Tennessee. It remains to be seen if he could be trusted with the keys at the next level. Further capping Hooker’s draft stock is his age; he will be 25 on Draft Day.

Perhaps this is surprisingly high for Hall, but despite BYU’s losing record, Hall has put some excellent football on tape this year. Like Hooker, Hall will also be a 25-year-old rookie, but he brings his dual-threat ability and plenty of skills as a thrower. He has shown good ball placement and touch on those intermediate throws. Hall has also demonstrated plenty of instances of impressive velocity and ability to fit the football into tight areas. Where Hall shines on film for me is with his instincts in the pocket. He is excellent at keeping his eyes downfield while sensing pressure and using his athleticism to avoid the rush, which will surely serve him well at the NFL level.

This spot for Richardson is assuming he declares after this, his redshirt-sophomore season. I suspect he will return to school, but he has the sort of cheat-code athleticism with the ball in his hands to make NFL decision-makers take notice regardless of his flaws as a passer. Jalen Hurts and Lamar Jackson are the two brightest examples of how creative teams can harness these players’ athletic gifts at quarterback. It will be the same story with Richardson: can he improve enough as a passer to have a chance to be a great NFL player?

Daniels is another of these dual-threat quarterbacks with a great deal of upside. He got his “signature win” this past week against Alabama. His stock could continue to rise if he shows more consistency as a passer for Brian Kelly’s Tigers. Daniels’ ball placement and overall accuracy seem better since his days at Arizona State, and he gets the ball out quickly, which the NFL will love to see. He needs to continue to get better pre-snap and improve decision-making post-snap.

Yeah, I know… Bo Nix. He was a punchline at Auburn, but Nix is playing like an entirely new player this season for the Ducks. Through nine games, Nix has thrown 2,495 yards and 22 touchdowns while completing 73.3 percent of his passes (second in the nation). Nix has also been a force rushing the ball, totaling 457 yards and 13 touchdowns on the ground. Nix has the pedigree behind him as a former five-star recruit out of high school, and his physical gifts, combined with his resurgence this season, could have him back on NFL radars.

In addition to piling up huge numbers this season, Penix showed his grit and fortitude last week as he engineered a game-winning drive (starting at Washington’s own three-yard line) late in the fourth quarter against No. 24 Oregon State. Penix and the Huskies are now 7-2 on the season under his leadership. A former Indiana transfer, Penix has revitalized his career this season and is currently leading the nation in passing. He also recently had an eight-game streak with at least 300 passing yards. The left-hander has an extremely quick release and some dual-threat ability as well.

Travis has been excellent in 2023 for Florida State. He’s another athletic quarterback who is flashing as a passer this season, making him an enticing option for NFL teams. Most improved this season versus last is Travis’ decision-making. In nine games, Travis has only thrown four interceptions while scoring 19 total touchdowns. If Travis continues to show promise as a pocket passer to go along with his elusiveness and athleticism as a runner, he will continue to rise up draft boards.