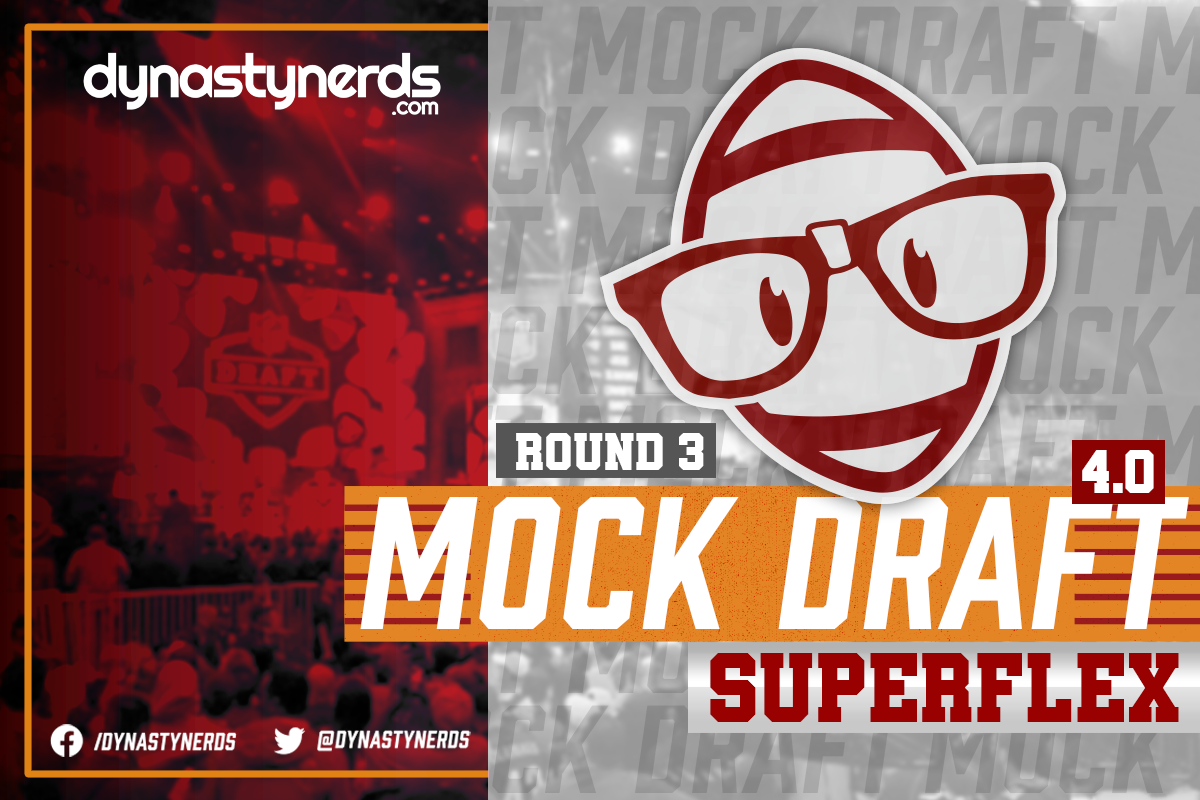 We’re a step ahead of you with our fourth mock of the year- and the first published 3-rounder of the season!

Brevin Jordan would have been the TE1 in most classes. If you like big, fast pass-catchers, take a look at Jordan over a Terry or Seth Williams. He’s got better hands and route running than do either of the size/speed receivers in this range.

He is a sleeper in this draft class. I feel he can be better than Sermon or even Hubbard. Landing spot will play a factor, but in the third round this is good value for a running back that can pound the rock.

I heavily debated taking Kadarius Toney here but I havent done enough research on him to form my own opinion. So I went with somone I have, whom I also really like over the Twitter darling Toney. Dyami was on a powerhouse offense in North Carolina playing with a competent QB in Howell. Back to back 1000 yard seasons are something you love to see. Taking a look at the film Dyami is great off the line of scrimmage, has a solid game speed, and is a threat to be a deep route WR in the league. In the 3rd round that is the type of player I am looking to swing on in order to potentially find a late hit.

The Senior Bowl hype is real, Eskridge may be an older prospect but he shows flashes of how good he can be. He is an explosive athlete who can make an impact on special teams helping his chances of landing a roster spot at the NFL level. From the small amount of film I have watched he gives me subtle Deebo Samuel vibes, definitely worth taking a flyer in the 3rd round.

Before making this pick, I had to go back through our team’s earlier picks to make sure I hadn’t missed Toney being drafted and somehow I had just missed it. Fortunately for me, their loss is my gain. Toney is an extraordinary athlete and a human highlight reel. He has been labeled by some as a gadget player, but with the creative offensive minds in today’s NFL, yesterday’s gadget players become tomorrow’s consistent fantasy producers. He is perfectly suited as a slot receiver at the professional level, showcasing short-range burst and explosiveness that will make teams drool over the potential mismatches of being lined up in the slot again linebacker coverage. I would draft Toney before more than a few of the names appearing earlier on this list. He has improved by leaps and bounds during this breakout season, and if he gets second or even first-round draft capital in this spring’s NFL draft, I promise that there’s not a chance you’ll be getting him at 3.05 in your rookie draft.

For this pick, I’m going to go outside the box a little bit. At this point in the draft, I have already taken an RB and TE. This being a SF draft I want to at least come away with a guy who has a shot at some QB points. There are plenty of questions about Ehlinger’s potential as an NFL QB. What we do know is that in High School he broke all of Drew Brees and Nick Foles’ records. In college, he was a record-setter at UT. The question for us in the dynasty community is whether Sam is more of a Tim Tebow or Dak Prescott. Both players came into the NFL with similar questions and similar styles to Ehlinger. This early in the process, this deep in the mock, before the NFL draft, I’m looking for raw upside. Sam Ehlinger fits that bill and I will select him.

I have been a fan of Nico Collins for a couple years now. He opted out of the 2020 season, and has probably been a bit forgotten because of that. I would be thrilled if I could get him at 3.07 come rookie drafts this summer, but I expect him to be gone before this spot.

Everybody loves to talk about his teammate Javonte Williams, but Carter is a very talented back in his own right. He averaged 8 yards per carry over his UNC career and looked good at the Senior Bowl. He’s a fluid runner who loves to get outside the hashes and turn on the burners. Came in at 5’7″ 202 at the Senior bowl, and although he is a bit short, he fills out his frame well. I will be very interested to see where lands in the NFL Draft as that will heavily impact his stock. I like the value in the 3rd round.

Stevenson has gained some steam among the NFL Draft Twitter world and understandably so. He has the strength to handle the workload between the tackles, as evident by his 33.7% broken tackle rate, which ranked 3rd in the FBS. Yet, Stevenson possesses extremely nimble footwork and does a great job shuffling to find open holes in the line. There are some red flags; he was suspended six games of the 2020 season for a failed drug test. It will also be important to monitor how Stevenson’s game changes with a surprising weight cut. At Oklahoma, he was listed at 247-pounds, but his Senior Bowl weight showed a shocking 20-pound drop to 227-pounds. Whether this weight reduction transforms his game entirely remains to be seen, but I am still comfortable grabbing a prospect of Stevenson’s talent at this point in the draft.

Hawkins is one of the most dynamic ball carriers in this class. I’d like to see him improve as a receiver before I call him a future NFL starter, but I could see him developing into a Tarik Cohen-like player.

Small frame but has speed for days. Only 21 years old and broke out early at 18. Boom bust in the 3rd round.

At 6’3″ and 215 lbs, Surratt has the size to be a number 1 at the next level. After a big Sophomore year, where he racked up over 1000 yards and 11 touchdowns in just 9 games, Surratt was a hot name heading into 2020. Choosing to opt-out this year has forced Surratt’s name to fade somewhat, but the talent and potential are still there and I am stoked to get him at the end of the 3rd round

Check out round three for the 1QB Mock Draft 4.0 being released soon!