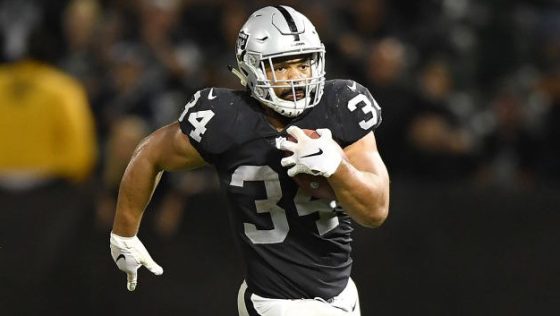 Hey, Nerdherd, I first want to thank you, everyone, all for the positive comments and reviews, I was given regarding my last article which dealt with 3 wide receivers to stash in dynasty. Secondly, I want to thank Dynasty Nerds forgiving me the opportunity to write for such a great fan base in fantasy football. First off, I want to give my disclaimer that this article is intended for deep dynasty rosters with deeper benches. This article is also pertaining to what we know now, things can change with free agency, coaching changes, and the NFL Draft but I believe these running backs could be obtainable for fairly cheap or might be on the waiver wire in some leagues.

The undrafted Texas Longhorn rookie running back was signed by the Oakland Raiders in 2018. Warren was placed on Injured Reserve with an undisclosed knee injury before the start of the season which allowed Oakland to keep Warren on the roster without using a roster spot on him and prevented him from being signed by other teams. During the 2018 preseason, Warren led all rushers with 292 rushing yards with a 5.0 ypc. Marshawn Lynch and Doug Martin are both set to be free agents in 2019 which opens the door for Warren to see significant touches.

Ballage has been very unimpressive this season (outside of a75 yard touchdown run vs Minnesota) from the limited touches he has been given. However, the talent is there for the former Sun Devil who did score 8touchdowns in one game during his college career. Ballage has been buried on the depth chart behind the ageless Frank Gore, the “Miami Miracle” KenyanDrake, and oddly enough Brandon Bolden. The 35-year-old Frank Gore is now on injured reserve and is on a one-year deal with the Dolphins and will eventually be hanging up his cleats as he is Canton-bound. Adam Gase doesn’t seem comfortable in showcasing Kenyan a feature role and Brandon Bolden who is a career backup doesn’t figure longterm in the Dolphins plans. Ballage could be featured in a split backfield withDrake in 2019 depending on how he performs in the last two games of the season.

Scott was selected by the New Orleans Saints in the of the 2018 NFL Draft. He was then placed on their practice squad before being signed by the Philadelphia Eagles 53 man roster. Boston Scott has been compared to Darren Sproles which ironically is also his teammate in Philly. It will be interesting to see what team Scott will be playing for in 2019 and its worth monitoring. If he lands with a promising offense, he could contribute heavily in the passing game and in PPR leagues. The price to acquire Scott should be extremely cheap and the rewards far outweigh the risk.

Good luck with your dynasty teams and good luck in the semifinals of your playoffs. If you got fantasy football questions, hit me up on twitter!

Stash Me If you Can
Penny Stocks: Players To Buy Cheap Before Free Agency