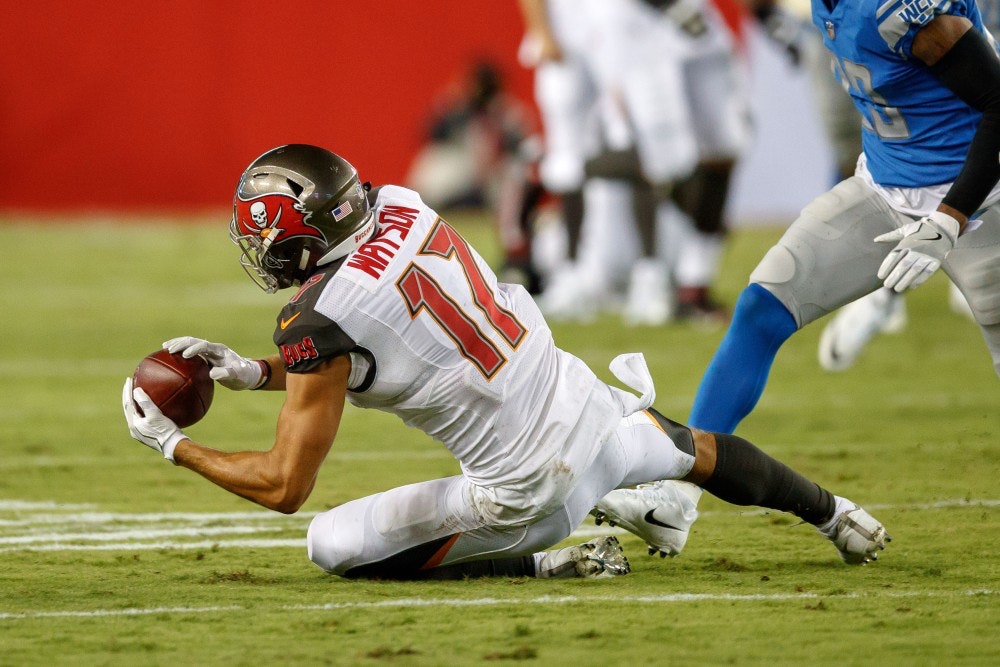 Hey, Nerd herd let me first give a full disclaimer, this article is intended for deeper dynasty rosters with deeper benches. This is also a follow up to the latest podcast where Rich gave you 5 young players to trade for. If you haven’t listened to that podcast, be sure and check it out and also make sure you subscribe to the Dynasty Nerds Podcast. This article had to be edited as Rich said two names that I also believe you should stash (Curtis Samuel and Desean Hamilton). Let’s get to the list!

This call will have a lot to do with the Tampa Bay offseason. Desean Jackson seems to be a likely roster cut as he hasn’t fit into the offense the way Tampa Bay has envisioned. Adam Humphries will be set for free agency which should set up second-year pro, Justin Watson to enter the third receiver role in the high-powered Tampa Bay offense behind Mike Evans and Chris Godwin. The 6’3 receiver set University of Pennsylvania career records for receptions, receiving yards, receiving touchdowns, and all-purpose yards. I believe Watson to have more value in a standard league over a PPR league. It shouldn’t take much to acquire Watson now but beware his price will likely increase if Humphries and Jackson depart.

Hollins came into this season with some preseason hype before being placed on the Injured Reserve before the season opener. The Philadelphia wide receiving core is currently a mess. Golden Tate has not shown to be a fit in the offense. Alshon Jeffrey is a great receiver but has constantly battled injuries throughout his career and seems to be guaranteed to always miss sometime during the season. Nelson Agholor has regressed after a promising 2017 NFL season. Hollins is a candidate to return from IR so his price tag may increase if he is activated and could easily carve out a role in the offense. I feel Hollins has more value in a PPR league over a standard league.
.

In the sixth round of the NFL draft, New England took a 5’9 receiver 184 lb slot receiver. Before his season could start, Berrios was placed on the Injured Reserve. New England has a pedigree for this type of receiver and using their talents to fullest (Wes Welker, Danny Amendola, and Julian Edelman). Berrios could be the heir apparent to take over the role currently occupied by Julian Edelman. With so much uncertainty in the New England offseason, with rumors of Rob Gronkowski’s retirement and the eventual end of TB12 (that day will come one day). Berrios will also have added value with his ability to return kicks and punts. Berrios will have more value in PPR leagues over standard leagues.

Good luck with your dynasty teams and good luck with the playoffs. Also, hit me up on twitter @dynastydadmike for all your fantasy football questions!