4-Round 2019 Mock Draft and Fantasy Implications: Round Four 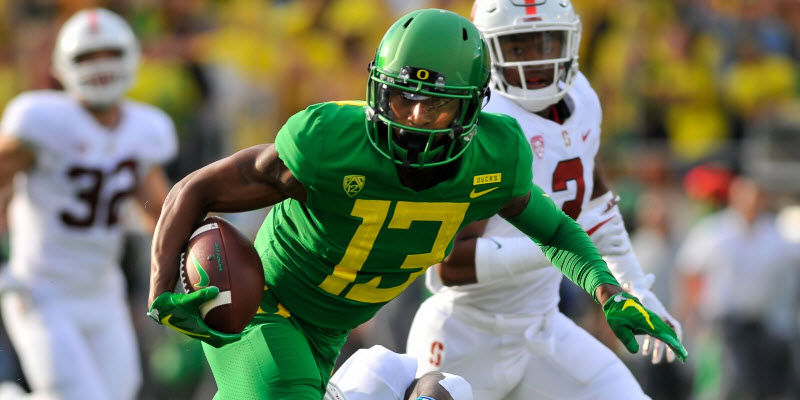 Who doesn’t love mock drafts?  Well, it’s officially the end of #MockDraftSZN and I have my final mock of 2019 ready to roll.  However, this isn’t like any mock draft you’ve seen. This is the fourth and final installment of my four round mock draft focuses solely on the fantasy prospects and what their specific landing spots mean for immediate and future value.  There were no trades factored in. *Disclaimer: When I say standard, I don’t mean 0 PPR, I mean non-superflex.*

An overall raw talent, Mitchell becomes the first skill player off the board to Arizona in the fourth round.  He has average speed, below average route running but has the ability to make plays with the ball in his hands.  He needs a lot more refining to gain the target share needed to be fantasy relevant. Luckily, outside of Christian Kirk and Larry Fitzgerald, the Cardinals receiver room is relatively open for the taking.  Chad Williams has never showed that he can produce consistently, and Kevin White is nothing more than a post-hype, injury prone flyer. I wouldn’t spend much more than a very late rookie pick on Mitchell.

There’s no question that Jacksonville lacks elite talent at wide receiver.  They have a bunch of guys that can be considered good, but not great. Dede Westbrook has shown to be the most talented over the last two season, while Keelan Cole showed flashes in 2017 and the beginning of 2018.  Marqise Lee is coming off a torn ACL but had some decent production in 2017. Slayton, an Auburn product, has 4.39 speed and a well-refined route tree. His production dropped for the Tigers in 2018, just like the rest of the offense so it wasn’t his fault.  This would be an interesting spot for him, but I wouldn’t be pining to have him on my team. Keep an eye on Slayton.

The Lions seem to have a thing for taller receivers (Megatron, Kenny Golladay, Marvin Jones Jr.) so Wesley is my guy here.  The Texas Tech product decided to enter the draft early due to his former head coach, Kliff Kingsbury, being fired (and eventually taking the Cardinals job).  He has elite hands, and uses his lanky frame to play with his back to the rim and haul in contested catches. He has sharp route breaks for someone his size, so I’m thinking he could be a dangerous big-slot for the Lions when they realize Danny Amendola is well past his prime.  Wesley would be a solid stash, but you may have to be patient in waiting for his production to come to fruition in this offense.

A guy that can contribute heavily in the passing game as well, Trayveon is a very interesting fit for Buffalo.  In three seasons with the Aggies, Williams reeled in 66 receptions (19, 20, 27) and ran for 1,760 yards and 18 touchdowns in his final season.  Prior to his final season, he gained additional weight to shoulder the heavier workload he inherited and he did not disappoint. While there may not be an immediate path to relevance for Williams in Buffalo, should anything happen to either of their two near-retired backs, Williams could easily step into an every-down role.  He will likely be a 2nd rounder in Buffalo, due to dynasty players always seeking out running back depth.

Another guy who doesn’t necessarily excel at one particular thing, but is a decent project.  Morgan fights for contested catches, but is an average sized guy (6’, 200) with average speed (4.53).  In the right system, he could be a useful slot option. That’s why I believe Baltimore, with 227 net vacated targets and lacking a true number one receiver, is a great landing spot for Morgan.  Given this opportunity, he could step into as much of a volume role as a receiver can have in Baltimore at this current time. He would be worth a flyer in the 3rd or 4th round or so, but like the previous receivers described, I wouldn’t be champing at the bit to have him.

Coming out of LSU, there isn’t much production to look at with Foster Moreau.  The former Tiger excelled and really put his name on the map in the postseason at the Senior Bowl as well as the NFL Combine in March.  You can read more about him, here (insert recent Foster Moreau article here).  This would be a great spot for him though, with Jimmy Graham likely completing the victory lap of his career in 2019.

The third and final Ole Miss receiver off the board, Lodge’s best trait is his ability to create separation with physicality and a release package that is variable.  DJ Moore is the receiver of the future for Cam Newton and the Panthers, but there is room for an outside-complementary role for Lodge. With Moore, and 2017 pick Curtis Samuel handling a lot of the underneath routes and jet sweeps, Lodge could step in as an outside force.  He would beat out Chris Hogan, in my opinion. There wouldn’t be a lot of volume for Lodge, with Christian McCaffrey, Moore, Samuel and the tight end(s) all fighting for targets already, but he could have some splash games. I wouldn’t be in a rush to have him on my roster, however.

Arguably the RB1 for 2019 going into this past season, Love, unfortunately, tore his ACL in his final college game (a 14-13 win over Pittsburgh in the Sun Bowl).  He also saw his production drop precipitously in his final season with the Cardinal. Given the fact that he won’t be healthy presumably for the start of 2019, I believe Love is not only a perfect fit for Green Bay, but a great value pick for them as well.  As I’ve stated before on Twitter, and in my ‘Fantasy Depth Charts Heat Map’, Green Bay is a great spot for a running back. Their current depth chart is Aaron Jones, Jamaal Williams and Kapri Bibbs. Jones has finished the last two campaigns on the IR, Williams hasn’t been great as a lead back, and the new coaching staff has zero ties to these players.  A third running back to throw in the mix wouldn’t be such a bad thing. If and when the time comes for Love to play significant snaps for the Packers, I believe he would run with the job. He will be a great value for anyone that selects him in the 3rd round of rookie drafts.

Kyle Rudolph’s time with the Vikings is slowly coming to an end, as he just hasn’t consistently produced in a few years.  In steps another Notre Dame product in Alize Mack. I’m not sure Mack has the talent to be a starting tight end, but he would be a great depth piece for the Vikings in his rookie season with the chance of learning and progressing behind Rudolph.  He won’t be worth a pick in rookie drafts.

The University of Kentucky’s all-time leading rusher despite declaring for the draft early, Benny Snell did nothing but produce in his three seasons in Lexington.  He’s more of a grinder than anything, and disappointed many with his 4.66 40 at the combine. However, this is the type of system where Snell could thrive. Jordan Howard, a similar type runner, is no longer in the picture and his only competition would be Mike Davis (Tarik Cohen’s role is safe).  I’m not a Davis believer, so I believe Snell could step right into Chicago and produce for a few seasons. Any running back who lands in Chicago will skyrocket up the rookie rankings, and I would expect the same for Snell who has seen his stock drop heavily in the last couple months.,

Mattison is a dude who not only runs hard and can handle a heavy workload (30 carries or more over his final five collegiate games) but is a threat in the passing game as well.  This is why he would fit well with the Eagles. He also has the hurdle in his repertoire and has a nose for the endzone when near the goal line. If the Eagles were to actually give Mattison a heavy workload, he would be dangerous for fantasy purposes.  But we all know how the Eagles backfield generally plays out, which makes Mattison not that appealing for fantasy purposes.

In case you didn’t know, David Sills V was a top-ranked prep quarterback who then-USC head coach Lane Kiffin offered a scholarship to at the age of 13.  Ultimately, Sills ended up as a receiver at West Virginia his freshman season. After a year hiatus in junior college where he tried to reinvent himself as a quarterback again, Sills returned to the Mountaineers where he put up nearly 1,000 yards and 18 touchdowns with Will Grier at the helm.  His production suffered slightly in his final season, but he still got the job done. He is great at winning jump balls, but struggles creating separation. Since the Patriots missed out on Andy Isabella in this mock, Sills becomes an Edelman-like project for Belichick and company and could be a viable fantasy asset after a couple years of development.  Don’t worry about grabbing him at this time.

Outside of Ezekiel Elliott, the Cowboys backfield is nearly empty.  Where we stand today, Darius Jackson is the current backup. Homer ran a 4.48 at the combine and excels at running outside.  He could be a nice change of pace back for the Cowboys and would instantly become one of the league’s most coveted handcuffs, especially if the 370-touch mark in 2018 comes back to bite Elliott.  If you have Elliott, make sure you get him in the 3rd or 4th round, he becomes a must have.

Another Colorado State receiver product (Michael Gallup in 2018), Williams has elite size, but that’s about it.  There were reports that he disappointed at his pro day, and he was not invited to the combine due to some off-field issues in college.  He has multiple off-field incidents, which isn’t a good look. I wouldn’t touch him, regardless of landing spot, but that’s just how I roll.  He has the physical makeup and runs decent routes for someone his size (6’4”, 210), but I’m not sure he offers much more than that at this time with all the red flags.

I hope you enjoyed this series.  As a reminder, be sure to follow me on Twitter at @JailbreakScreen for up to date dynasty analysis and advice.