5 Prospects to Watch at the Combine 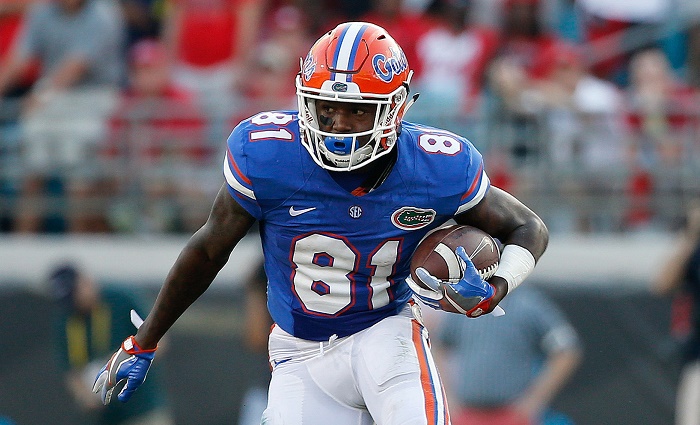 In just a few days, all the data points will be collected to fill the pages at player profiler, mockdraftable, 3sigmaathlete and every other analytics platform. It’s like Christmas for football nerds. After that, the only piece remaining to consider these prospects’ respective values will be their landing spots.

With that said, let’s take a look at some prospects that stand to raise their profiles in dynasty circles with a good showing this weekend.

Place a star next to Calloway’s name on your rookie draft cheat sheets. Many dynasty leaguers may have forgotten about this once highly touted prospect. The Florida receiver did not play in 2017 after being suspended for a “violation of team rules.” Evidently, the University of Florida football program has a very strict policy requiring no marijuana possession, no felony credit card fraud and no sexual assault – allegedly.

Calloway was a name to watch coming into the 2017 season and for good reason. In two seasons at Florida, Calloway demonstrated a consistent ability to create separation while running a diverse route tree and lining up all over the field. He was also a dynamic punt and kick return man, providing further evidence of agility and overall athleticism.

Due to his suspicion, Calloway has been MIA since the fall. If he can impress in tights and answer some tough questions during interviews, he may just end up getting drafted, making him a potential candidate to be this year’s version of Tyreek Hill.

Freeman seems to be the forgotten man in dynasty circles with all the hype focused on other highly touted running back prospects. If nothing else, Freeman has the size, weighing in at 229 pounds, and collegiate production that can be indicative of a potential bell cow.  The former Oregon Duck ho-hummed his way to 6,435 yards from scrimmage in non-sexy, hardhat and lunch-pail type fashion whilst carrying the rock 947 times. While his counting stats are impressive, Freeman doesn’t necessarily flash speed or elite agility in the naked eye film review. But elite speed isn’t necessarily necessary at 229 pounds. If Freeman’s colligate production is matched by comparable athleticism, then this draft class may have yet another bell cow.

Is it just me, or does this receiver class feature some duplicates? From Tre’Quan Smith to Dante Pettis, to Lasley and the aforementioned Calloway, this class features many prospects with identical or similar profiles: thin build, long striders with athleticism who profile as number 2 receivers. In a draft devoid of a clear blue-chip receiver prospect, analytics may be the only way to separate many of these players from each other. From the naked eye, Lasley appears to be one of the more athletic receivers in this class. He shows an ability to eat up a defensive back’s cushion and get yards after the catch. The combine will confirm whether Lasley possesses the burst and long speed to be a team’s top secondary option and primary deep threat.

More importantly, NFL scouts will want to see whether Edmonds has the frame to carry the load at the next level. A weigh-in of less than 200 pounds would be a disappointment. Although there are certainly exceptions, the general rule is that high volume ball carriers weigh well in excess of 200 pounds. LeSean McCoy, Dovonta Freeman, and Dion Lewis are the exceptions rather than the rule.

Edmonds must show that he is healthy enough to compete after his senior season was cut short due to an ankle injury, an ankle injury that was re-aggravated at the East-West Shrine Game and prevented Edmond’s participation.

A hamstring injury at the Senior Bowl prevented Goedert from showing his skills against equal competition. Goedert dominated in the Football Championship Subdivision while often lining up at wide receiver and showing a penchant for Spiderman like catches. Goedert is a big man and I have questions about whether he runs like one. He seems a tad stiff. Demonstrating even adequate speed and acceleration would be indicative of a potential mismatch for linebackers on seem routes as Goedert has the hands to swallow the ball on contested catches.