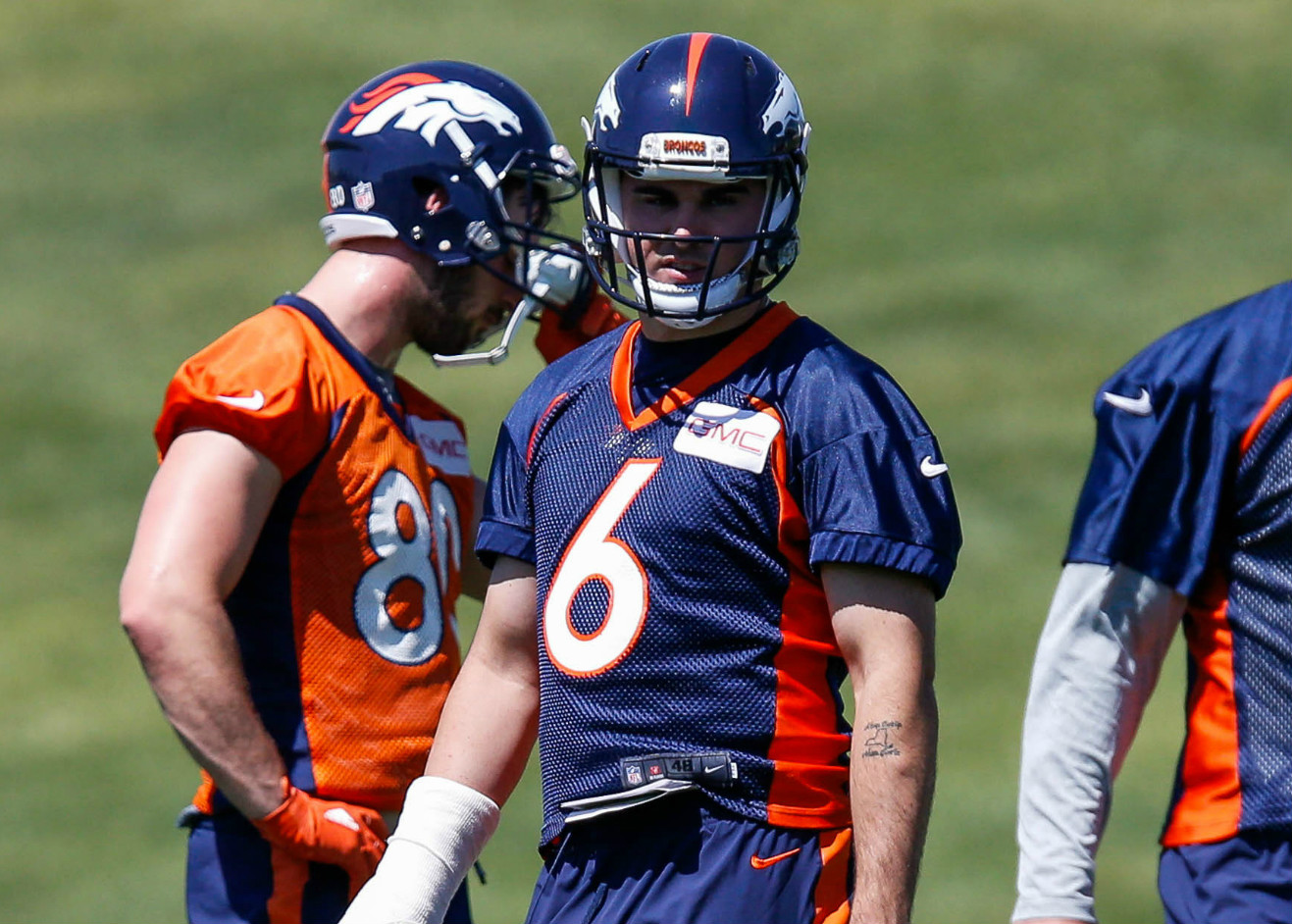 The 2017 fantasy season has come and gone. Dynasty championship dreams were realized or were snuffed out weeks ago. But the great thing about dynasty fantasy football is that there is no offseason. Once one season ends, it’s time to scout and get ready for the following season.

In some leagues, players that will have impacts next season can be found on taxi squads or even the waiver wire. This column takes a stab at identifying a few of those players early so that you can snatch them off the waiver wire now or make a play for them in your offseason trades.  We’re looking for next year’s Kenyan Drake, Alex Collins, Devin Funchess and Chris Thompson.

The Broncos have had quarterback issues since 2015, Peyton Manning’s swan song NFL season. This season, after starting hot, Trevor Siemian was benched, Brock Osweiler was revealed to be Brock Osweiler and Paxton Lynch wasn’t great in his one game before being injured. Siemian is now injured and looked awful on the road versus the Colts before the injury. I fully expect the Broncos to enter the 2018 offseason with an open quarterback competition. Enters Chad Kelly – the 2017 NFL draft’s Mr. Irrelevant.

Kelly’s name shouldn’t be new to dynasty enthusiasts. He is the knuckleheaded nephew of NFL great Jim Kelly. If not for a number off-the-field incidents and injuries in his senior season, Kelly may have been the number 1 overall pick in the 2017 draft. Just ask Bill Polian.

There’s no doubt that Kelly has the talent. In his junior season in 2015, Kelly went 4-0 in games at No. 2 Alabama, at Auburn, home versus LSU and versus Oklahoma State in the Cotton Bowl. In these 4 games, Kelly completed 91 of 151 pass attempts, with 11 touchdowns and just 3 interceptions.

Kelly’s senior season ended with ACL and meniscus surgery, which prevented him from participating in the Senior Bowl. After recovering from the knee injuries, a wrist injury prevented Kelly from working out for teams prior to the draft which led to him slipping to the 2017 draft’s last pick.

Kelly is an aggressive downfield gunslinger who can also beat defenses with his feet. He rushed for 332 yards and 5 touchdowns in his injury-shortened senior season. In 2015, Kelly finished with 509 rushing yards and 10 touchdowns.

The Broncos continue to possess a Superbowl caliber defense that would be made all the more dangerous playing games with the lead. Kelly could make the team a contender once again and revitalize the fantasy values of Demaryius Thomas and Emmanuel Sanders.

Stash him and wait to reap your 2018 rewards.

Switzer wasn’t able to crack the Cowboys’ receiver rotation this season. Any chance at that happening this year was derailed when the UNC product battled hamstring injuries throughout training camp.

Nonetheless, Switzer was inserted as the Cowboys’ primary return man and showed some juice in a week 13 punt return to the cap the Cowboys’ victory over Washington.

At UNC, Switzer was a dangerously precise route runner that could change directions in a blink. It’s no wonder Switzer posted an Agility Score in the 93rd percentile according to playerprofiler.com.

The case for Switzer is bolstered by the examples of diminutive wide receivers that started as return men before taking on larger roles on their respective teams’ offenses. Antonio Brown, Emmanuel Sanders, Julian Eldeman, Golden Tate, T.Y. Hilton and Jarvis Landry are just a few current wide receivers that followed this pattern.

The Cowboys offense is likely to undergo some evolution if Dak Prescott is going to return to his 2016 form. This will require the Cowboys to develop pass catchers other than Dez Bryant, whose play declined for the second consecutive season, Jason Witten, who will turn 36 before the start of the 2018 season, and Cole Beasley, who has done very little with increased playing time.

Switzer has a chance to become a security blanket for Prescott over the middle on mid-range throws, the same role he played while racking up 96 catches in his senior season at UNC as Mitchell Trubisky’s primary option.

Rico Gathers dominated in a small sample size during the 2017 preseason. In two games before going out for the season with a concussion, Gathers posted 7 receptions on 10 targets for 106 yards and 2 touchdowns.

In roughly a game of action, Gathers looked like a 6’6’’, 285-pound former basketball player who was bound for NFL stardom. He is a rare combination of pure size and athleticism that safeties and linebackers will have a tough time dealing with come 2018. And if you think the preseason doesn’t matter then just ask Victor Cruz, Russell Wilson, and the aforementioned Dak Prescott.

At just 24 years old, Gathers has plenty of time to blossom and continue to make the transition from basketball to football. Even better, Gathers is tethered to an offense featuring young playmakers in Prescott and Ezekiel Elliott that should theoretically be a viable fantasy offense for seasons to come.

If you spent the season streaming tight end and sorting through the bottom of the barrel options, then go grab Gathers and wait to see whether the 2017 preseason offered hopes of things to come.

Eli almost didn’t make this list. But at some point, the versatile player marker has flashed too many times this season to be left off.

McGuire saw spot duty this season behind Matt Forte and Bilal Powell. As the third back on the depth chart, McGuire has accounted for just under 500 all-purpose yards.

McGuire has flashed at points this season including totaling 131 yards from scrimmage and a touchdown in week 4 against the vaunted Jacksonville defense. In Week 15 at the Saints, McGuire totaled 72 total yards and a touchdown and blew passed a linebacker on a go route for a 38 yard gain while lined up outside the numbers as a receiver.

In four seasons at Louisiana-Lafayette McGuire posted 130 catches, while going over one thousand yards rushing in every season, except for his freshman year. The versatile back compares favorably to other satellite backs such as Theo Riddick, Danny Woodhead, and Chris Thompson. In the event the Jets do not bring Matt Forte back, look for McGuire to capitalize on a larger role in 2018.

Sorry. I would narrow it down if I could.

Davante Adams just signed a four-year, $58 million contract extension. Rumors are that Adams’ extension could mean the end for either Jordy Nelson or Randall Cobb. According to Over the Cap, Nelson is scheduled for a $12.5 million cap hit in 2018 and Cobb’s hit is $12.7 million. That is a whole lot of cash tied to a 33-year-old Nelson, who vanished after Rodgers’ injury, and Cobb, who topped 1,000 yards receiving just once in his seven-year career and has not topped 700 yards receiving since 2015.

It is certainly possible that Nelson, Cobb or both players will return to the Packers at their current or on reduced salaries. But if they don’t, the door is open for a number of unproven Packers receivers to make the jump to fantasy relevance.  That unproven bunch includes Geronimo Allison, Trevor Davis, Michael Clark, Jeff Janis, and DeAngelo Yancey.

It’s anyone’s guess who could emerge from this group, but the Packers are traditionally dormant in free agency and a rookie receiver is unlikely to have a major impact in 2018. Since 2006, Packers’ receivers drafted in the first three rounds have averaged 34 catches for 439 yards in their rookie seasons.

Keep your eye on the Packers’ receiver situation throughout the offseason and be ready for an unknown receiver to emerge.