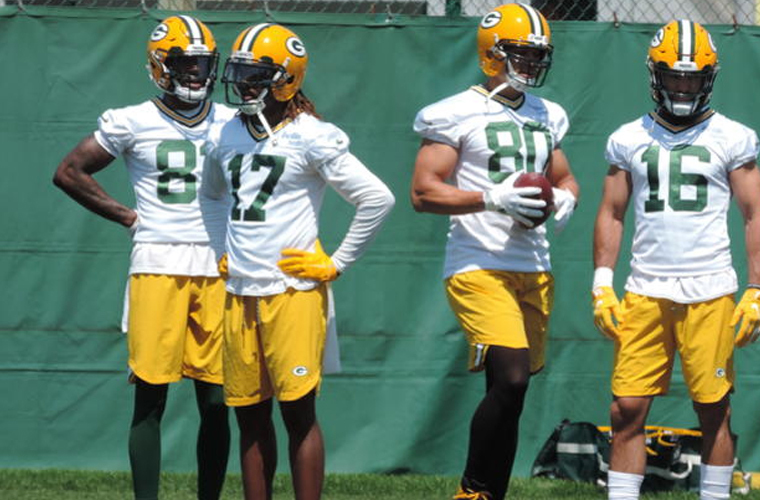 With the opening days of training camp right around the corner, let’s take a look at some of the top position battles to keep an eye on. Below are six training camp battles to watch in the coming weeks.

With Antonio Brown out of the picture, there are an average of 171 (2013-2018) targets to go around to other players. The Steelers brought in Donte Moncrief this offseason on a two-year deal. Last year, they drafted James Washington in the second round. Both players are competing for the other outside WR position while JuJu Smith-Schuster occupies the opposite side. Whoever wins this battle will be a flex option in most league formats.

With Tevin Coleman out of the picture and a new offensive coordinator in Dirk Koetter, there is an open slot to fill behind Devonta Freeman. The battle for the RB2 spot is between Ito Smith, Brian Hill, and rookie Qadree Ollison. Ollison, a rookie fifth-round pick from Pittsburgh, would be a good change-of-pace option alongside Freeman. He’s a big back at nearly 230 lbs. and was handpicked by this new offensive coaching staff. You can read a full breakdown on Ollison here. Brian Hill was also a fifth-round pick of the Falcons in 2017. However, he was picked off their practice squad by Cincinnati. Hill didn’t do much there and wound up back with the Falcons in 2018 while Freeman was recovering. He only saw 20 carries last year, but he forced the Falcons to pay attention to him as he showed some flashes with those carries. Hill is another bigger back and would offer a good change-of-pace to Freeman as well. Ito Smith figures to be the favorite going into training camp. He was selected by the Falcons in the fourth round of the 2018 draft. Although Tevin Coleman handled most of the workload when Freeman went down last season, Ito Smith still managed to see 90 carries. He earned 315 yards with those carries, averaging only 3.5 yards per attempt. He demonstrated the ability to catch the football too, pulling in 27 receptions in 2018. If Freeman does happen to go down in 2019, Smith is the closest comp the Falcons have to his style of play. Whoever can fill this role should be rostered in both formats. We’ve seen Freeman miss time in each of the last two seasons, and the Atlanta Falcons project to be an offensive powerhouse again this year. Even with Freeman healthy, Tevin Coleman still managed to be fantasy relevant from the RB2 position in Atlanta.

The wide receiver core in Green Bay has seen a complete overhaul over the last two seasons. With their new coaching staff headed up by Matt LaFleur, things are bound to get heated for the WR2 and WR3 spots. They have a great first option at receiver in Davante Adams, but after him the targets are completely up for grabs, no pun intended. Two of their three wide receivers taken in the 2018 NFL Draft showed some promise when they saw playing time last season, Equanimeous St. Brown and Marquez Valdes-Scantling (MVS). There are a couple of undrafted guys that have proven worthy for the Packers too, Jake Kumerow and Geronimo Allison. However, both of these guys missed time last season due to injury. Allison is the most experienced among the group and was playing well last year before getting hurt. However, MVS was said to line up alongside Adams during OTAs and looks to have already overtaken the WR2 position. Whoever is trotted out in the WR2 and WR3 positions figures to be a worthy flex consideration every week with Aaron Rodgers at quarterback.

The starting running back position is completely up for grabs in San Francisco. They brought in Tevin Coleman this year with a two-year, $8.5 million contract. Coleman played under head coach Kyle Shanahan in 2016 when he was the Falcons’ offensive coordinator. Coleman was very productive in his offense and looks to be a good fit for the 49ers. Jerick McKinnon signed a four-year, $30 million contract in 2018, but suffered a torn ACL the week before their week one matchup and missed the entire season. McKinnon figures to see touches somehow given his talent and the 49ers contractual commitment. Matt Breida filled in as the starter last year after McKinnon went down and did very well with his touches. He rushed for 814 yards on 153 carries with 27 catches for 261 yards on top of that. All three backs should see opportunities in 2019, but who will get the majority is yet to be seen. The training camp in San Francisco will be very interesting.

The Buccaneers have a new sheriff in town in head coach, Bruce Arians. With that, there will be plenty of changes in scheme and personnel. The running back position figures to be what fantasy owners will be paying the most attention to in Tampa. Peyton Barber finished last season as the lead back, carrying the football 234 times for 871 yards and 5 touchdowns. However, many dynasty owners are fantasizing of a Ronald Jones takeover as the 2018 second-round pick disappointed a lot of owners who took him with their first-round rookie picks. Arians also brought in a couple of veterans who played for him in Arizona, Andre Ellington and Kerwynn Williams. It’ll be interesting to see how this backfield shakes out in the end.

The Bills brought in some new weapons over the offseason to help out their second-year quarterback, Josh Allen. Cole Beasley signed a four-year, $29 million contract and figures to be locked in as the slot receiver for the Bills. The question is, who will be the top option on the outside? Buffalo signed John Brown to a three-year, $27 million contract after a productive season in Baltimore. Last year the Bills were second in the NFL in pass attempts of 20 or more yards downfield with 89. John Brown is a great deep ball threat and figures to be a perfect fit if he’s able to stay healthy. Zay Jones is going into his third year after leading the Bills in receiving last season with 652 yards and 7 touchdowns. Most Buffalo Bills insiders are predicting a big breakout year for Jones. Robert Foster is another young wide receiver to watch on the Bills. He signed with Buffalo last year after going undrafted from Alabama. Foster showed some good chemistry with Allen during the second half of 2018. He finished the year with 541 yards on 20 receptions. He’s another downfield speedster that fits well with Josh Allen. The Bills’ receivers ranked second last in the NFL last season in catches with 149. The only way to go is up.

I’d love to hear who you think will win each battle. Send me a tweet @JaredWackerlyFF and let me know. Feel free to talk about another battle happening in a different camp too, I love hearing other perspectives. Until then, I’ll catch you on the other side of camp as we head into week one of the regular season.