@50shadesofdrunk brings you 8 standout players from the Reese’s Senior Bowl that should be on your radar. 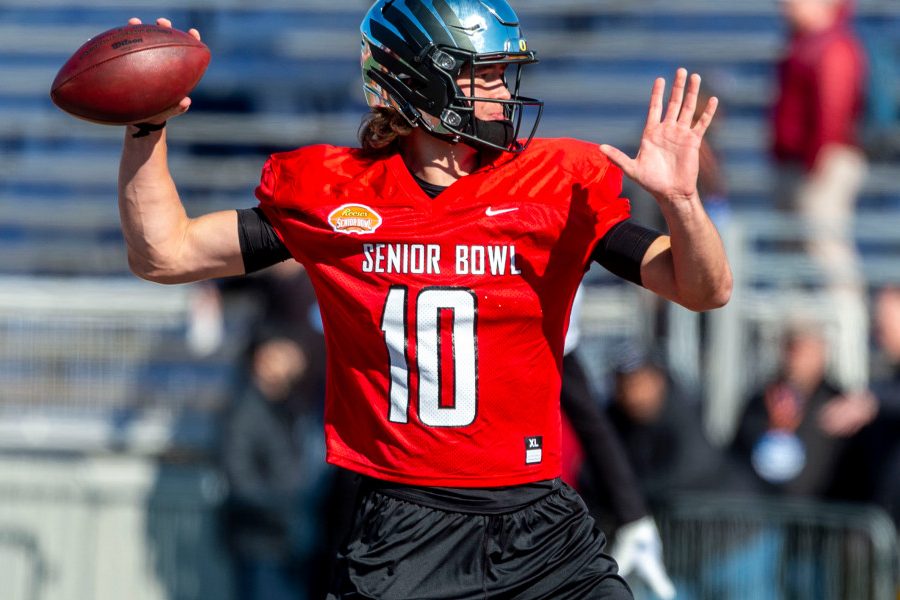 The Senior Bowl is one of the most prestigious bowl games in college football tradition. Players from all over the country are invited to a final game to showcase their talents and abilities. It’s a place scouts, NFL coaches and GM’s flock to every year for an up-close and personal look at the incoming draft class. I was fortunate to make my first Senior Bowl trip as a member of the media thanks to expandtheboxscore.com, the website that hosts my IDP focused podcast (The IDP 411). While I focus most of my content and writing on IDP fantasy football, I took advantage of being up close with so many NFL prospects. I’m going to share my observations from the week, highlighting 8 players I think solidified or boosted their NFL Draft stock the most.

Justin Herbert was the best quarterback during Senior Bowl practices and it wasn’t even close. This will probably be my shortest synopsis but the expanse between how good Herbert was compared to the other quarterbacks was one of the most pronounced among all positions during practice. His accuracy was on full display as he routinely hit his receivers in spots only they could catch it. The rumor mill was in full effect in Mobile with some speculating that the Bengals were so impressed they may trade back, bypassing Joe Burrow, for Herbert. Probably click bait, but Burrows’s absence was a topic of conversation around Mobile all week. Check here for more on Herbert and other Senior Bowl quarterbacks.

Collin Johnson was the first receiver to catch my eye and he did it within the first 5 minutes of practice. He was catching everything thrown to him and made several acrobatic catches in drills. He was bullying the DBs that were trying to cover him making contested-catch after contested-catch.

If THIS Collin Johnson continues to show up, his draft stock is going to to explode. He’s improved his stem work throughout college, but his top of route hasn’t yet developed. Nuanced, technical rep in both aspects: pic.twitter.com/JYn7Soi6Dc

It was more of the same for the rest of the week for Johnson, whose size and catch radius seemed infinite. He was consistently catching everything and beating every DB lined up against him. I’m not an NFL draft scout by any means but he looked like he will make whatever team drafts him, happy to have him. A more complete prospect breakdown can be found here.

The buzz in Mobile was intense surrounding Antonio Gandy-Golden out of Liberty University. Chris Stoops and Ricky Valero of the Devy Delight Podcast put me on notice after the opening press conference that he was one of the players they were most intrigued to see live in practice during the week. I made sure to keep my ear to the ground after hearing that and heard nothing but positive reviews all week from people much more qualified than myself to make them. He definitely solidified his draft stock with solid practices and a few eye-popping catches. Full AGG prospect profile can be found here.

Ohio State wide receiver KJ Hill was another player who popped early. It didn’t hurt that he was the teammate of now standout rookie NFL receiver, Terry McLaurin. Many scouts were on notice and paying special attention to Hill, who out produced McLaurin at Ohio State in 2018. Hill appeared to be a crisp route runner, regularly gaining separation against defensive backs. He might not be a Day 1 pick, but he flashed legitimate NFL receiver traits.

Ohio State WR KJ Hill – jab outside, sell the route with his eyes and able to track the ball over his shoulder. So, so smooth. pic.twitter.com/Hk61t2cFnK

Two guys really stuck out in the running back group early. Eno Benjamin from Arizona State and Ke’Shaun Vaugh of Vanderbilt. Even though the drills weren’t full contact you could tell Benjamin was running decisively. The coaches occasionally had to tell some running backs to finish the run even after the whistle, but never Benjamin. He showed a high level of comfort in the passing game and was routinely beating linebackers and defensive backs in drills, getting wide open.

Something that doesn’t show up on film that I heard several scouts mention was his undeniable leadership and communication abilities. Unfortunately, Benjamin didn’t showcase much of what he showcased in practice in the actual Senior Bowl game. Rushing for a mere 20 yards on 7 carries he was never able to break off anything flashy. For more in-depth player profile make sure to check this out.

Joshua Kelley out of UCLA was probably the biggest offensive surprise for me at the Senior Bowl. Coming in at 5’10 and 214lbs, Kelley was one of the bigger running backs at the Senior Bowl. During drills, Kelley looked decisive and agile. It seemed like every time he touched the ball in 7-on-7 or 11-on-11 drills he managed to explode through the defensive line untouched. His decisiveness and quick lateral motion are on display here as well as some nice footwork.

Something the analytics folks will really enjoy about Kelley was his 25% market share of UCLA’s total offensive yards and 71 receptions in 2019, per www.expandtheboxscore.com. He capped off the Senior Bowl by rushing for 105 yards on 15 carries and was voted Senior Bowl North Team RB practice player of the week by his peers. Keep your eyes on this guy and expect the buzz to build as the draft season enters full swing.

Ke’Shawn Vaugh looked very comfortable as a pass-catcher. Showcasing his ability to track and make adjustments with relative ease regularly. Vaugh also showed tremendous speed and burst all week during individual drills or during 7-on-7 and 11-on-11. His full draft profile can be found here.

This one is for the IDP fantasy football crowd! Bradlee Anae had an incredible week of practice at the Senior Bowl. During drills, his technical prowess was on full display on almost every single rep. He displayed a good arsenal of pass rush moves against some very good competition and when the lights were the brightest, he came up with 3 sacks during the Senior Bowl game. Two on back to back plays. His draft stock definitely improved after his Senior Bowl showing, no doubt about it. For more on Anae and other IDP fantasy football prospects checkout my IDP report article here.

Bradlee Anae had a very good day two. He showed off his pass rush arsenal.

The Senior Bowl isn’t the end all be all by any means when it comes to scouting NFL prospects. However, the mantra ‘The draft starts in Mobile” is accurate. By the time Senior Bowl week rolls around in January, for all but two NFL franchises, draft season in full effect. Your fantasy football draft season is no different and the sooner you become aware of information the longer and more thoroughly you can scrutinize it. Finding the truths and uncovering deceptions before your competition will always be a leg up.