If you are in an IDP dynasty and you are looking for a safety, look no more. Let’s check out why you should pick Paris Ford in your rookie draft. 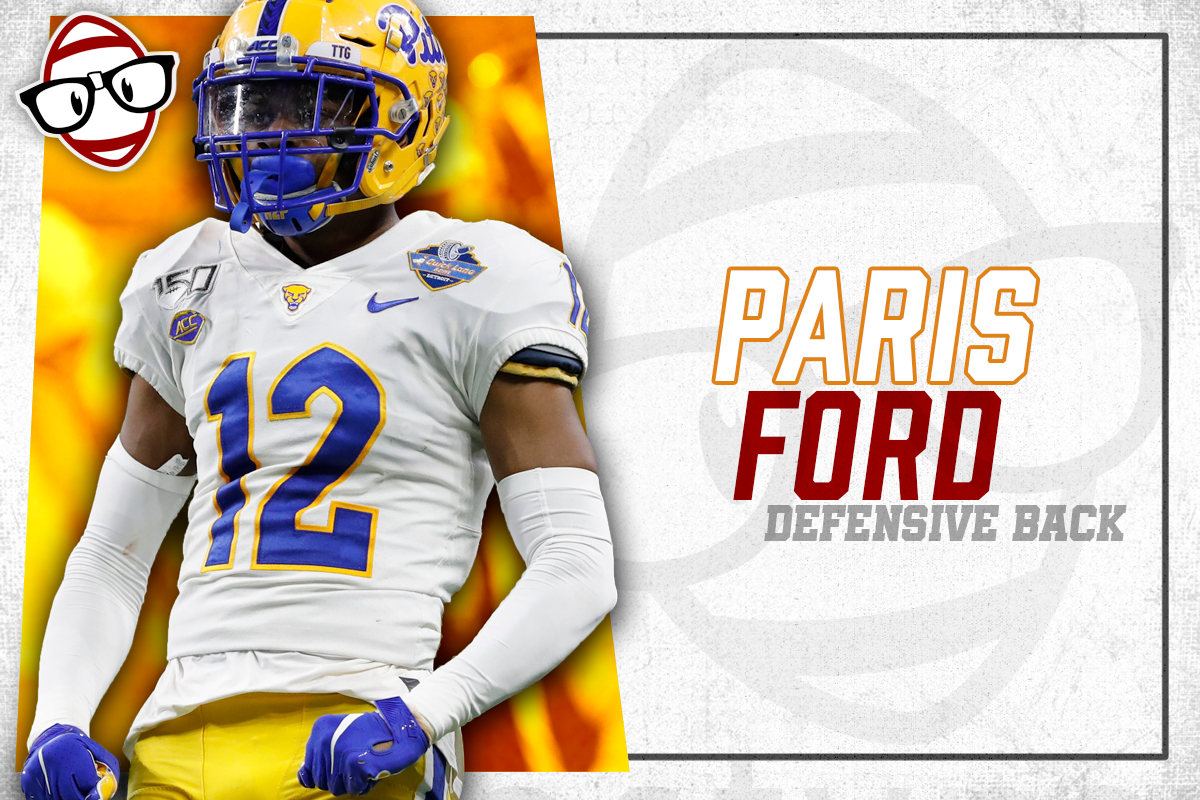 Paris Ford is a hometown hero in the state of Pennsylvania. Everyone knew who this kid was in the state due to his outstanding athletic abilities. He helped his high school win a state title while playing running back, wide receiver, and all over the defense. He was a four-star recruit and had offers from tons of big schools, including Alabama, Oklahoma, Notre Dame, and Ohio State, but he decided to stay loyal to his hometown and go to Pitt.

Paris Ford has a great nose for the ball and the ability to make big plays. Though undersized for a safety coming into the league, you would not be able to tell by the way he plays. He is not afraid to get in there on every play and lay some wood on a guy. Ford is exceptional at stopping the run and playing in the box but has the awareness to play in all coverage schemes as well. He is a fantastic athlete and plays angry while bringing a certain type of swagger to his game. His teammates seem to love playing with him, and it’s evident that everyone loves his passion and hype he brings to the football field.

He started his college career getting redshirted and never played a down his first year at Pitt. The following season in 2018, he came in thinking he was going to get the opportunity to prove his worth. He unfortunately only played four games and got a whopping five tackles, all coming on special teams. This may have put a fire under him as he went into the 2019 season with a chip on his shoulder. He showed everyone why he was such a dangerous player by flying around the field and making big plays all season. He finished the season with 97 total tackles, 3 forced fumbles, 3 interceptions, 11 passes defended, and a defensive touchdown in 12 games.

Ford initially wanted to see if he could put up a solid performance in 2020 with his team when he decided to stay in college and play another season with Pitt. A game where he really showcased his skills was against Miami. He was all over the place making plays and finished that game with 6 tackles, a couple of quarterback pressures, and a great read on a ball to get a pick he nearly took to the house.

Watch out for big time playmaker Paris Ford in your IDP leagues this rookie draft!https://t.co/DfWv8Rvd4j via @imgflip

He finished the 2020 season with 41 total tackles, 3 passes defended, and 3 interceptions in only 7 games. Ford opted out of the 2020 season with only four games remaining due to the combined reasons of his team dropping a 4-game losing streak and the scare of Covid-19.

This guy loves to play with such intensity that, at times, he runs through the ball carrier. He resembles the play of a smaller version of Jamal Adams. He is excellent at filling the gaps and stopping the run and just as explosive rushing the quarterback. More than anything, though, they both play with the intent to knock someone’s head off their shoulders, and they both play with a huge amount of passion and fire. If Paris Ford can even get remotely close to Jamal’s level of play, he is going to put up good numbers in an IPD league.

Some consider Ford to have the highest motor in college football. That is why he is such an exciting and explosive player. Not only can he play the box safety role, but Ford also has the intangibles and football IQ to play good zone coverage on either side of the field. He is talented at covering a lot of ground. His field vision is on point, always knowing where the football is. This is precisely what all NFL teams are looking for when scouting defensive players. It is also everything a dynasty owner should need in a DB. Being a great locker room hype guy and leader, he will fit in anywhere he lands in the NFL.

Sitting at 6 feet and 197 pounds, he looks even smaller on the field. He plays big, but he sometimes struggles to wrap-up the ball carrier. This could be a problem seeing as he will be going up against much bigger and more physical opponents in the big leagues. Sometimes he plays too fast and misses his opportunity to make a play.

With the lack of wrap-up tackles comes a high probability in the NFL for missed tackles. Another big thing he needs to improve on is finishing a play. Unfortunately, when the ball is headed to the opposite side of the field, he seems to stop playing. He needs to play with the same intensity every play. The good news about these weaknesses is, they are all coachable.

With that said, his pro-day numbers were abysmal. They were so bad it is almost as if he sat on the couch and played madden for months. After gaining nearly 10 pounds in just a few months of eating junk food and sitting on the sofa, Ford thought it would be a good idea to do all the pro-day drills entirely out of shape. His terrible 29″ vertical was tied for the worst vertical by a defensive back in combine history. His 9′ 2″ broad jump is on par with Earl Thomas (9’4″) and Antonio Brown (8’9″), which are not good numbers. He had a worse three-cone than Calias Campbell (7.45s) at a whopping 7.65s. Last, but most certainly not least, his 40 time. He looks so fast and explosive on-field yet ran a 4.9 40, equivalent to an offensive lineman.

This will affect his draft capital. Some would also say he has an attitude problem with being ejected twice. Honestly, that can be chalked up to his passion for the game. He did get the police called on him his first year at Pitt. It was all because of a Madden game getting out of hand with a friend that turned into a shouting match. Other than this instance, he has stayed out of trouble.

This kind of guy will be a great locker room guy and playmaker. Unfortunately for him, he will probably be drafted sometime on day three. Before his horrific pro-day outing, he was considered to be one the best safeties coming into the NFL draft. The NFL team that ends up getting him will get a steal. He most likely will show those numbers were a fluke. Not only will an NFL team get a steal, but whatever dynasty owner grabs him could get the sleeper of the draft. Look to draft him in the IDP rookie draft around the back end toward the last rounds.

Dynasty owners may stay away from him, but his tape still suggests that he can ball. For now, you should look to stash Ford on the Taxi until you know he is going to start. If he gets the opportunity to show his worth and is the starter on a team in 2021, he will be an impactful player for IDP dynasty owners. He will get you sacks, TFL, picks, and of course, plenty of hard-hitting electrifying tackles. If you happen to be skeptical about drafting Paris Ford because of the pro-day numbers, watch some film on the guy. He is not a 4.9-40 type of player, as he can keep up with anyone on the field. Even if his 40 time isn’t the fastest, he makes up for it with great intangibles and football IQ.

The Battle of the Backs – Kenny Gainwell vs. Kylin Hill
In the Zone: Rookie Running Back Fits