The 2021 NFL draft was filled with talented slot wide receivers, and many went undrafted. One of those that went undrafted was Cade Johnson. The Seahawks signed him shortly following the draft. @WooLee_FFB analyzes why Johnson could bring value to you in dynasty and is a must-stash player. 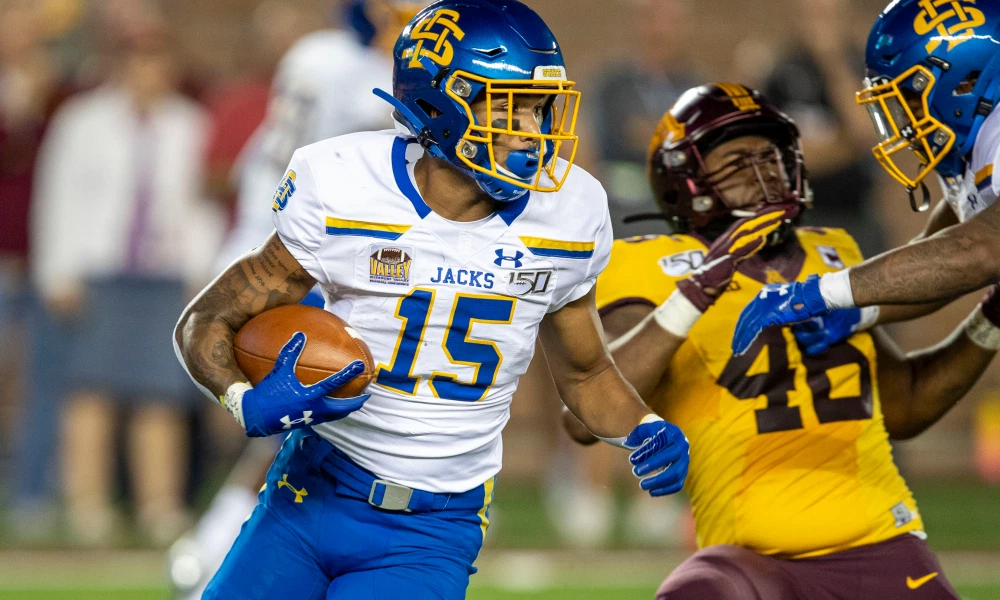 The 2021 NFL Draft featured talented slot wide receivers, many of which ended the draft without hearing their name called. One of those, WR Cade Johnson, didn’t play for the most competitive division. However, he did produce at a high level while playing at South Dakota State.

The former Jackrabbit did go undrafted, but it wasn’t long until the Seattle Seahawks scooped him up soon after the draft. I’ll go more in-depth on why he’s a player you should be stashing on all of your dynasty rosters.

Johnson joined South Dakota State in 2016 and redshirted during his freshman season. That would turn out to be a good thing for him as he would go on to make a splash for the Jackrabbits in his career.

Johnson made an immediate impact on the Jackrabbits in 2017. He posted 318 yards on 23 receptions, along with 3 TDs. Those receiving numbers aren’t impressive, but it’s what he did in the return game that surprised folks.

As a returner, he accumulated 839 return yards along with 2 TDs. He ended 2017 with All-American honors, and he wouldn’t disappoint fans in the following season.

This time, Johnson made his splash as a genuine wide receiver and not as a returner. He accumulated 1,332 receiving yards on 67 receptions along with 17 TDs. Johnson took over the WR1 role for the Jackrabbits and would also do the same in 2019, his junior year.

Though he didn’t put up the same numbers as he did in 2018, Johnson commanded a vital role with 72 receptions with 1,222 yards; he also posted 8 TDs. Once again, Johnson was named to an All-American Team in 2019. However, this time, it was the first team.

Johnson wouldn’t capitalize on his immensely successful sophomore and junior campaigns in his final year of college due to the COVID-19 pandemic. South Dakota State had their season postponed to the spring, and Johnson decided to prepare for the 2021 NFL Draft instead of suiting up for them.

A Deeper Look Into Johnson’s Statistics

Looking at Johnson’s statistics, you see that he was incredibly productive. He always had more than 1,000 total yards throughout his tenure and posted back-to-back 1,000 receiving yard seasons to cap off his collegiate career.

He was an alpha receiver for the Jack Rabbits, and the passing offense ran through him. Arguably, Johnson’s most impressive work was in 2019. There were multiple quarterbacks in the rotation for the Jackrabbits.

However, even with the inconsistency at the QB position, he still produced over 1,000 receiving yards. That highlights how good Johnson became. His success didn’t come from excellent quarterback play. Instead, it’s the other way around.

He made his QBs better by being on the field. Johnson was the alpha, number one wide receiver for the Jack Rabbits. In that process, he proved he could have success at the next level.

Johnson’s a smaller receiver that likes to play big. He made some hard catches in traffic and also routinely caught passes in double coverage. Johnson isn’t afraid of taking hits to secure difficult catches.

Another skill Johnson displayed was his ball tracking ability. He always seemed to have a feel for where the ball was.

It didn’t matter whether it was a deep ball or short slant; Johnson would pinpoint the ball. He also had good hands as he often hung onto the ball after difficult attempts at catching it.

Johnson was also superb in open space for the Jackrabbits in 2019. His run after catch abilities was on full display during screens, quick slants, jet sweeps, etc. Whenever South Dakota State handed Johnson the ball, he made a play.

Not only did he show off his elusiveness and his ability to shrug off tackles, but he showed his willingness to take on contact to gain extra yards. That level of toughness and elusiveness should translate well as a slot receiver in the NFL.

As I said earlier, Johnson went undrafted in the 2021 NFL draft. Shortly after the draft ended, the Seahawks signed him as an undrafted free agent.

It’s not the ideal situation for Johnson because going undrafted makes him expendable. He must perform well in his rookie year, or else he’s in danger of getting replaced by someone else.

For fantasy, this isn’t an ideal situation for Johnson. Wide receiver’s Tyler Lockett and DK Metcalf line up as the first and second options. In addition, the Seahawks added WR D’Wayne Eskridge from Western Michigan in the 2nd round of the NFL Draft.

All signs point to Johnson having an ineffective first year. However, he still should be stashed on your taxi squads. He’s talented enough to be an effective slot receiver. He only needs the opportunity.

Overall, Johnson is a talented slot wide receiver who landed on a team with no draft capital invested in him and a bad situation. At this point, he has little to no fantasy appeal other than being a stash.

He could be a good option in the future when more opportunities are available. That most likely won’t come from the capital invested into him. Johnson has to prove his value all on his lonesome.

Dynasty managers should look to stash him after rookie drafts expecting the best possible scenario. Johnson most likely won’t bring any value but can garner fantasy value in the future.