Age Ain’t Nothing but a Number

Due to the current situation surrounding us with the COVID-19, rookies are missing out on some valuable offseason training. That could lead to some veterans getting off to a hot start in 2020. Take a look as I highlight five guys who will get off to a hot start with their rookie counterpart behind the eight ball. 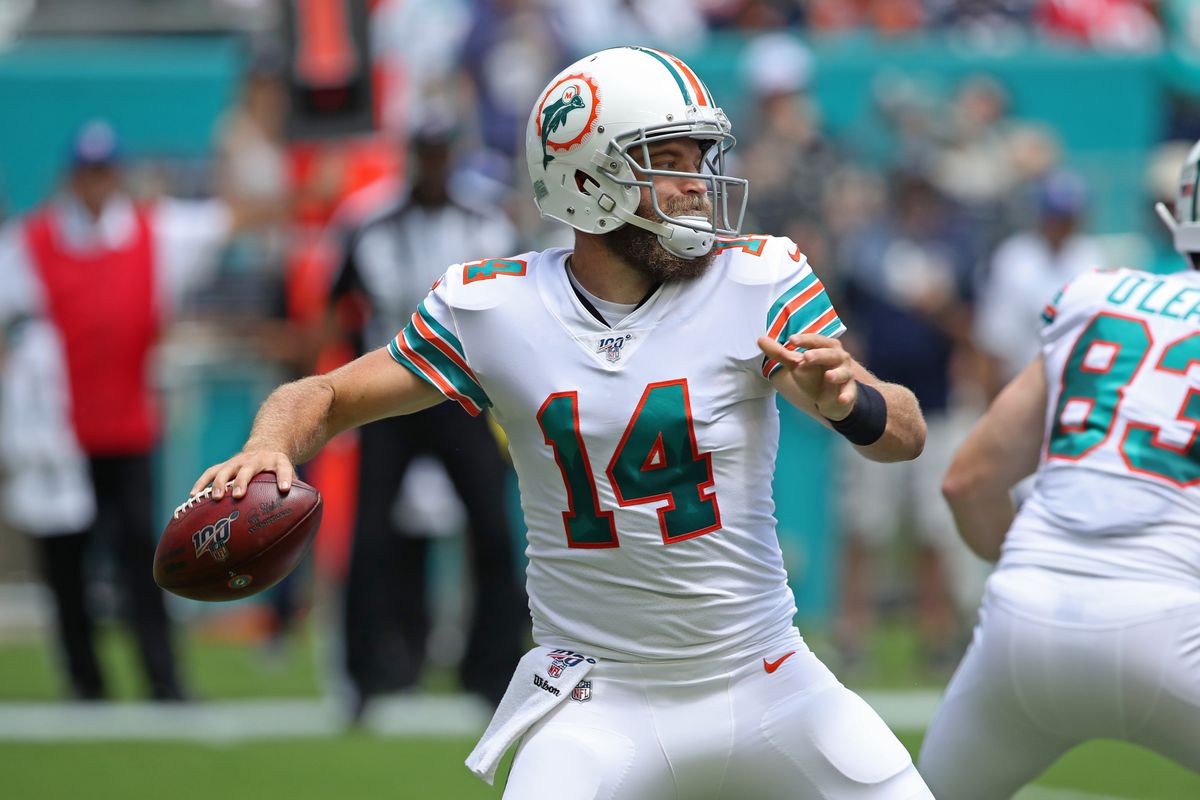 This year more than any in recent memory will be odd due to coronavirus. Players who contract the virus or have associated with someone who has the virus will miss some time. It will affect your dynasty fantasy football teams, and the first of those effects may have already taken place.

Due to the outbreak of coronavirus, rookies all across the NFL have missed some valuable on-field reps. They had no rookie camps, minicamps, or OTAs. That will inevitably put some rookies behind the eight ball this season. What that looks like, or how long it takes them to gain some ground on the veterans, is unknown. However, we do know that some rookies will recover.

For this article, I compiled a list of five guys who are the biggest beneficiaries of their rookie counterparts’ lost time. If you have players go down in training camp to injury or by contracting coronavirus, these are some guys you could rent to keep you afloat early in the season. Some of these guys are still young and valuable in dynasty leagues.

I want to start by saying that I am by no means a Henderson fan. He is just a guy, but 90% of your dynasty teams could use another RB. Thus, Henderson is someone I wanted to highlight.

The Rams drafted rookie RB Cam Akers out of Florida State in the second round of the 2020 NFL Draft. Akers was one of the more unpolished products in this year’s draft, highlighted by the film nerds earlier this year.

Gurley and his 254 touches are gone.  Henderson could see a lot of volume as Akers is slowly mixed in. It’s also feasible, but unlikely, that he holds on to the job if he plays well. They did spend up to draft him in the third round of the 2019 NFL Draft.

I freely grant you that he didn’t play much last year. However, he was still in the system, learning the playbook and taking practice reps. He will be the main guy for about three to four weeks. After that, I believe it will become more of a 50-50 split before Akers eventually takes over.

Acquiring Henderson may be a little tricky as he is only entering his second year in the league. Remember, they did select an RB in the second round of this year’s draft; don’t overpay for him.

Fair value for Henderson is a little tricky to figure out. A player of similar value that you could move for Henderson is Atlanta Falcons TE Hayden Hurst. If you want to trade a draft pick instead, an early to mid-level third-round pick is also similar in value.

Now, this one is for my superflex dynasty owners out there. Fitzpatrick is easy to acquire in virtually every format as almost everyone expects the Dolphins rookie QB Tua Tagovailoa to compete for the starting spot.

I, however, am not one of those people. Due to the lack of a real offseason for Tua, I expect Fitzpatrick to be under center in week one. I also believe the Dolphins will leave him out there all season.

It’s been a long-running theory that Tua would ride the bench this year to heal from his hip injury from last season, especially since they have one of the weakest offensive lines in the NFL.  Expect Fitzpatrick to play a majority of the year as the Dolphins bring Tua along slowly. As the starter this season, he will be a viable QB2 or QB3 in superflex leagues.

I’ve backed this take up with my actions as I recently nabbed Fitzpatrick late in my Ballers Campus-to-Canton Devy league. Fitzpatrick will be my second QB as I await the revival of Clemson QB Trevor Lawrence next season.

To acquire Fitzpatrick in a non-superflex league, the level of players you’d have to deal are guys like RB Gus Edwards of the Baltimore Ravens or Indianapolis Colts RB Jordan Wilkins. Both are the third or fourth back on their teams and aren’t in line to get any significant work, so you aren’t losing much by dealing them away; still, only do that if your team only has one injury-prone QB.

You would have to trade away a player like Atlanta Falcons WR Russell Gage or Philadelphia Eagles WR DeSean Jackson in a superflex league. I know it is only a one-year rental, possibly less than that, but your second or third QB on a superflex team is essential. Fitzpatrick will put up QB2 numbers and provide stability if your QB room gets hit with COVID-19.

I don’t know if you’d consider Arcega-Whiteside a veteran, but a path has been cleared for him to play. Fellow WR Alston Jeffery has landed on the Physically Unable to Perform list, guaranteeing he will miss at least the first six weeks. WR Marquise Goodwin opted out of the 2020 season due to COVID-19. The Eagles did select Jalen Reagor in round one, but he won’t have a full offseason of training.

Arcega-Whiteside has a leg up this year as he has already learned the system and has some chemistry with the starting QB. The only other WR of note is Jackson, as mentioned earlier, but I don’t see Jackson as a threat to what should be Arcega-Whiteside’s role. That leaves Arcega-Whiteside in position to thrive on the outside as Reagor tries to make up for the lost time.

Arcega-Whiteside is someone I recommend buying. I was incredibly high on him when the Eagles drafted him last year, and a down rookie season has not changed that. The Eagles have a thin WR corps, so it isn’t guaranteed that he will lose his job when Reagor eventually gets a starting gig.

He is incredibly cheap compared to how he was valued last season. All it should take to acquire him is a player in the same tier as New Orleans Saints WR Emmanuel Sanders or Carolina Panthers WR Robby Anderson. Draft pick compensation needed for him would likely be a 2020 third-round pick. If you have to give up a little more to acquire him, go for it; you can’t go wrong with this young talent.

Hilton is a little bit different than the other guys on this list. He is older, and maybe on the decline the past few years as he’s dealt with various injuries. In the past two seasons, he’s missed eight games, including six last year. However, he did eclipse 1,200 receiving yards in 2018 before failing to reach 1,000 last season.

It’s been so long, but if you can remember, it was just last year that QB Andrew Luck retired in the preseason. That forced backup QB Jacoby Brissett into the starting role, and it affected Hilton.

This year, though, the Colts signed the veteran QB Phillip Rivers from the Los Angeles Chargers. Just last season, Rivers supported two WRs to top 1,000 yards receiving. He still has some gas left in the tank. I expect Hilton to thrive at the start of the season and beyond.

The start of the season will primarily feature Hilton as the Colts made no notable moves to upgrade the receiving core outside of drafting Michael Pittman. Hilton already would have been the main guy for the Colts, but now it is almost assured he will keep that role all season. The missed time will hurt Pittman, just like these other rookies, though I do expect him to recover quicker than most.

You are not acquiring Hilton for the latter part of the season, you’re buying him cheap before he blasts off in the first few games. Pencil Hilton in as a WR1 for the first four or five weeks just based on the volume he’ll surely see. As Pittman gets more comfortable, he’ll start taking targets away from Hilton, which will limit the older receiver’s upside.

To acquire Hilton, you will have to trade a player like New York Giants WR Darius Slayton. That is a win-win situation if you own a contending team. You get a solid veteran with high upside to help you win early but that won’t disappear down the stretch. In contrast, the other side gets a good up-and-coming talent at the WR position.

This is less of a buy and more a vote of confidence. The Cowboys have one the highest amounts of vacated targets heading into 2020 with 166. That’s more than enough for QB Dak Prescott to feed rookie first-round WR CeeDee Lamb.

I’m an avid Lamb truther; I own him in every league. However, I also love Gallup. Gallup and Lamb will be the feature WR duo of the Cowboys and I believe that WR Amari Cooper will be the odd-man-out.

Acquire Gallup now, while you still can at a relatively low price; he will start hot as Lamb gets settled in. A majority of the 166 vacated targets will be split between Gallup, Lamb, and TE Blake Jarwin. With those extra targets, Gallup will excel in fantasy as a top 24 WR. Sure, he will cool off when Lamb gets up to speed. Until then, it will be the Gallup show in the big D.

Gallup is going to be the hardest one to acquire on this list. He has shown the most fantasy potential outside of Hilton but is in the same age range as Henderson and Arcega-Whiteside. To buy Gallup, you will have to give up someone like New York Jets RB Le’ Veon Bell or Arizona Cardinals WR Christian Kirk. Honestly, if I could get Gallup by only giving away Bell or Kirk, I would do it in a heartbeat. Get Gallup! You’ll thank me later.

Give Ethan a follow on Twitter and his articles can be found at here. Have you tried the new DynastyGM tool? For just $2.99/month you can see how your team stacks against your leaguemates, see who would be a good trade partner, and much more.