Albert Okwuegbunam was previously a top tier Rookie TE prospect. @DynastyJon explains why opinion may have soured on the Missouri big man! 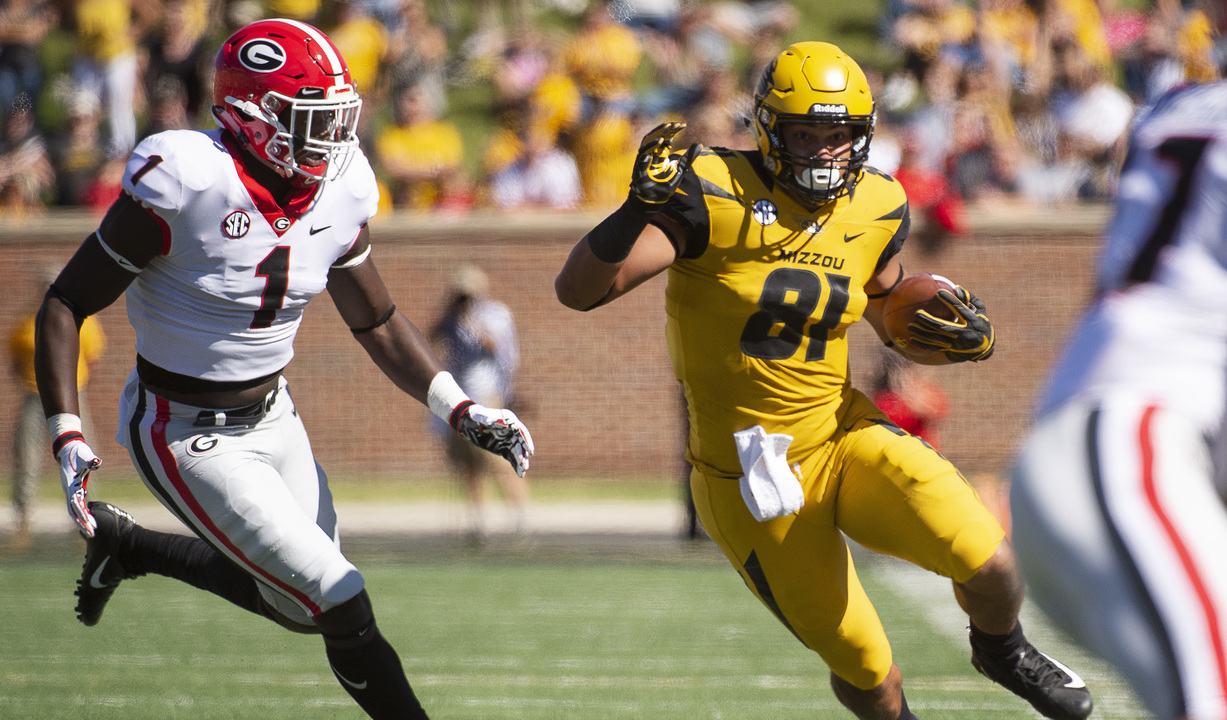 Albert O enters the draft with not only a difficult name but also a confusing prospect profile. Albert O was considered one of the most promising TE prospects in the country following the 2018 season. He was thought to be on a similar trajectory as the likes of Noah Fant and Irv Smith. However, in recent times, opinion has soured on the 6’5” 255-pound Missouri Tiger.

The fact that Albert’s hype has dissipated in recent times can likely be correlated to his dip in statistical production. His Freshman season was his most productive and has declined each year since. Okwuegbunam’s college production each year can be seen below:

The 21-year old Junior had the graces of Drew Lock as his QB in 2017 and 2018. The entire offense took a large step back in 2019 with Clemson transfer, Kelly Bryant, under center. That being said, there are plenty of traits that could translate positively at the next level, as well as some concerning traits that may make him a risky prospect.

Firstly, he is physically ready for the NFL and puts that size to good use. He’s a monster at his current stature and, although it’s cliché, he excels at boxing out defenders and winning contested catches. His large frame and strong hands give him the capability to trap most balls thrown in his direction, through traffic. If he’s matched up with a defensive back, they’re simply not going to compete in a physical altercation with him. This makes him an excellent matchup weapon.

A couple of examples of his contested catch potential and to vacuum in a catch over the top of a defender can be seen below:

I do find his routes to be a little hit or miss. He runs the Seam route a ton. It’s honestly quite like deja vu watching his tape as it’s seam route after seam route. Quite often getting hit over the middle on play-action passes. Outside of that, he tends to run underneath drag routes or catches passes on screens. So, his route tree isn’t too diverse, but in those limited routes, he has a knack of finding open spaces in the zone and turning those catches into long gains.

An example of his YAC ability can be seen below:

It’s not easy to chop this tree of a human down. The converse of that is that in comparison to TEs like Hunter Bryant, Harrison Bryant, or Brycen Hopkins, his routes are rigid and rather than making sharp cuts, he tends to round out.

I guess that translates into a weakness of sorts for Albert O. For such a big man, it appears he doesn’t quite have the lateral agility of flexibility to zig or zag. Although he’s able to do enough at the College level, I don’t think the separation will be there at the NFL. Will this route get him free at the next level?

Okwuegbunam’s other large area to improve comes in his blocking. When he lines up inline, he seems to lack the energy and drive that you would expect. He doesn’t hold his blocks for too long and it seems like he’s trying to save the energy in the tank for his next passing play. Usually, with larger TE prospects, the blocking is one of their strong suits so that is slightly concerning.

Overall, Albert is certainly behind the top TEs in this class. He’s not a Tier 1 TE prospect in 2020. He’s largely a raw prospect who has the size to become relevant down the road with strong coaching. I think it will take 3 or 4 years to see him receive regular snaps in the NFL. I ultimately wonder how much he can stay on the field when his routes aren’t crisp, and his blocking is questionable. Currently, I anticipate him to be a 3rd or 4th round rookie pick. For me, that could only change if a team drafts him much higher than anticipated.