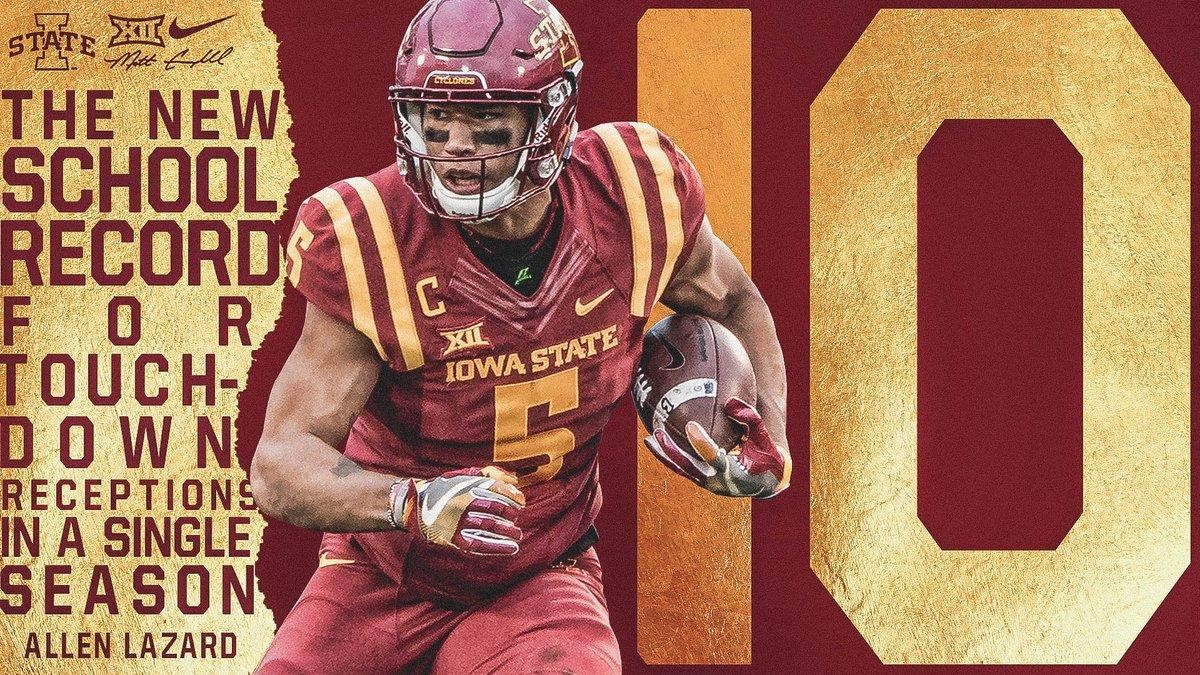 One of the most interesting prospects at WR in the 2018 class is Iowa State’ Allen Lazard. Lazard a four-year starter at ISU doesn’t nearly get the credit he deserves in a deep but not explosive WR class. What makes Lazard so interesting is the pre-combine takes on him and how the difference of opinion is so night and day amongst the dynasty community very early in the rookie scouting process. I was able to catch a few Iowa State games live this season as well as check out his game tape so I’ll break down his strengths and weaknesses to help you break down his game.

We start with Lazard’ size, he was listed at 6’5” 222 lbs while playing at Iowa State but measured in at 6’4” and 227 lbs during the senior bowl. Lazard plays to his size and in a class filled with some monster sized WRs he fits in very well. Although coming into the draft as a four year player at ISU Lazard is still only 22 years old and may not even be scratching the surface of his potential yet. Lazard coming off a career at ISU where he started all four years and because of the all-time leader in school history in receptions with 241, consecutive games with a reception at 48 games, consecutive 100-yard games with 4. Lazard also is the all-time leader in receiving yards with 3,360 and 100-yard receiving games with 12. Although Iowa State isn’t exactly a hotbed for recruiting elite talent these numbers are certainly impressive.

Lazard has already solidified himself as a productive player to many pro scouts getting him an invite to the NFL combine at the end of the month in Indianapolis. Lazard has as many doubters as he has supporters and he seems to have a chip on his shoulder to try and prove those wrong who are overlooking him. NFL scouts believe he can improve his draft position greatly with a solid combine and a good 40 time. The weaknesses to Lazard game are obviously questions on his speed and his ability to get separation. He has struggled with drops in college and unfortunately during the first day of practice at the senior bowl that issue resurfaced but as the days progressed he showed great improvement in that area. Lazard has struggled with burst and quickness to get out of his breaks and although his route running is good it needs to improve at the next level.

Now we look at the strengths of Lazard’ game and there are plenty of them to get excited about. Lazard finished his career at Iowa State with 26 total touchdowns. During his four years run at ISU, he was able to increase his receptions and touchdowns in every season. In his final season, he led the Cyclones in receiving yards and touchdowns and helped his team reach their first bowl game since the 2012 season. Lazard has great upside as a red zone threat for his future team in the NFL he showed that as a senior at Iowa State scoring 10 touchdowns while having at least one touchdown in 8/13 games. A real positive to his game are the ability to step up when he’s needed the most and that showed big time in 2017 with his team as 31 point underdogs against #3 Oklahoma he had 3 catches for 69 yards and the game-winning 25 yard touchdown to upset the Sooners all while playing with a backup quarterback. Lazard saved one of his best for last as well in his first and last bowl game in college he had 10 catches for 142 yards and a touchdown against Memphis. In the Liberty Bowl against Memphis Lazard had a 119.3 QB rating when targeted according to PFF. 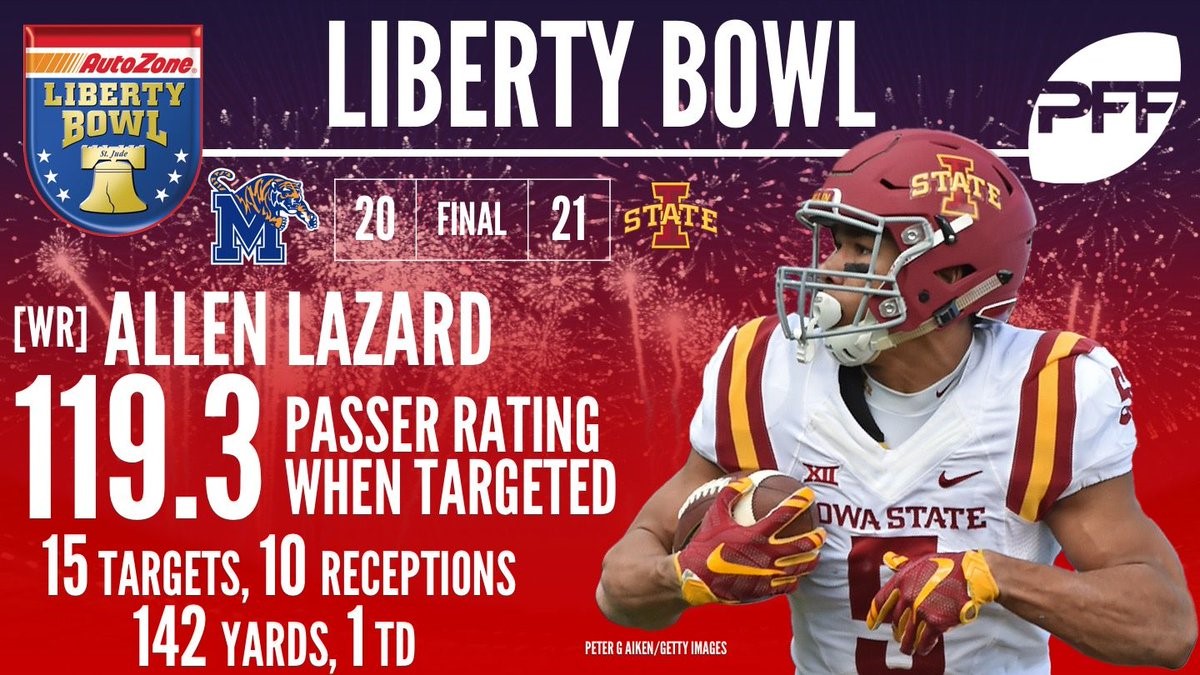 We have to remember that Lazard isn’t playing with an elite level QB at Iowa State and his two worst games of the 2017 season he had 6 catches for 21 yards and two touchdowns vs Iowa and 3 receptions for 21 yards and a touchdown against Texas Tech. As a dynasty owner, I personally am taking his two worst games of the season on my roster any day. I think for the most part I’m certainly alone in this opinion but I see some of Brandon Marshall in Lazard’ game. They both are big strong hands catcher wideouts with an ability to step up in the clutch. Now while Marshall rarely struggles with separation or route running I think Lazard has massive improvements to make in that area. A strength of Lazard’ game I haven’t heard many touch on, are his skills as a tactician at wide receiver. Although most will point to his lack of athletic ability to get separation it’s worth noting how well he uses his eyes to set up routes and throws. Lazard is a super smart player who studies the game well and paired with a bright QB in the NFL could make an impact as a rookie.

During his time at the Senior Bowl Lazard stood out to a few scouts with a three-touchdown practice. A prospect with the rare size, speed, and smarts like Lazard don’t come around often and the fact that pre-combine he is so undervalued in the dynasty community is one of the reasons I decided to write this piece. According to DLF’s most recent rookie rankings, Allen Lazard currently sits at 36 with four yes FOUR quarterbacks going ahead of him in one QB formats. Also ranked as WR15 in this class according to these early rookie rankings at that price I will own Lazard in every dynasty league I’m in. Now with a solid showing at the combine, it’s possible Lazard rises up rookie rankings and draft boards but when you watch the film of him you have to come away if nothing else at least interested in him as a pro player. There is always a chance of him being a bust but there’s just as high of a chance of Sutton or Ridley being that same bust without spending without having to spend that high draft capital. While we are doing our rookie scouting it’s important to look at those late round rookie picks that have a chance to star in the NFL. Last years class alone should be a wake-up call to all dynasty owners that third, fourth and fifth round rookie picks although they are essentially throwing darts hold value if you put in the work.