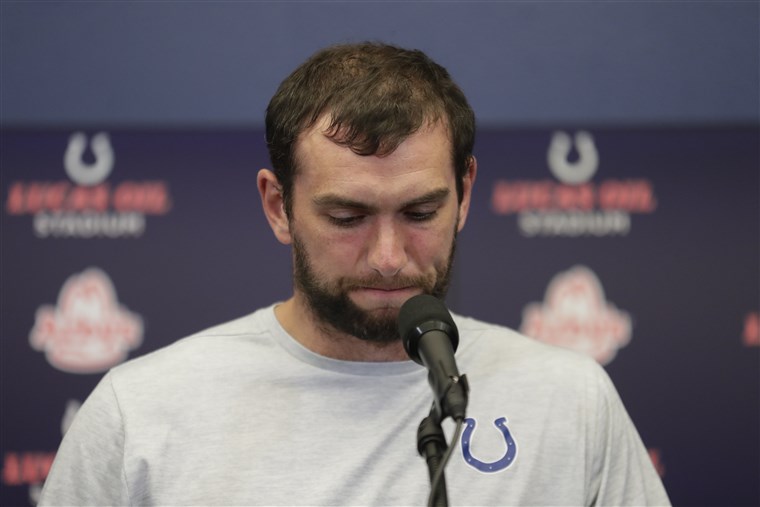 Andrew Luck shocked the football world when–seemingly out of nowhere (and in the middle the Indianapolis Colts’ 3 preseason games)–he announced his retirement from the NFL.

Filed to ESPN: Andrew Luck has informed the Colts he is retiring from the NFL, per source. There will be a press conference Sunday to make it official, but Luck is mentally worn down, and now checking out.

The Indianapolis Colts – The Colts have known about this decision for 2 weeks. Andrew Luck had planned to tell his teammates on Sunday, but “his timeline got moved up”. This isn’t something the organization was planning, so there will likely be some significant difficulty in transitioning a playbook into one that better fits Jacoby Brissett.

Jacoby Brissett – With Luck’s retirement, Brissett’s fantasy value just skyrocketed. The Colts had shown a reluctance to trade Brissett this offseason, now we know why. While there will be some retooling and adjustment, the team seems to have been already preparing for Brissett to be the starter for at least week 1–though they surely hadn’t prepared for that to continue for the whole season. When he started for the team for the entirety of the 2017 season, he managed to end the season as the QB20 overall while leading Offensive Coordinator, Rob Chudzinski’s offense to a 30th place ranking.  It’s unclear if Reich can make Brissett into a QB1, QB20 should be his floor. In 1QB leagues, Brissett deserves a look from owners that don’t have a clear top-10 option or lack a bye-week fill-in. Brissett will need to take some steps to improve on his career 59% completion rate. The draft capital spent on the offensive line the past two years should benefit Brissett. In Superflex and 2QB formats, owners seeking to acquire him should view him as a low-end QB2 and price accordingly.

The skill position players – Many of the newer faces to the roster – Devin Funchess, Parris Campbell, even Eric Ebron – were brought in with a team vision that also included Andrew Luck. With Luck’s retirement, their usage and value becomes unclear, and the timetable for a breakout from Parris Campbell is likely to be pushed out. Now is a good time to try to buy low from those that were excited about Campbell; for people that were expecting Campbell to contribute as a starter, it would be wise to seek a cheap alternative option. T.Y. Hilton saw his value impacted with Brissett under center in 2017, ending his season as the WR27, only to have a bounce-back season with Luck in 2018 (WR14). With Brissett now back, his value will likely end up being somewhere in between. Marlon Mack is perhaps the only Colts skill position player that doesn’t have a significant impact upon his outlook: while Brissett hasn’t shown a tendency to check down significantly more than other quarterbacks (his average yards per attempt in 2017 was 6.8 compared to Luck’s 6.3 in 2018), the coaches seem to want to involve him more often in the pass game, so he may end up being a good safety valve option.

Andrew Luck – Andrew Luck doesn’t sound like he’s going to change his mind in a year and unretire (to go play for, say, the Patriots). At this point, it’s pretty clear that his value is officially zero. However, it would be ok to hold his roster spot–at least for a few days–in the unlikely event that new information changes that.

Find me on twitter @SuperflexerFF Are you in the #NerdHerd? For just $2.99 per month you can get the best dynasty information in the game. Additional podcasts, rankings, buy/sell tool, and more.