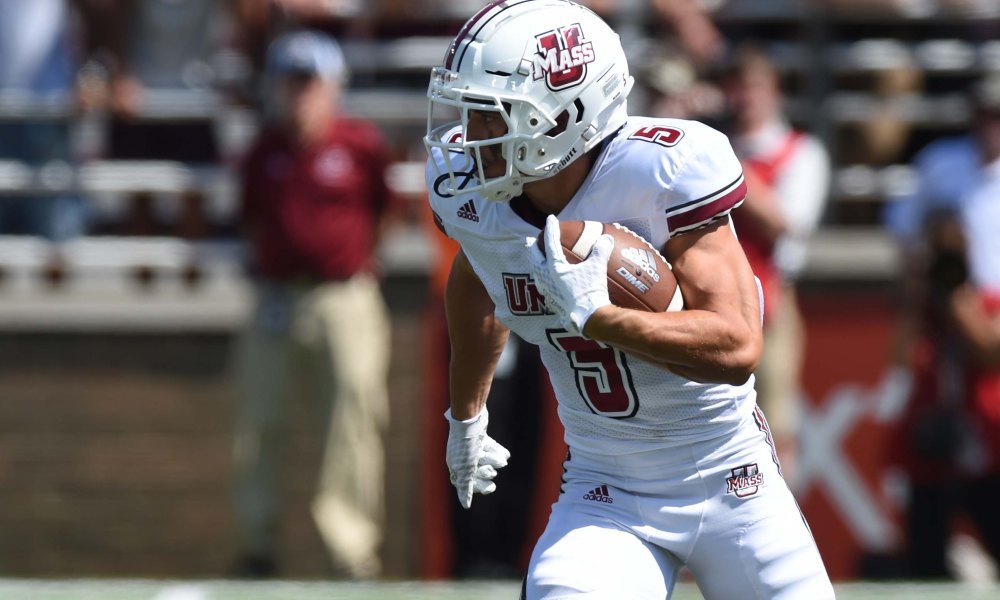 We’re deep in the midst of the 2019 offseason and rookie drafts are kicking off. Normally by this time of year, we have established a “consensus” 1.01 rookie pick. This year, however, has been vastly different. While many dynasty owners are targeting the likes of N’Keal Harry and Josh Jacobs with the top pick of their drafts, I’ve got my eyes set on a different prize…Andy Isabella.

I know what you’re thinking: “Gilbert, you’re crazy!” And trust me, I’ve heard it from everyone, even getting berated by complete strangers on Twitter. My reasoning for Isabella at 1.01 is as follows:

Let’s break them down one by one.

When I started watching film on Isabella, I didn’t expect to be high on him. I saw him as an undersized receiver playing for a small football program. But with every snap, he grew on me. I couldn’t get enough. I easily watched over 10 hours of tape on him. When I ran out of available cutups on YouTube, I scoured the internet for full UMass games. I don’t say this to brag, but instead to illustrate the fact that the following observations I took away from Isabella’s games were consistent throughout each film session.

This was the most evident of all my observations. Isabella absolutely destroyed cornerbacks at the line of scrimmage. Anytime he got a free release, he was at his top gear in the blink of an eye. While this is a great quality, there are many straight line speed guys in the NFL. What makes Isabella special is his ability to change directions on a dime and get back to that top speed quickly. He left cornerbacks looking silly as they failed to change direction at the same pace.

If Isabella wasn’t a football player, I’m convinced he’d have a career ahead of him as a magician. He has some sort of ESP because he knows exactly where to run on unscripted scramble drill plays to help out his quarterback. If he can show that kind of instinctive play with the likes of Ross Comis and Andrew Ford, I can’t even begin to think about what he’ll do with a Heisman Trophy winner throwing him the ball.

Do you remember the one kid in grade school that was impossible to tag during recess? That kid is Andy Isabella. He was so slippery on tape, consistently picking up yards after the catch. He doesn’t just lull defenders to sleep in the open field, he rocks them, gives them a binky, and then steals their lunch money before they can even comprehend what happened.

Isabella is one of the most versatile wide receivers I’ve ever had the pleasure of scouting. The uneducated will say he’ll be limited to the slot due to his size, but I firmly disagree. He can play outside and be just as effective as guys that are 6 inches taller. On top of that, he’s an excellent return man.

It doesn’t get much better than this for Isabella. He led all FBS wide receivers in 2018 with 1698 receiving yards (200+ more than the next closest player). He was one of only two receivers with at least 100 receptions as well. That’s all fine and dandy, but surely that was due to the fact that he played at lowly UMass, right? Wrong. In his three seasons as a starter, Isabella played eight games against opponents belonging to Power 5 conferences. In those eight games he had 47 receptions for 738 yards. That’s an average per game statline of 5.8 receptions and over 92 yards, which is more than many of the receivers that had the advantage of playing with superior teammates.

Isabella functioned as the sole offensive weapon for UMass, as evidenced by his 52.2% Dominator rating (97th percentile!). That makes his production that much more impressive since he was facing the top defender(s) from each team. He was not a “one-year wonder” a la Hakeem Butler either. He posted two 1000-yard seasons and a third with over 800 yards, along with a breakout age of 19.8 (70th percentile).

I alluded to this earlier when I mentioned Isabella’s acceleration and quickness, but he tested exceptionally well at the NFL Combine. He ran a 4.31-second 40-yard dash, which puts him in the 96th percentile for that test. His vertical and broad jumps were above average, which says a lot considering he has much shorter legs than most receivers. He demonstrated good strength for his size with 15 bench reps as well. His cumulative test scores were enough to net him an 87th percentile SPARQ score. While athleticism is the “end-all-be-all” for evaluating NFL wide receivers, being athletic certainly does help.

I don’t typically advocate drafting players based on the order in which they were drafted in the NFL draft, but Isabella being selected in the second round confirmed my pre-draft thoughts and feelings towards him. Spending a second-round NFL draft pick on a player is a big investment. Isabella will likely be given every opportunity to prove himself with a longer “leash” than wide receivers drafted in the later rounds who will have to earn their opportunities to see the field. I think it says a lot that Isabella was drafted ahead of pre-draft favorites like DK Metcalf, Hakeem Butler, and Kelvin Harmon. The Cardinals have a new regime at the helm and they wanted Isabella to be a part of that.

New Cardinals coach Kliff Kingsbury is an offensive-minded coach who excels in running an “air raid” type offense. He was the offensive coordinator for Heisman Trophy winner Johnny Manziel and his team led the SEC in rushing, passing, total, and scoring offense. At Texas Tech he coached Baker Mayfield and Patrick Mahomes. In 6 years at Texas Tech, Kingsbury’s teams only once finished outside the top 23 in scoring offense. Why does this matter? The Cardinals are being built to become a high-octane offense. Isabella was the first weapon drafted for Kyler Murray. It would not surprise me to see this duo being talked about as one of the best in the league within a year or two.

While other owners may prefer to stick to ADP when it comes to rookie drafts or choose to trade down if Isabella is their target, I’m perfectly comfortable drafting him at 1.01. For me, he is a “can’t miss” prospect and I won’t risk getting draft sniped by trading out of a higher pick. Do yourself a favor and grab as many Isabella shares as you can.

‘Why David Montgomery’
Undrafted Rookie Free Agents to take a shot on.