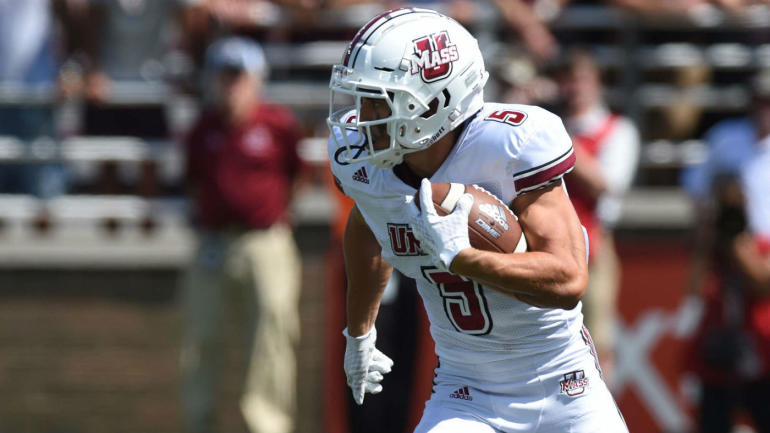 So much attention for this draft class has centered around the depth of the WR position. A lot of focus has been on the likes of N’Keal Harry, DK Metcalf, and Tyler Johnson. However, in my opinion, and underrated and underappreciated WR is Andy Isabella. He reminds me a lot of a Cooper Kupp type prospect.

Andy Isabella was a Fred finalist in 2018 for UMass. The 5’10”, 190-pound receiver has an incredibly versatile skillset and led the nation in receiving yards per game (141.5) on his way to being named a Consensus All-American in 2018.

Isabella had a statistically outrageous Senior season, finishing with 102 receptions for 1,698 yards and 13 TDs in 12 games (whilst catching passes from Ross Comis…hardly an elite talent). A full breakdown of his college stats can be seen below:

Despite lacking prototypical size for a Wide Receiver, Isabella still possesses impressive athleticism. In high school, he was a talented track sprinter, even beating Denzel Ward in State Championships.

Isabella will be attending the Senior Bowl soon (hosted by the Raiders), and has been graded by PFF as the highest rated WR in college football this year. His QB had a 129.2 passer rating when targeting him, as well as forcing 18 missed tackles.

Isabella may be penned as your stereotypical slot role WR, however I think he can win all over the field (much like Cooper Kupp). He will be a fantastic possession WR who I believe will be able to make an instant impact at the NFL level due to his polished routes and hands. After reeling in 30 TDs through his college career, he clearly has a knack for finding the end zone too. Furthermore, Isabella’s 4.16 yards per route run ranks 5th all time among the college ranks. Only Amari Cooper, Davante Parker, Michael Gallup, and Rashard Higgins eclipsed his mark.

In a recent interview, Isabella stated that he models his game after Antonio Brown. He noted, “I’ve always enjoyed watching Antonio Brown. I think a lot of guys my size would say Antonio Brown. He’s not a big receiver but he’s incredibly intelligent out there. He runs crafty routes and finds little ways to get open.”

It’s difficult to say where Isabella will be ranked in terms of the NFL draft and rookie drafts. We’ll see how the Senior Bowl and combine pans out before gauging stock, but I’d be delighted if he’s available in the 2nd round of drafts in a few months. Walterfootball currently ranks him as the 25th WR in the class….if that holds up, I think he’s a total steal.