One of the fastest RBs in the 2020 class, McFarland offers a tantalizing skill set. @ReflipeWThenuz is hear to break down his tape and prospects. 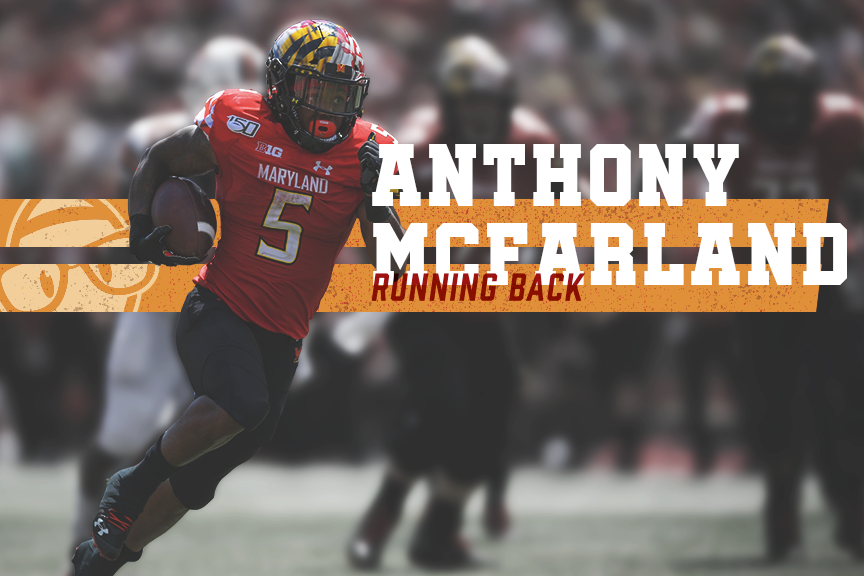 Anthony McFarland Jr. is one of my absolute favorite deeper RB prospects in the 2020 class. Of all the players who left school early, this is one of the more curious. McFarland burst onto the scene out of DeMatha Catholic High School just outside D.C. He was one of the top recruited RBs in the entire nation. At one point he was ranked as high as the number 2 RB in the nation behind D’Andre Swift. Coming into college he was also an accomplished receiving back. At the 2016 Under Armor All-American Combine he reportedly taunted DB coach Deon Sanders about the way he was abusing his players.

McFarland chose to stay at home after being recruited by College heavyweights like Alabama, Penn State, Miami, and Georgia. During his first season, he hit the magical 1,000-yard mark while splitting time with Ty Johnson. In particular, his games against Ohio State and Indiana were amazing showcases of the skills he possesses. You can see his entire 2018 Ohio State film in our film room.

McFarland was unable to replicate his freshman success during an injury-plagued sophomore season. In particular, he was hampered by a high ankle sprain that sapped his speed and explosion. Noting his lifelong dream to play in the professional ranks McFarland chose to forego his final two years of eligibility and leave school with the stats you see below.

When you watch the film on Anthony McFarland the first thing that jumps off the screen is his speed. He was reportedly clocked on a fully automated timer at a 4.34 40. He routinely beats defenders to the edge and presses up the field. It is hard to tell if this is accurate or not but his game-breaking skills are evident in the clip below.

McFarland pairs his elite top-end speed with above-average balance. Watch in the clip below how he is able to plant his foot in the ground, and immediately burst through the hole getting upfield. This skill would match perfectly with a zone-blocking scheme.

Even though McFarland came to College Park as a well-respected route runner he was not often used in this capacity. Maryland did not feature their RBs as pass catchers. Throughout two seasons he managed a paltry 24/199/1 stat line as a receiver. You can see from the play below that while he was not often used as a pass-catcher he is more than capable in this department.

While there is certainly a lot to like about Anthony McFarland Jr. he has areas he needs to improve upon at the next level. McFarland will need to add as much bulk as possible to his frame to hold up to NFL punishment. He has shown a willingness to work as a pass blocker but will undoubtedly need work on his technique and blitz pickup recognition. He tends to attempt to use his speed as a trump card in most situations and will need to learn to be more selective about bouncing outside. Sometimes it is infinitely better to pick up 4 yards then to do too much and lose yardage.

There is plenty to be excited about when it comes to Anthony McFarland Jr. as a prospect. He will bring elite speed to the next level on legs that have seen precious little use. When I watch his tape I see something between Jamall Charles and Justice Hill. He will likely be tasked as a committee player at the next level. Pairing him with a bigger bruising tailback will help alleviate the punishment he takes, while at the same time allowing him to make use of his unquestionable natural abilities. Depending on just how fast he runs in pre-draft testing, I would expect McFarland to be drafted in the middle rounds of the NFL draft. Depending on just how high he goes I would anticipate McFarland going between the 2nd and 3rd rounds of your dynasty drafts. Keep an eye on this talented back.