Are We Really Buying Mike Davis in 2021?

Can we really buy into Mike Davis for 2021? I examine the Atlanta Falcons RB room and look at some RBs that could be joining the team soon. 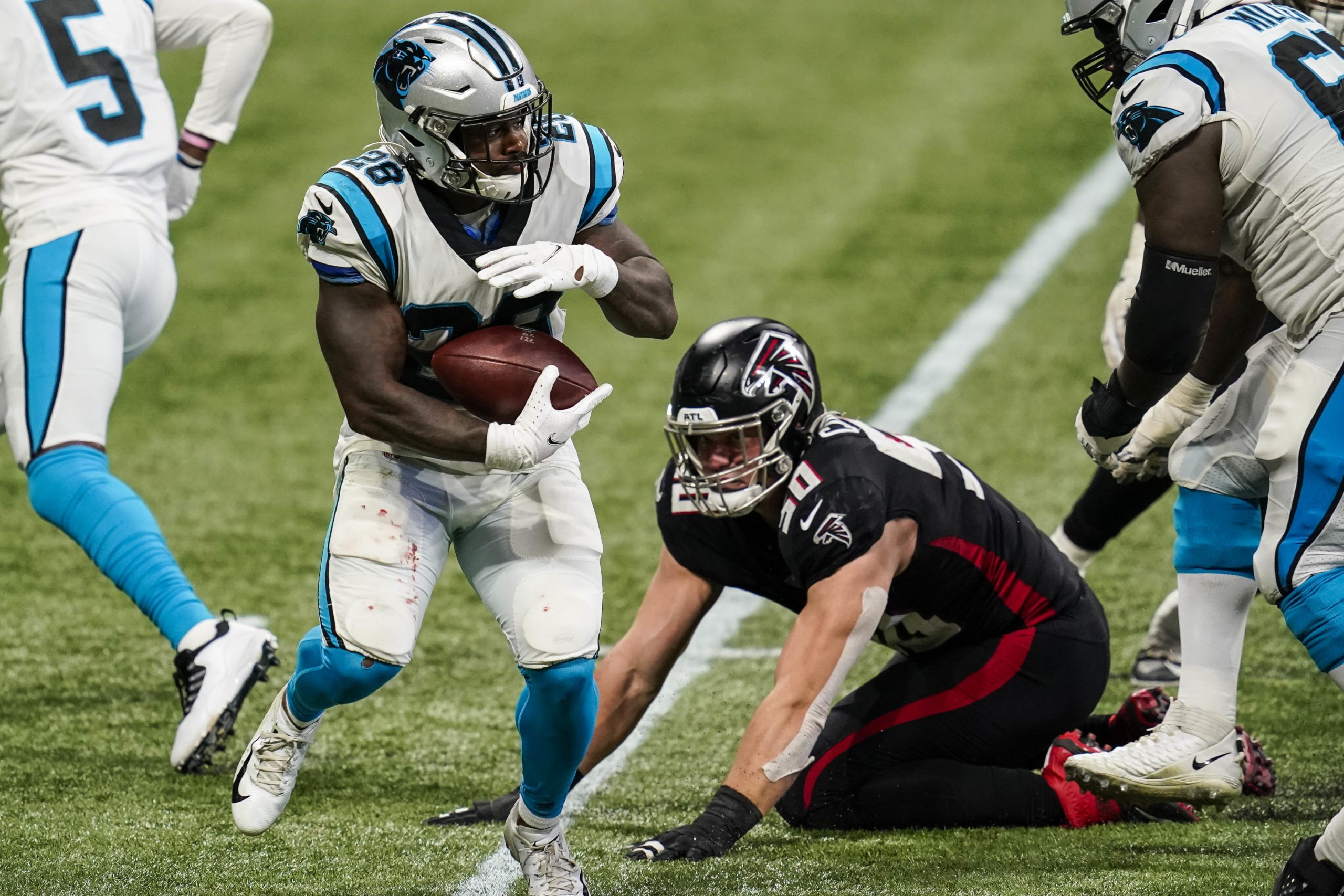 Last season, we saw Carolina Panthers RB Christian McCaffrey go down with an injury early. He would return later only to suffer another injury. That would lead to McCaffery missing 13 games in 2020.

Running back Mike Davis would replace McCaffery in his absence. Davis finished as the 12th ranked running back in PPR leagues. He tallied over 1,000 total yards on 224 touches. I wouldn’t bank on Mike Davis being the same player for the Atlanta Falcons in 2021.

Why I’m Not Buying In

It’s easy to look at the NFL Draft and Mike Davis’s stat line from last season and sell yourself a story. Consider that for the first five weeks of McCaffrey’s absence, Davis averaged 20 points per game.

He would limp to the finish line averaging 12 points per game after that. Davis only posted double-digit points in three of his final eight games in PPR leagues. If you’re a Davis owner, I think that now’s the perfect time to get out.

The Falcons had plenty of positional needs to address in the draft and punted at the running back position. Teams in this position fill their holes via free agency after the draft. However, the Falcons don’t have any cap space. They have such little cap space that they can’t even sign their draft picks. That’s why we’ve been hearing that the Falcons are trying to trade WR Julio Jones.

When the trade takes place, we should expect some form of competition brought in for Davis. I’ve examined the market for potential league-winning trade targets that the Falcons could acquire to compete with Davis.

With such a crowded backfield, Michel’s likely to be cut as we head into the season. While handling 79 carries last year, he averaged almost six yards per carry. That led the team at his position. Michel still looked like a quality running back with some gas left in the tank.

Rumors are that the Patriots are interested in Jones. If they strike a deal, it would be mutually beneficial to swap these players. Both teams would get the cap relief needed.

The way things stand today, Michel’s currently being traded for a late second or early third. I believe that he’s worth taking a flyer on for championship contenders. If this move ultimately pays off, you could recoup that pick plus more down the stretch.

Admittedly, I’ve been one of the biggest fans of RB Royce Freeman since the Broncos drafted him. Things haven’t worked out for either party, unfortunately. With the recent drafting of RB Javonte Williams in the second round, Freeman will be lucky to crack the roster.

I don’t envision a trade that makes sense for the Broncos and the Falcons regarding Freeman. He would more likely be a roster casualty when the roster gets trimmed to 53 players. Freeman averaged nearly 500 yards in his first two years in the league. In the two years before 2020, he averaged at least four yards per carry.

While Freeman isn’t a burner, his frame fits the Demarco Murray/ Derrick Henry running back mold. Freeman’s 5’11 and 238 pounds compared to Derrick Henry’s 6’3 and 238lbs.

Currently, Freeman’s sitting as a free agent in most leagues. If he’s not available on the waiver wire, he’s worth trading a third to fourth-round rookie pick for. It’s a cost that he could easily surpass with a new situation like with the Falcons.

Last on the list is RB Gus Edwards sitting on a one-year deal with no guaranteed money with the Baltimore Ravens. He’s likely to be yet another casualty of the final 53 man roster.

Gus Edwards has been anything but a plodder for the Ravens the last three years. He has posted at least 700 rushing yards and over five yards per carry each season throughout that time. Edwards isn’t the sexiest name to own in dynasty. However, he does provide good value relative to his price.

Edwards is currently going for an early to mid-second-round pick. His production should easily equal or exceed that if he enters the right situation.

I think he’s another high-end target for the Falcons and plays for a rumored team in the market for Jones. The fact that Edwards is stuck behind RB J.K. Dobbins on the depth chart and has high-end production, he’ll likely be involved in any trade between these two teams. Like Royce Freeman above, he has the Demarco Murray/ Derrick Henry frame that Arthur Smith likes.

Other names that come to mind that are virtually free today are running backs, Adrian Peterson and Rashad Penny. It’s a challenging game to guess which of these backs will dawn a red and black jersey in the fall. I’d imagine by the time we get there, at least one of these players will be in uniform, ready to deliver you solid RB2 numbers with RB1 upside.

Make sure to keep it here at Dynasty Nerds, where we bring you all things dynasty. Join the nerdherd to get more exclusive content! Also subscribe to our YouTube Channel!