Arthur Smith Rises Up To The Challenge In Atlanta

Atlanta has tabbed former Titans OC Arthur Smith as the next Falcons Head Coach. @ReflipeWThenuz tackles the coach, his fit, and his affect on the Atlanta dynasty assets. 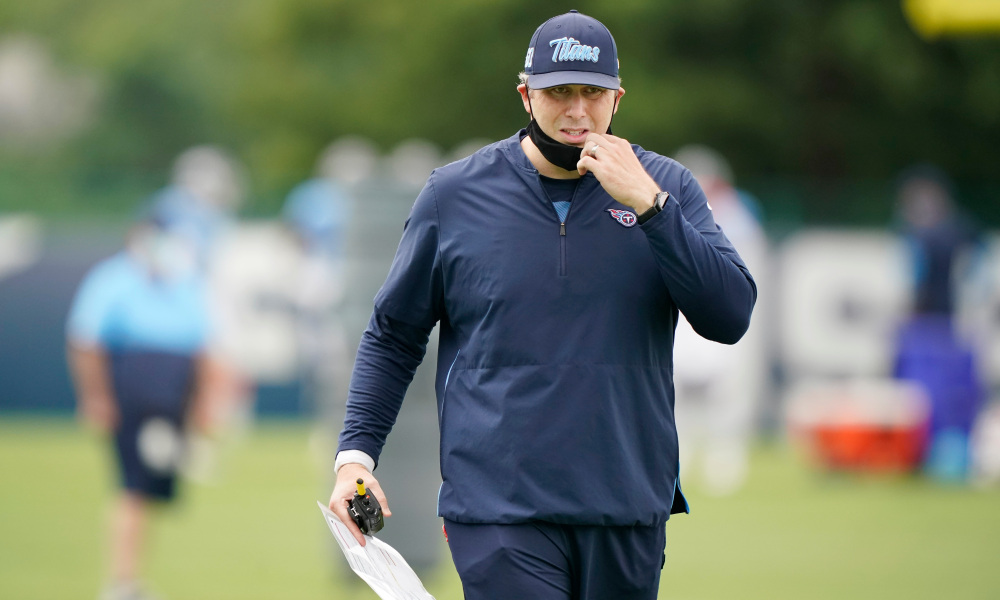 The Atlanta Falcons will have a new head coach in 2021. Owner Arthur Blank has pivoted from former head man Dan Quinn and his defensive background. This time around, he has chosen a young offensive mind in 39-year-old Arthur Smith. The former Titans Offensive Coordinator has directed one of the better offensive units in the league over the past two seasons. His arrival is good news for the skill players in the Falcons huddle. Without further ado, let us examine Arthur Smith and his likely impact as the new Atlanta Falcons Head Coach.

In each of the past two seasons, Smith has led the Tennessee Titans to a top-ten scoring season. Two years ago, he helped the team move on from the loss of current Green Bay Head Coach Matt LaFleur. In his first season with the playbook, Smith coaxed a top-ten scoring mark out of his team despite undergoing a change under center. This past season Smith helped the Titans build upon their success and coached a unit that was second in yards and fourth in points scored. His players enjoyed breakout seasons across the board, helping to lead to his hiring as the Atlanta Head Coach.

As a play-caller, Arthur Smith relied on a heavy dose of the running game. These efforts were bolstered by an ultra-efficient play-action passing game. Having come up through the ranks as a TE Coach and playing offensive line in his own right, Arthur Smith also makes excellent use of the TE position. Aside from the running back position, the Atlanta Falcons are a team pre-made for a coach like Arthur Smith. They have a veteran former MVP QB, two excellent WRs, and a former 1st round pick TE who just turned in his best season as a pro. If they can address the RB position via free agency or the draft, the team will be off to the races.

Matt Ryan will have no problems fitting into Smith’s system. One of the main reasons Smith got the job was his shepherding of Ryan Tannehill through his career resurgence. The former Miami first-round pick enjoyed career-high numbers in completion percentage and TDs despite fewer attempts. In short, Tannehill became one of the most efficient QBs in the NFL. You can see those numbers below.

Matt Ryan is superior to Tannehill in every area except for athleticism and rushing ability. He has routinely been one of the best pocket passers in the entire league, winning the 2016 NFL MVP. He has repeatedly shown the ability to feature two WRs in the same system. During his time with Hall of Famer Tony Gonzalez, Ryan was able to bring the TE position into fantasy relevance.

Heading into the 2021 season, Matt Ryan will be 36-years-old. Due to rules changes that protect the QB position, players at that spot are playing longer. His 2021 salary is fully guaranteed. Furthermore, while there is a potential out in his contract after this year, a 26-million-dollar cap hit in 2022 all but assures Ryan will be the QB of the Atlanta Falcons for the foreseeable future.

The addition of an offensive-minded head coach, coupled with returning a quality set of receiving weapons, makes Matt Ryan an attractive buy-low in Superflex leagues. Many have forgotten about the former MVP as he has entered into the elder statesman category of NFL QBs. While his attempts will surely be down, his efficiency will likely go up if Smith’s track record with Tannehill is any indication of things to come. This is a quality hire from the QBs standpoint and should produce excellent numbers for your dynasty squads.

At this point, we really do not know who will be the top RB for the 2021 Atlanta Falcons. Last season’s top two RBs, Todd Gurley and Brian Hill, are both free agents. Neither is likely to be back with the team under the new staff. This leaves holdovers Ito Smith and Quadree Ollison as the top two RBs on the depth chart.

Atlanta is shaping up to be the top destination for a rookie or a free agent RB. The Titans have been third in the NFL in the percentage of rushing plays the past two seasons. Arthur Smith loves to rely on the running game and leaned heavily on the Tennessee hammer Derrick Henry. You can see the run vs. pass percentage below.

Derrick Henry has led the NFL in rushing each of the past two seasons under the guidance of Arthur Smith. I fully anticipate the Falcons aggressively targeting a big workhorse type RB who can handle a full workload. Henry’s fellow Alabama alum Najee Harris would be an ideal candidate. It is also possible that the team could target a bigger type of free agent such as Jamaal Williams or Gus Edwards. No matter who is toting the rock in Atlanta, they are in for a heavy workload and will represent a blue-chip addition to your dynasty squads.

In Julio Jones and Calvin Ridley, new Head Coach Arthur Smith will have one of the best one-two punches at the WR position in the entire NFL. The Titans were no slouches in this department themselves, with Corey Davis falling just 16 yards shy of giving Tennessee a pair of 1,000 yard receivers for the first time in team history.

Last year veteran WR Julio Jones flashed the big-play talent that will have his bust resting in Canton one day. Unfortunately for him and the Falcons, Jones missed several games and, in the process, snapped a series of six straight years of over 1,200 receiving yards. He unquestionably still has the talent to make things happen in Arthur Smith’s system. The real prize here will be Calvin Ridley. The former Alabama star is coming off a breakout campaign, which saw him set career numbers across the board. His 90/1374/9 stat line proved he is ready to take the torch from his mentor, much like Julio took over for Roddy White years ago.

Both Calvin Ridley and Julio Jones remain attractive dynasty assets for your squads. While not as pass happy as previous coordinators, their new coach has displayed a willingness to incorporate the WR into his scheme. If any of your league mates are scared about the prospect of Arthur Smith and his run-heavy scheme tanking the Falcons pass catchers, do yourself a favor and cash in their nerves. Calvin Ridley remains a priority buy and building block for dynasty squads. At the same time, Julio will be a value buy and perfect addition for a team seeking a win now asset to help them chase a 2021 championship.

Hayden Hurst is the unsung beneficiary of Arthur Smith’s arrival in Atlanta. Smith came up through the Titans system as a TE coach. He oversaw the late-career blossoming of Delanie Walker and the development of Jonnu Smith. Throughout his time with the Titans, the TE position has been a key area of his focus.

A former first-round pick of the Baltimore Ravens, Hayden Hurst was traded to Atlanta this past offseason for a 2nd round pick. He finally got his chance to play an every-down role with the Falcons in 2020. Given a chance to play, Hurst rewarded the Falcons and his dynasty owners. His career numbers across the board were good enough to give him a low-end TE1 finish. You can see his numbers below.

Hayden Hurst represents a quality buy for your dynasty squads. Many owners panicked after the ouster of former OC Dirk Koetter and his friendly offensive scheme. Hurst seems to have lucked out with his new coach. There is plenty to like in his game and still more room for development. Buy Hayden Hurst as a low-end TE1 with room for some upward mobility.

At first glance, the hiring of Arthur Smith may not seem like a sexy move by the Atlanta Falcons. The 39-year-old does not have a high flying pedigree like other offensive minds such as the string of recent Andy Reid disciples. However, when you peel the layers back from the onion, you find an excellent offensive mind who has guided two consecutive top 10 scoring units. He has helped shepherd Ryan Tannehill back from the abyss and turned him into a franchise signal-caller. Furthermore, he has unleashed Derrick Henry leading to a pair of rushing titles. In short, the future appears bright for the Atlanta skill players. As the old saying goes, the only certainties in life are death and taxes, but for now, I’m looking to buy Falcons skill players heading into 2021.

Thank you for reading this article! Please be sure to join the #Nerdherd so you don’t miss out on any of the amazing things we have to offer Dynastynerds.com. You will get rankings, extra podcasts, and access to our rookie film room. For just a couple bucks more you can get access to our revolutionary DynastyGM tool. So much for so little, why miss out on all the fun. Follow me @ReflipeWThenuz for more dynasty content and other musings.

Fantasy Impact: Robert Saleh to the New York Jets
Can Urban Meyer put the roar back in Jacksonville?