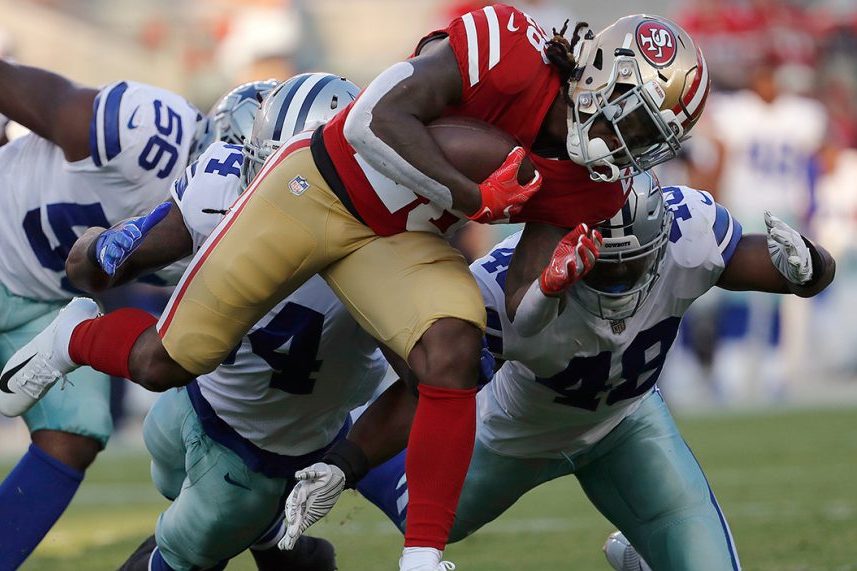 The San Francisco backfield was one we knew would get more complex this season with McKinnon coming back from the ACL, but now it is as complicated as ever with the signing of Tevin Coleman. Coleman’s familiarity with Shanahan’s zone running scheme should give him an advantage for earning touches, but Matt Breida had solid production last season and Jerick McKinnon is a SPARQ freak. Who will ultimately be the back to own in San Francisco? No one really knows, except for Shanahan probably, but hopefully Running Back Vision can shed some light on who projects to be the more productive back in this system.

Above is a breakdown of the sample size, percentage of schemes and stacked boxes, averages of defenders in the box and defensive rank from a rushing yards per game standpoint. An impact category has been added to identify the number of explosive plays observed in the sample as well. Breida saw the most outside zone plays and stacked boxes but faced the weakest defenses. Coleman had the most impact plays speaking to his explosiveness. McKinnon saw the most inside zone and man blocking in the Vikings offense in 2017.

Breida showed the best overall vision of the group and had the most consistent burst on film. As a reminder the “balance”, “power”, and “agility” percentage are completely opportunity dependent, thus making them less useful for evaluating the best back, but it is here for flavor. What matters is the success rate (details in Green Bay Backfield Battle) where we can see Breida’s superiority in this area.

Based on the percentages of outside zone that Breida ran last season, we can use this as an expectation of what the 49ers offense will look like moving forward. Outside zone being heavily favored, gives the following data a little more weight.

Based on this, we should begin to ask ourselves, “why on earth did they add Coleman?” Obviously his a much weaker fit in outside zone than the other two options from a vision and success rate perspective in this scheme. Breida’s burst indicates he may be more decisive and quicker to exploit the point of attack, but we do see McKinnon’s athleticism stick out to us here with more demonstrations of balance and lateral agility. This is probably still advantage Breida here with vision, burst, and success rate being so close with McKinnon in this scheme. He gets this advantage because of experience in execution of Shanahan’s offense.

Breida’s overall numbers indicate that Shanahan does not discriminate between inside and outside zone, so this area is equally important in identifying the best fit for “lead back”. The evaluations yielded the following data:

Again, Breida appears to have the advantage with better consistency in vision and burst than San Francisco’s other two options. Amazingly, Coleman appears to stand up and throw his name in the hat as an option with a superior success rate. This is likely because of his explosiveness and impact plays in this scheme. Being that Shanahan loves each zone concept equally, perhaps this is the “why” behind bringing Coleman into the fold. For inside zone, perhaps Coleman can put a feather in his cap.

Even though the 49ers offense only appears to non-zone run blocking schemes less than 20% of the time, it is still important to rotate in an offensive scheme to keep the defense honest in the running game. We can see below that Breida and Coleman see the field a little better than McKinnon, but Breida is utilizing his vision better with a higher success rate than either of the other runners. McKinnon seems to be the least of these in man blocking which is disappointing being that he saw more of it in 2017 than either of his counterparts did last season.

One thing that stuck out during these evaluations is that outside zone seemed to be a stacked box beater often. While that might not hold true outside of this sample, it sure was interesting. Stacked box success is incredibly important for those shorter yardage and compact field situations that often determine drive sustainment.

Though McKinnon had the best vision in this area, Matt Breida wasn’t far behind and was far more successful. This calls into question whether Breida’s decision making is simply superior to McKinnon’s once recognition occurs. There were many instances where McKinnon would recognize a filled gap, make an elite level slide to the open gap, but then not trust his athleticism and speed advantage over a pursuing defender. This manifested itself in him cutting upfield too early into the defender’s grasp, ending a potentially more explosive play. Based on the data above, Breida is who we want on the field in these stacked box situations, but Coleman must stay far, far away.

Running Back Vision is currently scoped to evaluate each player/prospect purely as a runner. With the receiving game to be integrated later, for now we simply lean on the stats. McKinnon is the most accomplished receiver of all of Shanahan’s options. McKinnon has had two seasons of receiving production that surpasses anything Coleman or Breida have accomplished. McKinnon makes the most sense as he has the best capabilities in space, and perhaps this is where he fits in Shanahan’s system.

Coleman’s long speed make him a better option than Breida in routes like the “wheel” and “seam”, especially if the match up is right. In routes not requiring sharp high-speed cuts, he could blow by the mismatched linebacker.

If I were head coach of the 49ers for a season, I would utilize Breida as the ‘lead back’ in this committee bringing in McKinnon to work the passing game. This would be game planned such that we bait the defense into believing it is always pass when McKinnon is on the field, hopefully lightening the box for some explosive plays on the ground. Coleman would come in for special situations where I would need that long speed; as stated above, those seam and wheel routes.

But the reality is that I am not going to be head coach for a season, and Shanahan is much smarter than I about football. So here is what is recommended for fantasy based on the observations. Own Breida and McKinnon. Assuming McKinnon is healthy, this is likely to be a split backfield probably close to 45/35/20 (Breida/McKinnon/Coleman) split.

There is a world where owning all three would be an inexpensive proposition due to the crowded situation. Why would we want to do this? Because, injury. Breida was pulling his best LeSean McCoy impression last season where an apparent injury takes him out for the season, or at least a couple of weeks, just to return in a few plays. Also, McKinnon is returning from that ACL issue in 2018. While he has had plenty of time to return to full health, it feels like hamstring injuries (or other compensatory injuries) pop up in the year following surgery. Coleman could have hidden value, but only in opportunity presented by injury.

Get them all cheap if you can. Much like the Green Bay backfield, there is hidden underrated value in owning all of it. Shanahan’s backfields have always been productive, netting 1000+ scrimmage yards to part-time players. Therefore, if you own all of them and play them accordingly, you could benefit from around 2000 scrimmage yards worth of fantasy points over the course of the season. Get them now while everything is relatively unsettled. Do your homework on each game in the regular season so that you are prepared if the split becomes “unpredictable”. This preparation will allow you to seem like a genius when smashing people with the various options in this backfield throughout the season. Prioritize these running backs as such:

If you decide to take on this challenge and play this backfield, I am already applauding you. This type of backfield is where I believe there is a “market inefficiency” as it were, that smart players like those of you reading could maximize. So the only question left is, “why haven’t you acquired them?” Only you can answer that. Until the next Backfield Battle featuring my very own Philadelphia Eagles!