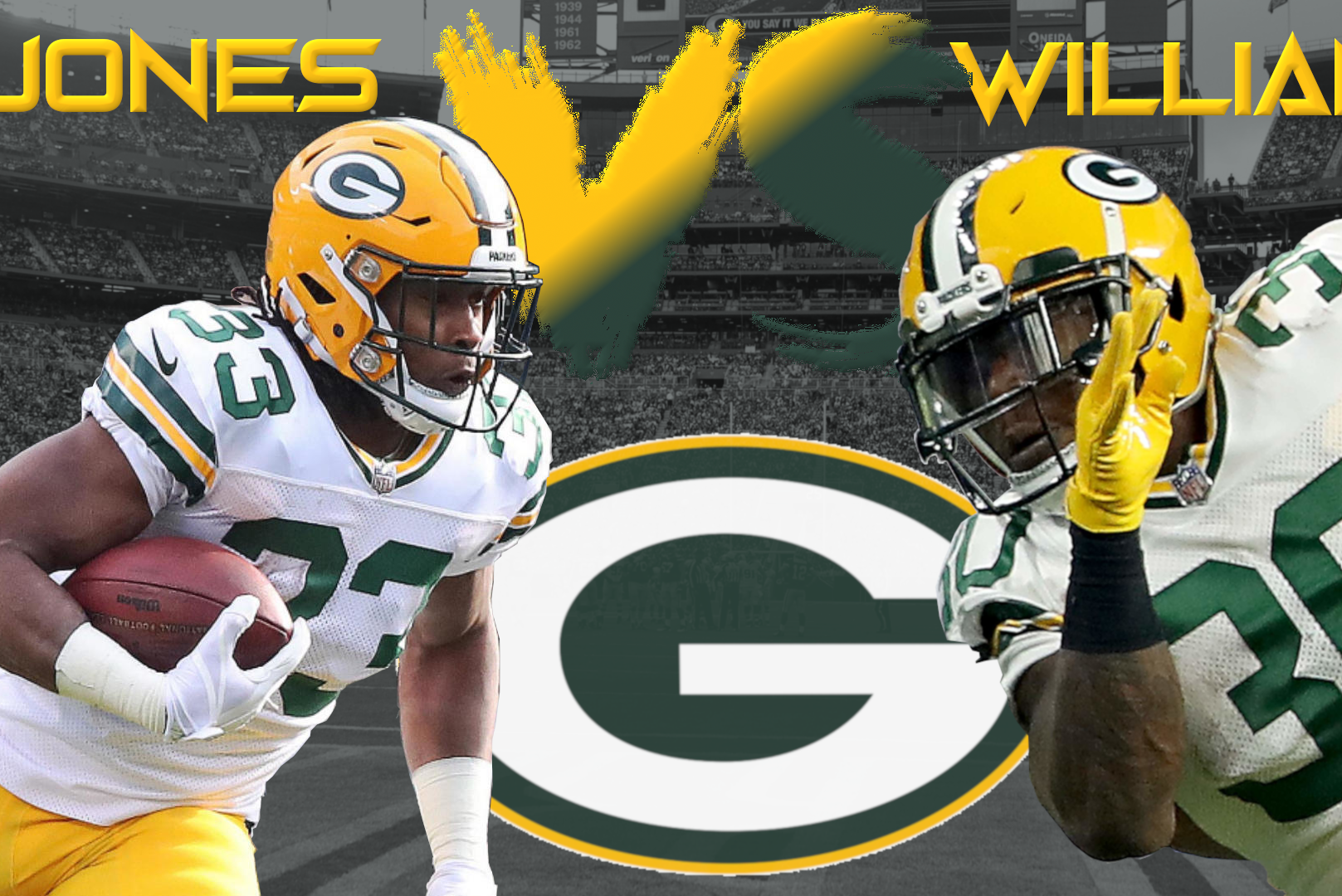 This whole idea of Jones and Williams being used in a true committee approach is sickening. The popular opinion is that Aaron Jones should be the primary back in Green Bay. He has had a few dings and off-field issues reducing his playing time, but when he is on the field, he is one of the more dynamic running backs in the league.

What Does the Data Say?

According to Football Outsiders data, Jones success rate (55%) was markedly better than that of Williams (45%). My own evaluation of success rate is revealed later. In 2017, Williams had the advantage on third down as the better blocker and receiver, but it seems that Jones has closed the gap since then, at least in the receiving game. In 2018, Williams only edged out Jones by four receiving yards, but still Jones had slightly better yards per reception.

Just when it appeared McCarthy was realizing the error of his ways related to backfield deployment, he gets kicked to the curb. But what we can see from the game logs is Williams only saw more than 14 carries when Jones was out. Most telling was the difference in TDs when Jones suited up to play. From weeks 9 – 13, Jones scored in every game. Add to that, Jones per carry average from weeks 4 – 8 where he averaged 5.13 yards or more. Williams only eclipsed a 5 yard per carry average 3 times over all of 2018. Comparing performances against top half defenses, Jones had 85+ scrimmage yards in 3 of 6 games, where Williams only eclipsed that mark once in 9 games.

Effect of the Coaching Change

Aaron Jones owners can only hope that Matt LeFleur will realize the benefits would afford the Packers by using Jones more. The scary thing is his recent history indicates that he would be committed to a committee approach given the situation in Tennessee last season where it seemed they were forcing the issue with Dion Lewis, when Derrick Henry was clearly good when he got the volume later. There is hope however, as LeFleur’s time as OC in LA resulted in Gurley getting 2000+ scrimmage yards and 19 total TDs on 343 touches. That year the second running back, Malcolm Brown, only got 72 touches. Hopefully,  LeFleur learned utilizing the best player as much as intelligently possible would be good for offensive success.

Running Back Vision has gotten a little upgrade since evaluating 2019 draft prospects. Now RBV digs a little deeper to identify the consistency of traits (focused on vision and burst) showing up on film. A layer of granularity has been added to assess each trait in the context of a given run-blocking scheme (inside zone, outside zone, and man). Success rate (discussed in detail later) has also been added to quantify each running back’s effectiveness on a per play basis.

The best and worst pairs of games were selected for each player according to their yards per carry (ypc) average in the selected contests. Here are the film sample details for context:

Jones and Williams were evaluated strictly on their consistency showing traits such as vision and burst among other aspects. This evaluation covered 114 total carries (56 for Jones, 58 for Williams) and the traits were evaluated in the context of various run-blocking schemes (inside zone, outside zone, man). Each of them was asked to do similar things from a scheme standpoint. Jones held the edge in outside zone plays which makes sense being the more gifted athlete, but Williams had more exposure to both the inside zone and man run-blocking schemes.

Given the data above it appears that Williams has the overall edge in vision, but Jones boasts his athletic advantage over Williams. Here are the info-graphics for Jones and Williams for your viewing pleasure:

This is Jones’ area where he thrives. There is no question he is better at this style of play than Williams. Given a vision consistency of 82% to Williams’ 63% it shows that Jones sees the field better when it is stretched to the edges. We also see a more consistent burst upfield from Jones in this scheme, making him the better choice.

This is where Williams seems to display better vision and decision making with a vision consistency of 69% to Jones’ 61%. Athleticism still shows advantage Jones in this scheme, however with significant differences in consistency of burst, balance, and power. Of course, balance and power are somewhat flaky metric as it is dependent on on-field circumstances providing an opportunity to display such traits.

Using 8 or more defenders as a marker for a stacked box, Jamaal Williams was able to demonstrate a more consistent vision. This would require a larger sample size to more clearly assess abilities against these hardened fronts as the difference in consistency is literally the difference of a single additional successful display of vision for Williams vice Jones.

All the above information is well and good, but what we really care about as fantasy players, and what coaches should care about as well, is how does a given player impact offensive production. Enter success rate. While the Football Outsiders’ success rate was provided earlier, this breakdown evaluates success in various run-blocking schemes. For my evaluations, this is how success is evaluated. For each play, the distance to the sticks or goal line is divided by the number of offensive downs before a potential punt. For example, on first and ten there are 3 downs with which an offense can make the line to gain (1st, 2nd, and 3rd downs). In this case we would end up with a number of 3.333 repeating (10 yards to the sticks/3 downs remaining); let’s call it a “marker”. The yards gained on the play will determine the success score obtained.

The next natural question is, “how are TDs treated?” TDs give the runner an additional point of success. Therefore:

The sum of success points across all reps for a player are divided by the total reps in the sample. This provides a number that appears as a percentage, often around or above 100%. This number is then divided in half providing a more relatable number. NFL running backs should be able to sustain a success rate at or above 50% in theory. Getting anything less implies they have far more negative or sub-par plays than explosive ones.

What does success rate tell us about the Packers backfield?

It seems the metrics would confirm the community’s perception that Aaron Jones should be the lead back. Jones had a better overall success rate to begin with (62% to 55%), and in zone concepts he bests Williams inside (54.5% to 54%) and out (91% to 59.5%). Since the Packers run a significant amount of zone-blocking, Aaron Jones must be their main guy. Jones’ success rate against stacked boxes at 70% to Williams’ 50% is the cherry on top of this cake of evidence that Jones has the superior production and upside.

What does all this mean?

Jones always appeared to be the better athlete, but there might have been a reason McCarthy had Williams ahead of Jones on the depth chart in their rookie seasons. Williams was the better blocker and it appears that he still holds the edge in mental processing. However, it seems that Jones could be closing the gap. If this trend continues then Jones could be expected to take over efficiency in man and inside zone blocking schemes. The community is pretty onboard with this sentiment already but we should prioritize Jones over Williams because of the talent upside. I believe we have seen Williams ceiling already, but Jones is still growing into his potential.

What should we do with this backfield?

This is one of those rare situations where it could be prudent to own both running backs. To succeed with this in dynasty you will need to pay close attention to the circumstances surrounding the leans in splits in LeFleur’s offense. For example, I would expect in situations where the Packers are highly favored that Jones will be on the field more than Williams. Conversely, at least in the short term, in projected underdog scenarios Williams will see an increased workload due to his ability in pass blocking.

This could be like predicting the New England backfield, which may feel like a fool’s errand from week to week. However, if you are successful, you can make the most out of the discounted options that exist in these backfields. There is a little more work involved in maximizing all parts of a split backfield, but the upside is enormous if done right!

Get both of these guys if you can. Prioritize Jones because of his athleticism and trending running ability. Acquire Williams later at an inexpensive cost. Study the first few weeks of the season to see who to play when if the splits are close to 50/50. Doing this sets you up with a built-in handcuff with usability in the split, but enormous upside for either back should an injury occur.