A young Pro-Bowler clashes with a more established veteran in the Broncos backfield. Who has the edge? How will they compliment each other? What should you do as a Dynasty GM? Dive into it with @FFB_Vern’s Running Back Vision. 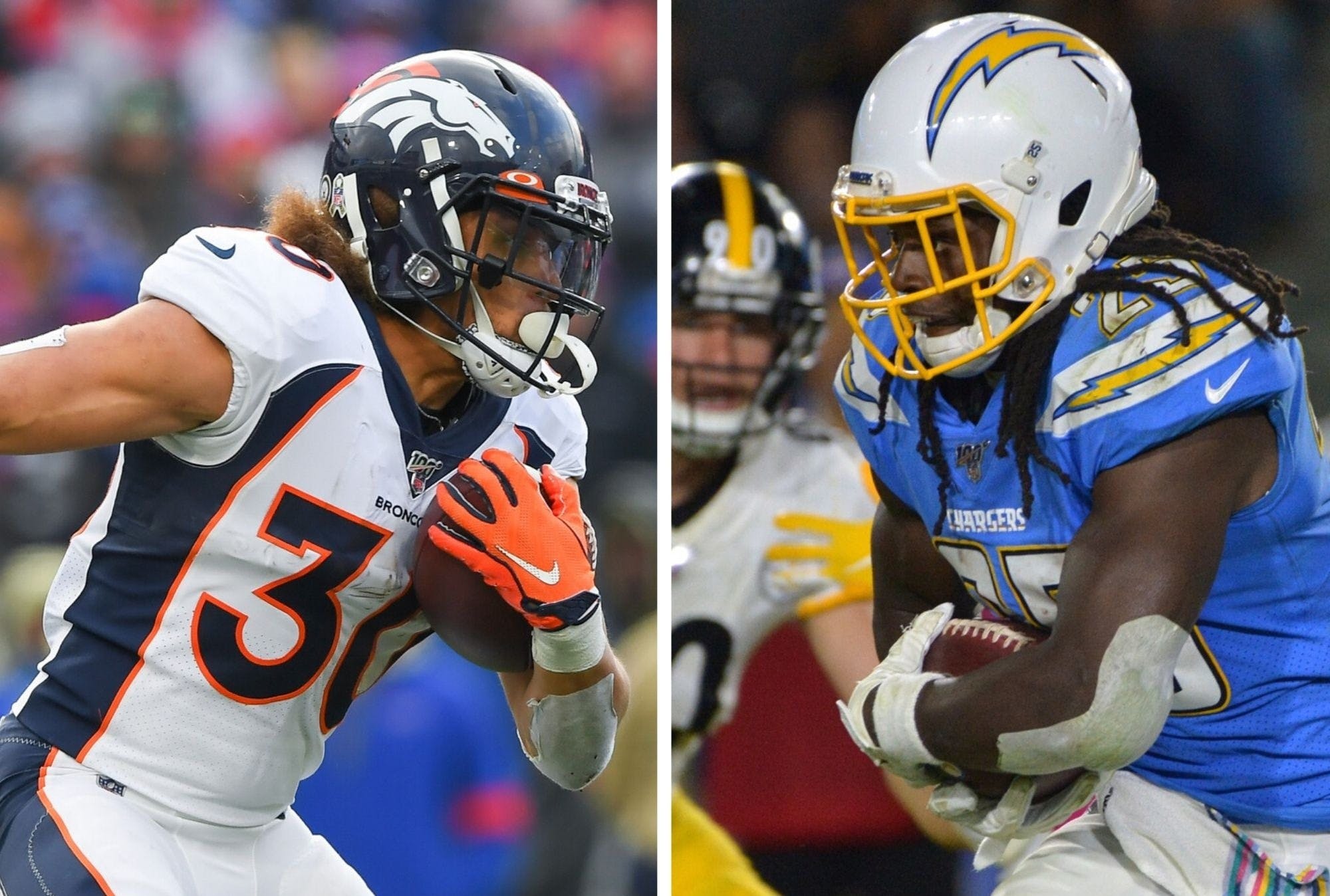 The 2020 Broncos welcome Melvin Gordon into their ranks, but is this truly a net positive? What happens to Phillip Lindsay and Royce Freeman? Who should we buy in this suddenly crowded backfield? We will put these players through the rigors of the Running Back Vision system, just as we did for the Dolphins.

Rich Scangarello has moved on to the Philadelphia Eagles. The Broncos have selected former Giants head coach Pat Shurmur as his replacement. From a system standpoint, there should be little shift in overall offensive philosophy. We should expect the Broncos to remain a West Coast offense.

Both Gordon and Lindsay have a knack for ripping off some explosive plays. To get a sense of where Shurmur was able to succeed on the ground, we can take a peek at the 23 explosive running plays Saquon Barkley generated in 2019. Most of these plays (9) came out of Inside Zone. The second most frequent scheme for explosive plays was Power. Success in these schemes can be a solid indicator for us moving forward.

As is well said in the blockbuster Broadway musical “Hamilton,” “History has its eyes on you.” Pat Shurmur’s offensive coordinator history surely tells a story, but it hasn’t been great for the run game.

Perhaps the height of his OC career was in Philadelphia. This performance comes under the shadow of Chip Kelly and the ultra-high tempo scheme he brought from Oregon. It’s challenging to credit much of that success (or even it’s decline) to Shurmur. His outcomes in Minnesota started poorly (perhaps inheriting a bad situation), but it showed his ability to improve on the ground the following year. History leaves us with an odd mix of concern and hope.

Let’s look at our two running backs. Yes, I said two, because Royce Freeman should not be expected to factor in much. Phillip Lindsay out-touched Freeman by 84 touches in 2019. If the assumption about this backfield belonging to two men is wrong, then there is no meaningful fantasy production to be had anyway. Let’s hope Shurmur doesn’t mess that up.

Looking at the results of Running Back Vision’s assessment of each of these players, we see the RBV score within each scheme.

The RBV Score takes into account offensive line performance, defensive ranking, success, vision consistency, and burst consistency. Phillip Lindsay actually shows as the better overall runner in this model. We can see his edge in overall grade comes from his significant advantage on Inside Zone runs. This is great considering the earlier mentioned tendencies of explosive plays in Shurmur’s 2019 offense.

We can see Melvin Gordon’s advantage is evident in Gap scheme and Outside Zone. While RBV includes Power/Counter concepts in the Gap category, Gordon did not have a high sample size of these types of runs. This creates an interesting “question mark” that reminds me of the “Chance” card in Monopoly. What if Power/Counter concepts were the missing ingredient that would unlock Melvin Gordon? As stated earlier, the second most frequent scheme in explosive Giants plays in 2019 was Power.

Success Rate, as calculated in this system, is baked into the overall grade, but it is worth examining because it is the most objective component. This metric is a results-based value within the context of down and distance.

For the most part, we see a direct correlation between their success and their overall score. Lindsay maintains the overwhelming advantage for Inside Zone while Gordon maintains his stranglehold on Gap and Outside Zone schemes.

The most important aspect, and perhaps the root of success, is a runner’s vision. This metric takes into account decision-making independent of the result of the play. A running back can display a good decision on a ‘no gain’ play; the defense gets paid too. This is meant to illuminate upside that would be unknown when just looking at standard statistics.

This is the money shot for Melvin Gordon. While Lindsay edges him out in overall vision, Gordon’s Inside Zone vision is slightly superior to Lindsay’s. If this surprises you, it is a surprise to me as well. The system was created for this very reason. Running Back Vision has a bias resistance built-in by charting these plays individually.

Circling back to what looked like a clear advantage for Lindsay within Shurmur’s scheme, we now have some cause to pause. This adds yet another “Chance” card to Gordon’s outlook in this new situation. This disparity naturally calls into question the quality of offensive line play. Thankfully, we have graded the line play in the observed carries.

O-line play can range from 100 (perfect blocking) to -100 (might as well have had no line). Very rarely does it reach either extreme, and there are situations where the blocking is a net neutral. Each of these runners did benefit from good Inside Zone run blocking, and the Chargers blocking was consistently better.

So what does this mean? Do we look at Gordon’s vision grade as upside, or not? While watching the tape, it did seem Gordon is simply not as shifty as Lindsay to make adjustments in the trenches. Additionally, Lindsay’s smaller build allows him to get lost in the chaos occasionally. Both runners seem to “run through the smoke” well with anticipation, but Lindsay’s feet are better equipped for change of direction.

Let’s say for a minute that Gordon’s o-line play was an anomaly, and his vision really does represent upside in Shurmur’s Inside Zone. Gordon will provide value as a back that can run with power. Gordon’s contact balance is good as well, which pairs well with his ability to finish with power.

While the metrics produced by the system did not give us a clear winner, it did give us something to keep an eye on in the early parts of the season. If the obvious metric of touches is close, watch closely those Inside Zone plays. Determine which back is being favored in that specific scheme; this is where the upside lives in Shurmur’s offense. In the same way, look at who is favored in power runs. If both schemes favor the same back, then we have our answer.

By the end of the season, the better fantasy prospect will be determined by total snaps. Melvin Gordon has a better physical profile, performance as a pass blocker, and a 60% 3rd-down conversion rate, which gives him an edge for getting third down snaps. The passing game could be the linchpin to running back snap dominance.

A look at last year’s receiving performance on Pro Football Reference gives a glimpse at the current state of running back receiving in Denver. Melvin Gordon looks like a clear winner for running back targets, besting Lindsay in targets, receptions, yards per reception, and catch rate. Gordon also has that all-important history of consistency as a receiving back.

According to Fantasy Data, Phillip Lindsay had one of the highest drop rates among running backs in 2019. Nine total drops are objectively bad. Treat statistics as indicators; they help us use tape to confirm or refute the connotation of said statistic, or at least contextualize the information. Upon looking at incomplete targets involving Lindsay, six of the nine drops could be considered concentration drops.

Concentration drops are easily fixable, and Phillip Lindsay was seeking to improve in this area. Back in December, Lindsay had plans to train with Christian McCaffrey, per Zac Stevens. COVID-19 likely destroyed those plans, but this is something fantasy owners should always look for: attempts to jump stratospheres in performance. Showing a desire to learn from top-tier performers, past or present, is an indicator we shouldn’t overlook. Don’t hear what is not being said; Lindsay will not be the next CMC in 2020.

At the end of the day, this looks to be a split backfield. While it may favor Gordon on the surface, even he is expecting their collective abilities to be an electric combination. They do compliment each other’s running style, and Pat Shurmur won’t ignore that. Unfortunately, this is less than ideal for fantasy, and we need to know who to acquire.

It’s hard to go wrong by getting both players. This somewhat insulates you from weird coaching decisions, and it surely helps with injury concerns. It is also the most expensive option unless you own Gordon already. Unlike the Dolphins’ situation where there appears to be clarity within the roles, it will be much harder to use Vegas odds and game script predictions from week to week.

If you choose to buy only one, it is hard to ignore the old adage, “money talks.” Sixteen million dollars to a running back, sure does say, “you are the one.” While this makes sense, we should read “between the lines” as it were. They can afford to pay Gordon this coin because they have a Pro Bowl, back-to-back 1,000-yard rusher on the roster that only costs them $750k this year. Do not forget those facts in bold text. Those facts will surely mean something to the coaching staff or that locker room.

Lindsay is surely cheaper than he was before Gordon showed up. This is THE buy window for him. First of all, he will be one of the best handcuff options out there. Second, he is a restricted free agent next season, which could result in a departure from Denver with a respectable contract. Assuming his rushing ability stays consistent, the potential value of the next contract improves with improvements in his receiving ability. The higher the value of the contract, the more likely he will be the lead back in his next backfield. Buy good value for 2021 like this without hesitation. COVID-19 could make the 2020 season a wash anyway.

The Broncos know they needed to improve everywhere, and they see a solution to some of their needs in Gordon. The pass-catching ability, 3rd down efficiency, and an ideal size-speed combination for falling forward after contact will serve the Broncos in ways that Lindsay cannot currently. Keep in mind, Lindsay does some things a little better than Gordon, including Inside Zone runs and a faster vision-decision-action cycle to go with his superior agility and legit home run speed.

As for a decision on what’s best for your roster, keep in mind these questions. Are you in the championship window in the next two years? Are you rebuilding? If you are in a championship window, acquiring both is best, but if only one can be had, take Gordon for two-thirds of the three-year window. If you are towards the end of a rebuild, get Lindsay for his short term handcuff upside and value increase towards the end of his three-year window.

Until the next backfield, catch my thoughts on dynasty and other concepts on Twitter @FFB_Vern.