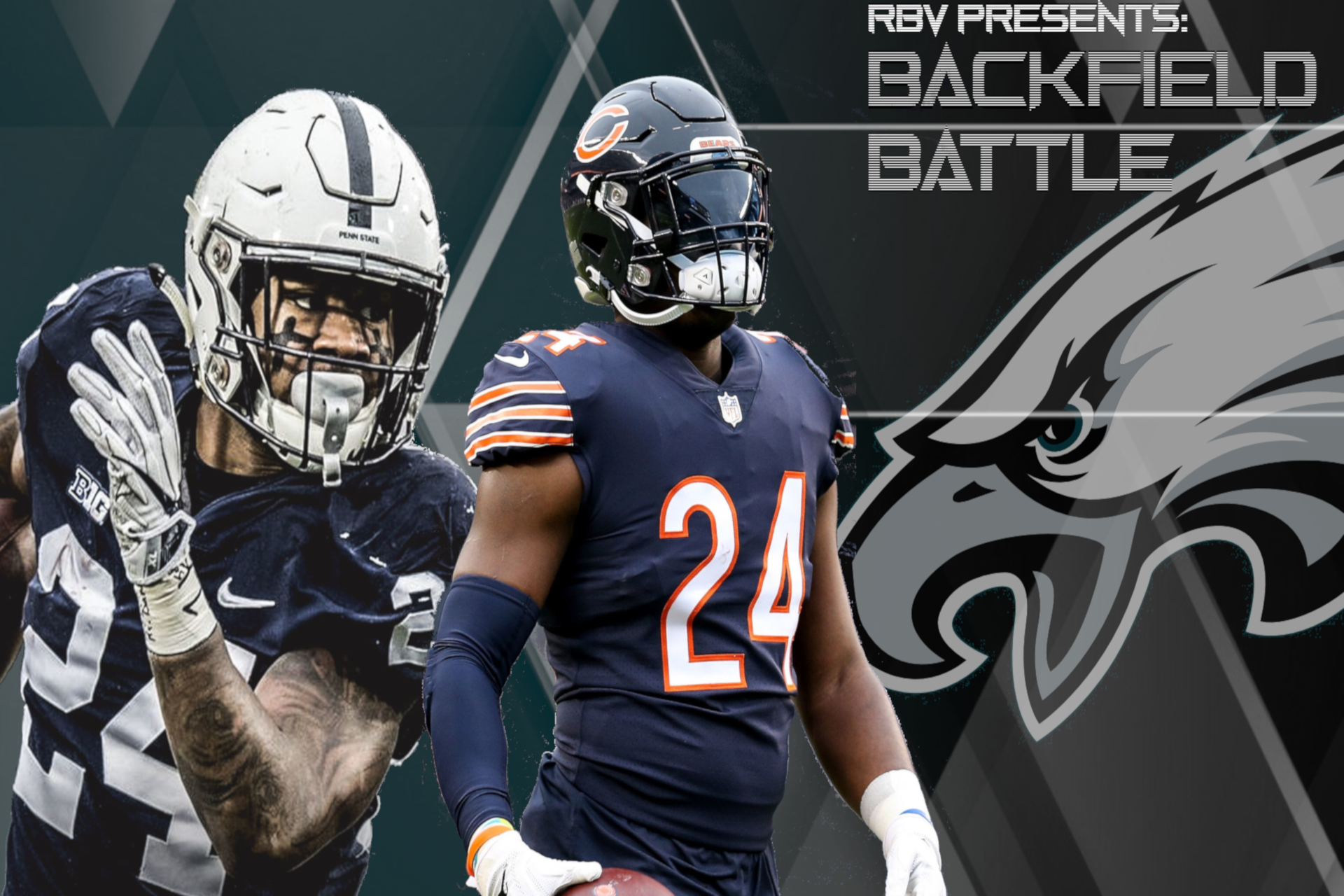 In this edition of Backfield Battles, we visit my own favorite Philadelphia Eagles. This is a little different than the 49ers and Packers articles in that the analysis focuses on no incumbent runners. Instead, we focus on one addition through the trade of a 6th round pick (could become a 5th), and yet another runner added in the 2nd round of the 2019 draft. The latter addition is atypical for Howie Roseman since he resumed control, in fact, the last time the Eagles drafted a running back this high they acquired the slippery fish known as LeSean McCoy. Eagles fans have been clamoring for management to do something about this backfield, and on the surface, it seems they have done two ‘somethings’.

Currently, the Eagles have five running backs on the roster going into the season; our two additions: Jordan Howard and Miles Sanders, and the incumbents: Wendell Smallwood and Corey Clement. If you are wondering about the leading Eagles rusher’s absence on this list, it’s simply because Josh Adams is not good. We should expect him to be cut before the end of training camp.

Now for the film study. Only two of the four listed backs were evaluated from a film perspective because Sanders has the skill set and draft pedigree to supplant both Clement and Smallwood. Below are the details of the film evaluations:

A surface look at the new additions reveals they mostly saw inside zone and man blocking. Sanders true capabilities may have been capped in the Penn State offense as his speed could have been extremely useful in outside zone. This likely explains how close they are in impact plays, but then again sample size plays a part here as well. Howard saw more stacked boxes than Sanders (understandably so) almost a quarter of the time surprisingly. If NFL defenses give him that respect, perhaps we should put some respect on his name as well. Take a gander at their consistency with vision, burst, and success rate.

From an overall perspective Sanders appears to be the better running back, but this is an out of context look. Given that Sander’s level of competition was significantly inferior we must take this with a grain of salt. However, that shouldn’t stop us from imagining what this backfield could look like if Sanders could maintain this level of consistency at the next level. If that were to happen, Sanders could take over this backfield early in 2019. But let’s bring it back to reality. We could expect the gap in vision and success to become smaller. Howard’s only superior trait is power which speaks to his style! We see this in the difference in success rates in short yardage situations (three or less yards to the sticks) where Jordan Howard had a 67% success rate to Sanders’ 61%.

The data doesn’t give us a ton to evaluate here as both players ran only small percentages of outside zone plays. Maybe we can take something away from Sanders’ performance in this are: Penn State was not great at outside zone last season based on 0 burst from Sanders. Given his 1.53 10-yard split, it makes a statement that they avoided outside zone because they couldn’t succeed at giving him good clear running lanes outside. His success rate in this area says a lot though. He would use his shiftiness and ability to chain moves together to make outside zone work.

While Howard was not as successful, we shouldn’t worry about this nor should we see a lot of Howard in outside zone looks. He simply doesn’t have the speed to make it work with any consistency.

Inside zone is the ‘bread and butter’ for the newest Eagles running backs, and the Eagles are primarily a zone and power team. The advantage of this combination of run-blocking scheme preference is that the initial movement often looks similar which should cause defenders to think about their alignment and attack strategy. Situations like this provide opportunities to bait defenders into offensively advantageous outcomes, but I digress…

Again, Sanders appears to have the advantage with better consistency in everything but power. Still, keep in mind this is out of the competitive context. This simply shows Sanders truthers they may be right to believe the hype from a ‘potential’ standpoint. On the other hand, we could see a decent share for Howard in those situations where power is of benefit, like goal-to-go and short yardage situations. Let’s pause and imagine for a second that they decide to give Howard the Blount role when he was with the Patriots. Even if Sanders gets the better side of 60/40 split, the value may lean Howard’s way with the scoring opportunity.

While man blocking schemes reduce the amount of decision-making running backs have to do by a smidge, they still have to read and react when the designed gap is not opened as planned. There were numerous observations where Jordan Howard demonstrated great vision in less than ideal situations and made effective adjustments within the context of his known limitations. Sanders showed this ability as well, and this should give the Eagles great comfort that they aren’t projecting this run-blocking scheme with either running back chosen for the play. However, this is by far the lowest success rate for either running back. However, the Eagles are a better blocking line in the context of their competition than both Penn State and Chicago.

For me, stacked box performance is crazy important. The more success a runner has in stacked boxes, the more dominant they are as a runner. That opinion is not based in research or stats; it is simply a thought shared. There needs to be some further research to see if that is in fact a thing; perhaps something on my list to dig into. Assuming it is true though, perhaps stacked box success could be a precursor to play action success as well as drive sustainment and goal line success.

I really thought Howard would have the better success rate here from what I remembered evaluating, but the metrics don’t lie about what I observed. Here we see that Sanders appears to see the field better and take advantage more frequently with his athleticism. We will have to see how this pans out against NFL competition, but it is definitely exciting.

Unfortunately, Penn State didn’t really target Sanders, but it appeared to be their offensive design. He ran a solid number of routes and many times he was split out as a receiver, but the quarterback simply had other ideas of where the ball was meant to go. Howard on the other hand, we all know is in the category of “never-throw-him-the-ball” so there was little to watch to grade his ability in this area. However, he will contribute more effectively than Sanders will in pass protection.

Pederson, Deuce, and Groh are likely to attempt to find the best balance of the worst four-letter acronym in fantasy football: RBBC. We can hope that this RBBC has only two primary members with a third (I’m thinking Clement) to spell either of these two sparingly. By week 4 or 5, assuming Sanders consistency translates well, he should be a solid 2-down back. At this point Howard will probably be one of the most valuable short yardage/3rd-down backs in fantasy; his power and pass protection practically demands this to be the case for the season.

This is dynasty, but we cannot simply always look long term. It is valuable to look at assets in three different time windows: daily (match ups), seasonally, and the three-year window. In the off season it seems that too many of us look at things from the three-year window. This is grossly irresponsible and ugly teams that find themselves on in the playoffs unexpectedly can’t properly compete because they neglected two of the three windows.

Jordan Howard is going to be important to you in this seasonal window. While the Eagles are not the same offense as the 2016 patriots, Howard could easily have high double-digit TD upside given his short yardage success rate. The Eagles, with a healthy Carson Wentz are going to move the ball so there should be plenty of opportunities. Imagine this: 12 personnel, JJAW, Alshon, Ertz, Goedert, Howard on the field, Wentz in shotgun, with a read-option look. The defense has problems. They have to pay attention to all four big targets for fades, digs, outs and slants which should lighten the box just enough for Howard to punch it in for a score. So what if we aren’t competing for a playoff spot, but Howard has been on that crazy 2016-Blount TD pace? Cha-ching!! Cash it in to a competitor with a weak RB room for a 2020 1st (which will be a later one most likely).

For the long game Sanders is the draft selection or some the running back you should pursue especially if Howard sees more work than expected (target panicking owners). He has the ability to take over eventually, and if he can prove his receiving skill set while improving his pass-protection he could take over almost completely very early in his career. The evaluation says it’s a virtual certainty he will win this job over Howard at some point, which is why I am happy to own both.

So the daily strategy, how does that work into this? When Howard is strictly third down, look for the Eagles to be favored by more five or more points. This allow us to capitalize on Howard’s probably role as “the closer” while he punishes worn down defenders (which has the upside of some big plays still). Sanders will also be played in those ‘-5’ games, but purely because he could be the reason the birds win by this margin or more. Sanders should be more valuable in close games (+/-3) because the Eagles should desire to keep the more explosive asset on the field for the best chance to win. Sanders also benefits from heavy underdog scenarios assuming he proves to be the best pass-catching back on the team for obvious reasons.

My personal recommendation admittedly has a heavy bias towards owning both backs. I want the TD upside, the dynamic explosive upside, the pass-catching upside that can be found in one back. Let’s be real though it is increasingly hard to find as the NFL moves to the committee approach. Remove my fan bias from what is presented above. Can you see a scenario where owning both has at least a 50% chance of being profitable? I know I can, and you should ponder it as well.

Players On the Way Up
From The Ashes: Darren Waller