When thinking Houston Texans and the running game, no one gets excited. This is understandable even with the addition of David Johnson. When most discount a situation as having no value, it’s worth a little digging. Who knows? Maybe there is gold. Let’s see if RBV reveals hidden value. 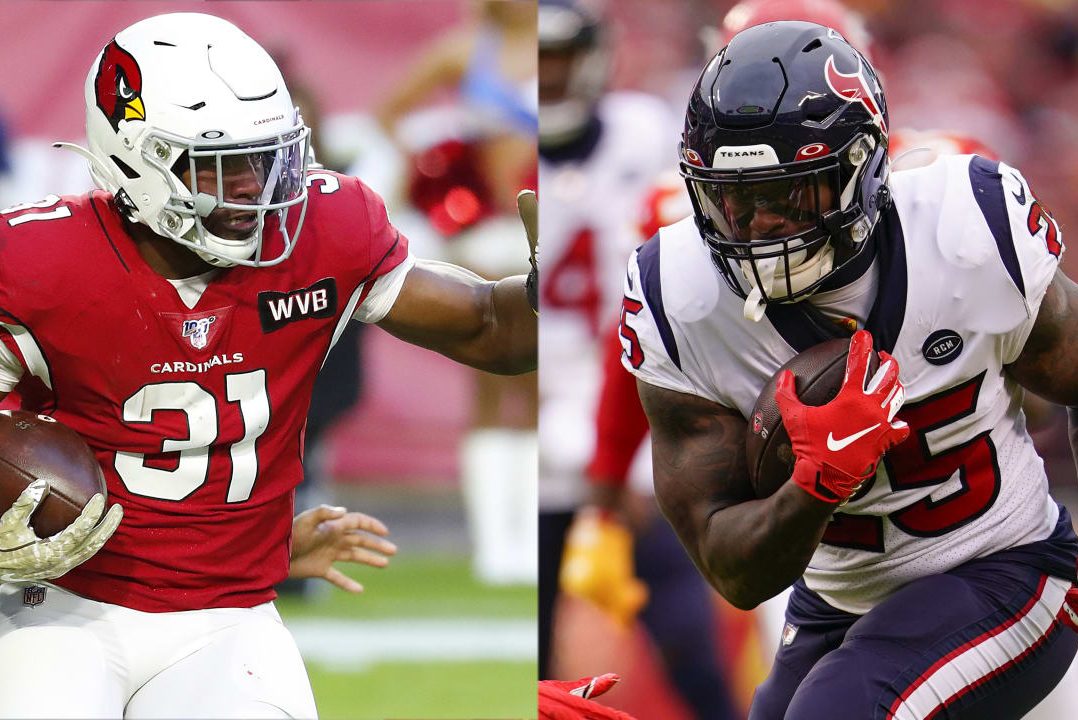 Lamar Miller and Carlos Hyde are gone, and David Johnson has entered the picture. Houston’s backfield is not the apple of anyone’s eye in 2020, but, occasionally, we can discover gold in scary places.

The flashes Duke Johnson (Duke) has shown and the history of David Johnson (DJ) could make it worth a peek.

What can we expect in 2020? Are there any indicators of unexpected usage or fantasy potential?

Although Houston won the division, Patrick Mahomes ended their Super Bowl hopes in the Divisional round. The Texans finished 2019 as 10th in yards per attempt and running game 9th in rushing production. Carlos Hyde quietly led the backfield to be 13th in the league in rushing yards (40th in scrimmage yards). Duke was the obvious passing option garnering 62 targets converting 71% of them into 410 receiving yards (44 receptions). If all this production were in a single player, they would have been 2nd in scrimmage production in 2019. Perhaps that’s what they are hoping to get out of DJ this season.

When this news emerged, it’s all but certain that a few million jaws dropped while another million of them were cackling. While dynasty value is not parallel with NFL value, it appears the Texans got beat over the head on this trade. Again, given their rushing production last season it did not seem like they were “a running back away” from going to the show. Essentially, the only way Houston comes out of this as geniuses is if David Johnson returns to his 2016 self.

Jamie Halls’ Fantasy Forecast highlights DJ’s high-ankle sprain. The effect of the injury is glaringly obvious on tape. DJ looked more like Jordan Howard than the explosive player from 2016. Recovery to 100% from that type of injury is difficult in season. With that said, we can look at the RBV data points in the proper context.

To say that David Johnson was ‘subpar’ is an understatement. DJ’s only advantage over Duke came on Inside Zone runs, but Duke is outperforming him in Outside Zone and Gap play. While this may look bad for DJ, it is good to consider that Houston favored Inside Zone over other run-blocking schemes. Assuming this continues, DJ has an edge here. If he is truly healed from his 2019 issues, we could see a potential surge back to former glory.

Both running backs had abysmal success rates. Generally, we want to see success scores in the mid 60’s and up to get excited. These scores put them both bottom 3 in the category of all the runners (9 total) evaluated for “Backfield Battles” this summer.

Comparing the two backs, we see DJ’s superior success, even while recovering from a bum ankle. As a reminder, success is devoid of any possible bias because it is based on down and distance along with the result of the play. Objectively, DJ is better overall and on Inside Zone specifically. Duke is continuing to solidify his advantage in space with higher success in Outside Zone runs.

We have to talk about the offensive lines. Even though the Texans some how garnered top-10 rushing production last season, it was in spite of the offensive line. This chart shows that DJ is not necessarily moving into a better situation. Arguably, his run-blocking situation becomes worse which potentially caps the ceiling of any bounce back that we could expect. These offensive line grades correlate with PFF’s collective run blocking grades for this group: bottom 5 in the NFL. Remember, Duke’s success came in these very circumstances. Ownership of either back doesn’t seem appetizing at this point.

Great decision-making is a requirement for production behind poor run-blocking lines. Per Football Outsiders, Houston’s line ranked 21st in adjusted line yards, just barely out of the bottom-third of the league.

Duke is showing a significant advantage in vision across the board. Part of this could be DJ suffered from a slower vision-decision-action (VDA) cycle because of the injury. Pain is quite the distraction in physical performance activities. Duke’s vision grades are eerily close to Kenyan Drake’s, and we all remember Drake surprising us running behind Arizona’s line. This advantage in vision is why many wonder why Duke hasn’t ever been given a shot to carry the load. Alas, NFL teams continue to fight logic when it doesn’t fit their convictions.

One possibility for Duke not ever being trusted with carrying the load could be plays like this one. While is vision consistency is good, there could be some issues with him getting “tunnel vision” or responding to flashes too easily. In this play below we something that causes concern. Designed as a Power run to the right, their is this ridiculously obvious gaping hole up the middle of the field.

The only explanation is that he saw the skinny path between the center-right guard combo block and the right tackle block with the lead block of Akins. However, this versus the wide open space where he could potentially end up 1-on-1 with a linebacker, there should be no comparison. Duke is equipped with plenty of tools of elusiveness making this choice hard to understand.

RBV does calculate some “advanced” scores, and given the situation, it seems helpful. As stated earlier, decision-making can get a runner out of bad spots. The above chart shows when vision is displayed while the offensive line is blowing it. A blown offensive line rep is one where a failed block (whiffed, blown back, penetrated) affects the track of the runner. This metric is an indicator of creativity, although not strictly aligned. Duke is showing an advantage yet again, solidifying his case to be a worthy depth piece in case DJ cannot stay healthy.

If you have been following this series, or any other RBV articles, you know by now that RBV only looks at ability as a running back. Through the scouting lens (and for fantasy production) we have to add to RBV by looking at the passing game. We know DJ’s history and his pass catching capability from 2016. Duke has historical usage as a 3rd-down pass-catching back.

As I stated in the San Francisco edition, I like to look for route diversity for potential upside. Duke was deployed out wide or in the slot 22% of his snaps. From that alignment he ran a lot of “Nine” routes, but there was plenty of diversity on other routes to include Slants, Digs, Outs, and shallow crossers. For DJ (17% of snaps out wide or in the slot) there was much less diversity with mostly “Go” and Out routes. However, when looking at the routes targeted from receiver alignments, DJ’s targeted routes showed more diversity. History and diversity appear to be on Duke’s side in the passing game work, but that red herring of the target diversity is interesting to keep in mind.

According to DynastyGM, David Johnson is worth a little less than a 2021 2nd. If you are confident that injury was the only thing holding DJ back in 2019, then the upside is worth the acquisition. This could be the upside we see in 2020 if it was truly just the injury standing in the way of production.

A second round pick for an aging injury-plagued veteran never sounds profitable, but no one is really believing for the 2016 version to show up. Let us remember that this recent draft was extremely and abnormally deep, thus we shouldn’t over value the 2nd especially if we are in a championship window. Unexpected resurgences, while uncommon, can make your season.

Duke Johnson is extremely inexpensive and a total “buy” in best ball leagues, especially if you can manage to acquire him for something plus a ’21 third. His pass-catching and handcuff upside cannot be ignored and the cost is nothing. The upside if something happens to DJ is real. When discussing the tunnel vision issue above, we mentioned his elusiveness. On the off chance Houston improves it’s run-blocking, we could see opportunity to demonstrate his ability as such:

Running back depth will be a key to winning this season more than ever, and Duke is still worth the acquisition or the stash.

There is a legitimate case to get both. While production may not be as lucrative as San Francisco, David Johnson believes the pair will be a ‘lethal threat’! If that proves true, the duo can be had for a little bit more than the ’21 second. If DJ appears like his 2016 self, then the pair could be a perfect game script candidate. DJ would be your main play week to week where the Texans are favored or close dogs. When they are significant dogs, play another RB over DJ, flex in Duke, and cash in on the PPR upside.

With fantasy football, dynasty GMs prefer to be on the right side of history. This is an area with options that seem less than desirable, but cost-benefit says “Buy”. The opportunity cost is low, and if somehow Bill O’Brien is actually smarter than popular opinion, we will dance again with new titles! Follow my thoughts and opinions throughout the season on Twitter @FFB_Vern!