Kyle Shanahan was about as frustrating as Bill Belichick in 2019 when it came to 49ers running backs. With Matt Breida in Miami, is it Mostert or Coleman? @FFB_Vern dives into the details with RBV. 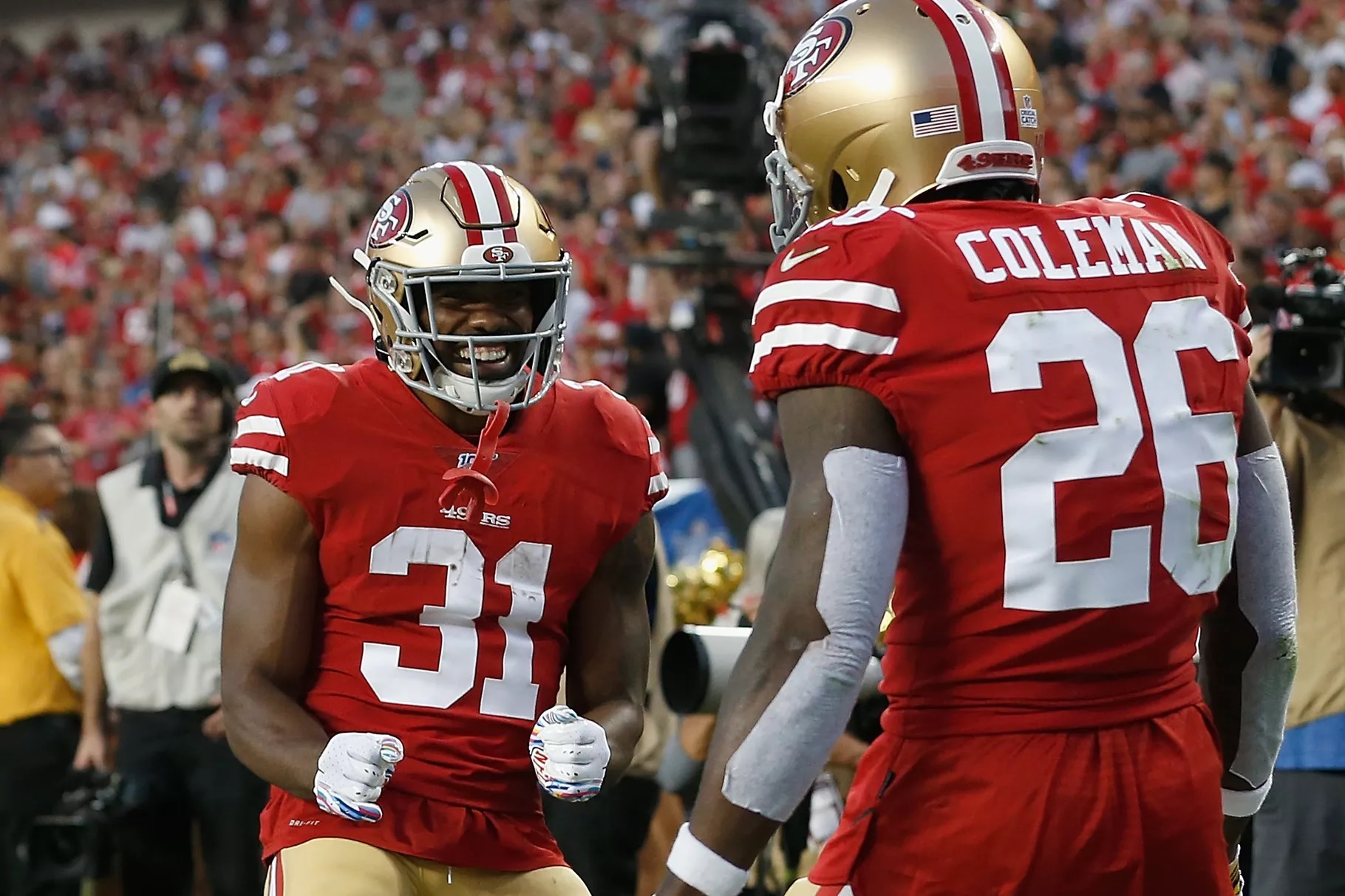 We are back for a look at another backfield, and this one was particularly productive last season. Kyle Shanahan‘s run scheme was second in rushing yards, first in rushing touchdowns (23), and 8th in yards per attempt. If this were a one-man backfield, we would be drooling over this type of opportunity and production. Alas, Shanahan has seemed to be committed to a game plan-driven distribution of carries. We will dive into the tendencies to see who will actually have the advantage and fantasy value moving forward.

Shanahan’s run scheme features heavy Outside Zone complemented with Power/Counter concepts. San Francisco was running about 56% Outside Zone and 29% Power/Counter based on observed touches. Watching the tape shows the genius up this. Essentially, if the defense doesn’t have great lateral ability overall, the 49ers destroy you on the edges. Just when the defense adjusts to the Outside Zone run, here comes Counter, which gets the opponent flowing the wrong direction to be exploited for explosive gains. In fact, the sample observed showed an 11% explosive play rate.

Hopefully, if you have read the previous two parts of this series on Miami and Denver, you are getting a sense of the value of RBV. Before starting this charting and analysis, the “eye test” suggested that Raheem Mostert would come out on top based on how the season ended. The assessment is due diligence to see if my eyes deceive me or not.

As a reminder, the RBV score adjusts for defense (based on the end of season rank) and offensive line performance on the observed carries. The RBV score appears to confirm my eye test. Raheem Mostert bests Tevin Coleman across all schemes. When using any metric to shape an assessment of a player, especially calculated ones like RBV, we must understand what is baked into it. The adjustments were stated, but it is good to look at the most objective measure of RBV: Success.

RBV success is based on a value assigned to each result. This takes into account the down and distance, sets a ‘marker’ for success, and, based on the yards gained, will assign a value of 0-3 for the run. Additionally, touchdowns are adjusted for with a bonus point, making the maximum result for any run a “4”.

Both Coleman and Mostert were evaluated for 58 and 59 carries, respectively. RBV Success shows that Mostert objectively out-shined Coleman across all categories. All downs are not necessarily equal, and it seems reasonable to look at 3rd and 4th down success as well. Even here, Mostert edges out Coleman by a success score of 43.75 to 41.67. It makes sense why he was utilized more when closing out the 2019 season.

When going through the tape, I started to develop a suspicion of the “why” behind this disparity. Before we get to that, let’s look at the all-important vision grades.

As I have said consistently through any RBV articles, vision is the most important factor running back grading criteria. I would trade superior vision over athletic ability in most cases, and if an assessment is close, vision becomes my tie-breaker.

Whoa! Wait a minute?!? Surely you ask yourself, “If Coleman’s vision is better overall and in Gap schemes, how is Mostert crushing him in success?” Part of it is Mostert still holds a vast advantage in Outside Zone vision, which has great synergy with the 49ers scheme. Mostert’s advantage in Outside Zone is an extension of vision: the vision-decision-action(VDA) cycle. It’s awesome if a runner can see the field and anticipate the best path through the chaos with 100% accuracy. However, if the brain doesn’t communicate with the body quickly enough, what the runner saw/anticipated doesn’t matter. VDA is the most important factor in a running back’s play speed.

One of the issues is that Coleman’s agility and footwork are inferior to Mostert’s. Often in the sample, Coleman could be seen making the decision, but his footwork was often not in a place where he could take advantage of the good decisions he was making. On the contrary, Mostert is better able to adjust the pace of his feet, more often being in explosive postures at decision-making time.

Coleman’s striding style of running is not conducive to adjustments at the higher end of his speed band. Interestingly enough, Coleman did not register a top-20 speed performance in any of the weeks in the sample observed, per NextGenStats. Mostert, on the other hand, clocked in as the fastest runner in the Championship round at 21.37 Mph. Raheem Mostert may not be making good decisions at the same rate as Coleman, but Mostert’s superior mind-body connection and foot discipline give him a valuable edge.

The passing game must not be ignored in running back evaluations. On the surface, Coleman was favored in the passing game from a target perspective, but Mostert made up for that with efficiency.

Catching out of the backfield is good, but the real value comes in versatility. For running backs, we should favor those with upside. Versatility in route tree diversity, when split out, is an indicator of valuable explosive plays. Both players were mostly used to run off defenders with “Go” routes. They were typically targeted as split out receivers on shallow crossers, likely taking advantage of mismatched linebackers. Breida’s vacated routes were a little more diverse, with some digs and slants included.

These two backs are a fairly even match as pass catchers. For us to get an edge as dynasty GMs, we will have to pay close attention to each player when split out as a receiver. The one who diversifies their route tree first is likely the one with additional explosive upside.

With every day that passes, it is looking like Jerrick McKinnon might be the one to carve out that role for himself. Historically, McKinnon is a better receiver than either of the other two has shown thus far. He may siphon all the passing game work for himself. His career ceiling of targets was 68, and in that season, he had a 75% catch rate with 421 yards of total production in the passing game. Touted as a SPARQ freak, Shanahan would be remiss to overlook the possible value of a healthy McKinnon.

My gut feeling is Shanahan will continue to frustrate us moving forward. Much like the Denver backfield, the game script advantages aren’t quite as clear as those in Miami. So what should we do?

For my capital, I would buy Mostert. His recent trade demand likely reduced his value. Even though he reconciled with the 49ers in an $8.7m deal, his value may still be suppressed due to the presence of Coleman and the relative unpredictability of touches. Coleman isn’t necessarily the model of “health,” tipping the scale further towards Mostert.

Because neither of these players established themselves as the better pass-catching option out of the backfield, it might be time to spend some low-end capital on the injury-prone Jerrick McKinnon. Just the PPR upside of McKinnon should be interesting enough to make a move, but there shouldn’t be much worry about him stealing too many carries. Full disclosure: I discounted Mostert’s involvement at all before 2019. Since the only way, he will break into this offense is through the passing game, he will be one of the few game script-predictable assets on the team. 49ers underdogs by seven or more? Fire up McKinnon.

Coleman would be the “handcuff” of this backfield. He still functions well in Shanahan’s system, and his familiarity should give him a leg up against anyone else. There is no harm in owning “all the guys” other than potentially pulling your hair out from week-to-week.

Vernon Meighan is the creator of the Running Back Vision (RBV) score. You can find oher articles about the RBV here. Keep watching tape and analyzing stats. Until next time, follow me @FFB_Vern for additional opinions and insights.

The DynastyGM tool is the best way to manage your dynasty teams bundle with your Nerd Herd membership for just $4.99 or get it solo for $2.99.