Battle of the Backs – Jermar Jefferson vs. Larry Rountree 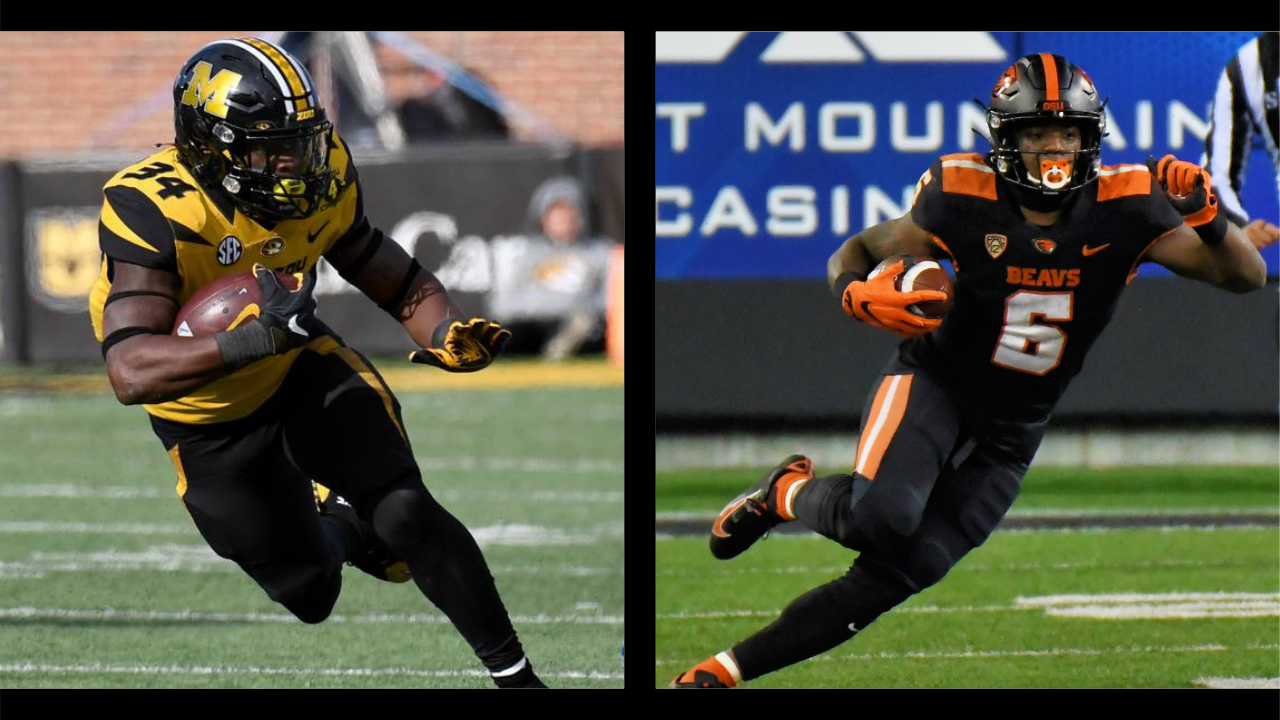 Writer Tyler Moss compares two late-round running backs in the 2021 class and how they can leap to becoming an elite NFL player.

We see the ADP of running backs fluctuate every year. With the teams choosing to invest big contracts and high draft capital on positions other than running back, quality backs are available later in drafts. These reasons are why teams seem to view the running back position as replaceable.

Teams spending late-round capital on guys like Larry Rountree and Jermar Jefferson does not mean the end of the world for their value and potential in the NFL. What does this mean for fantasy? Is drafting a late-round running back worth it for managers, and can they benefit your fantasy team?

Jefferson, the standout junior back out of Oregon State, showed lots of promise in his three years. Providing value in all three seasons for the Beavers, Jefferson showed solid development and growth as a runner. The same can be said for Missouri senior back Larry Rountree III. Rountree spent most of his tenure at Missouri taking starter attempts. Both guys have the potential to be long-term NFL backs with more development.

In overall volume, Jefferson’s stat line proved to be much more effective. While Rountree benefits from the experience of playing against a higher level of competition, Jefferson has the higher number output per game in the 2020 season.

Jefferson dominated the yards and touchdown stats when compared to Rountree. The vast competition levels between SEC rushing defenses and Pac-12 rush defenses play a role in the production. It is hard for me to see Jefferson putting up the metrics he did in his tenure at Oregon State if he had played in the SEC. Despite that, the numbers still impress greatly in the sample size.

Rountree broke out his sophomore season with over 1,000 yards. However, Rountree could not eclipse 1,000 yards in 10 games in his senior year, which raised concern. His inability to cross that threshold has some wonder he will develop any further than he did in that sophomore season.

Having the ability to read a play is vital for any good running back. Reading what you see and finding a way to break into open space consistently is high-level. Big playmakers are essential at the next level and can be valuable weapons in an offense.

Rountree’s elusive trait is the ability to present elite-level shiftiness. This skill is both positive and negative for Rountree. While I love Rountree’s ability to make plays out of nothing, there’s an element of scared running noticeable when watching his film. However, when a play does breakdown, Rountree knows what to do and can adjust for positive gain.

He uses his size well in open space. He’s a mystery to try and tackle for defenders as he uses his shiftiness just as well in attack. His shiftiness is next-level ability that makes Rountree a desirable prospect for teams looking for a solid early-down option.

Jefferson’s game is enhanced by his ability to use his speed as a weapon, and his 40-time could make him a hot prospect on the rise. The man has a burst in open space.

Jefferson will be drafted off of his speed, giving him a path to playing time for an NFL team. While he has flaws in dodging tackles, his pace and breakaway speed will inevitably get him opportunities at the next level. Special teams may lead to early-season work for Jefferson.

In the NFL, backs need to have the ability to take what they can and be resourceful. Being patient and waiting for holes, and taking the yardage given to you are essential traits for young backs.

Rountree is a very innovative runner in space and piles. He pounds hard for extra yards knows how to fall forward for every yard.

His run after contact is impressive, and while he doesn’t break every tackle, the kid has a willingness to bury his head and fight for every inch possible. This style of running is what coaches in the NFL look for in 2021. Rountree will be drafted based on this willingness to fight hard for everything. When Rountree gains confidence in his line from the start of plays, he could be an electric and dynamic NFL back.

Jefferson does a fantastic job at using his vision to find space in a minimal working room. The 5-foot-10 back gets smaller to dive into holes and wiggle free for significant plays. While he struggles to evade tacklers, he finds ways to avoid this shortcoming using this wiggle ability to get into open space.

Rountree and Jefferson both have a solid ability at creating plays when limited. Jefferson can do it with his quick feet and speed, where Rountree can use strength and sharp cutting.

The ability to catch the ball and protect your QB on receiving downs is crucial for a young back to see heavy snaps and playtime at the next level. Route running, separation, and hands are contributing parts to an effective running back on receiving downs. Perhaps the most undervalued aspect of a running back in the NFL is the ability to block for a QB. If a young receiving type back is looking for volume at the next level, pass blocking is must be in their arsenal. Pass blocking can be the window of opportunity for a young back to see an increase in volume in the receiving and eventual rushing attack.

Backs with solid development at each of these traits will benefit and find playing time a lot faster. However, with both Rountree and Jefferson, the slate is completely blank in both assets. Both need significant development at both levels of the passing-down game.

The flaw I find with Rountree is his one-dimensional abilities as an offensive threat. It’s not that he is entirely incapable of catching a football, but the lack of usage in the third and long and receiving downs makes me nervous for his long-term use in the NFL. He suffers from limited work on these downs due to a flawed offensive scheme utilized at Missouri.

While the Mizzou offense depended on running heavy (check out Missouri vs. Kentucky 2020 for reference), the team outside of this comfort zone was a mess. There may be untapped potential as more than just a running back, but he needs the opportunities and trust from a coach for it to work.

A glaring issue for Jefferson is a lack of the ability to pass block and receive. It’s pretty hard to assess young talent’s power when they do not play on crucial downs like third down. Jefferson had 18 receptions in the past two seasons, which is a glaring concern. It’s not that he cannot catch a football, but the lack of work doing so is concerning.

The same thing goes for a back in pass blocking. I don’t mind seeing failure to block someone but a coach not having you do it all tells me that you cannot, which will keep you limited in the heavy passing NFL. Jefferson must look to develop his 3rd down work if he wants to see snaps in the NFL.

Both struggled to gain roles as receivers, and neither Rountree nor Jefferson were trusted with the ability to pass-block. With that, Jefferson was given more opportunity and took the category off of experience.

I expect both backs to be selected in the draft, likely in Day 3. It is hard to find any way for one of these backs to be drafted higher, with each having holes in their game. Both backs could reach workhorse status, but development is crucial.

For Jefferson, the route to eventual workhorse or fantasy relevant status will be through the return game. His game-changing speed and elusive abilities will guide him to offensive opportunity. I see Jefferson beginning his NFL career by making an impact on special teams while he progresses as an overall natural rusher. He is a guy who carries a wide range of potential outcomes for his career, all of which are dependant on what he does to grow himself as a rusher.

Roundtree, unlike Jefferson, will have to cut his teeth, learning the system as a backup before gaining opportunity. The back doesn’t have special team speed but is a touch bit more ahead of Jefferson as a rusher. Rountree can look to gain early-down work if he shows consistent promise as an impact player for a team’s offense.

Again, both of these players’ success rests in their ability to make progress in development. Taking their skill-sets to the next level is a must for each back to make it in the NFL.

Alvin Kamara is a sell in Dynasty
Building a Dynasty Vol. 2: Importance of a Workhorse Running Back