Now that the fantasy regular season is over, which draft strategy panned out? Bell Cow RB or Zero RB? 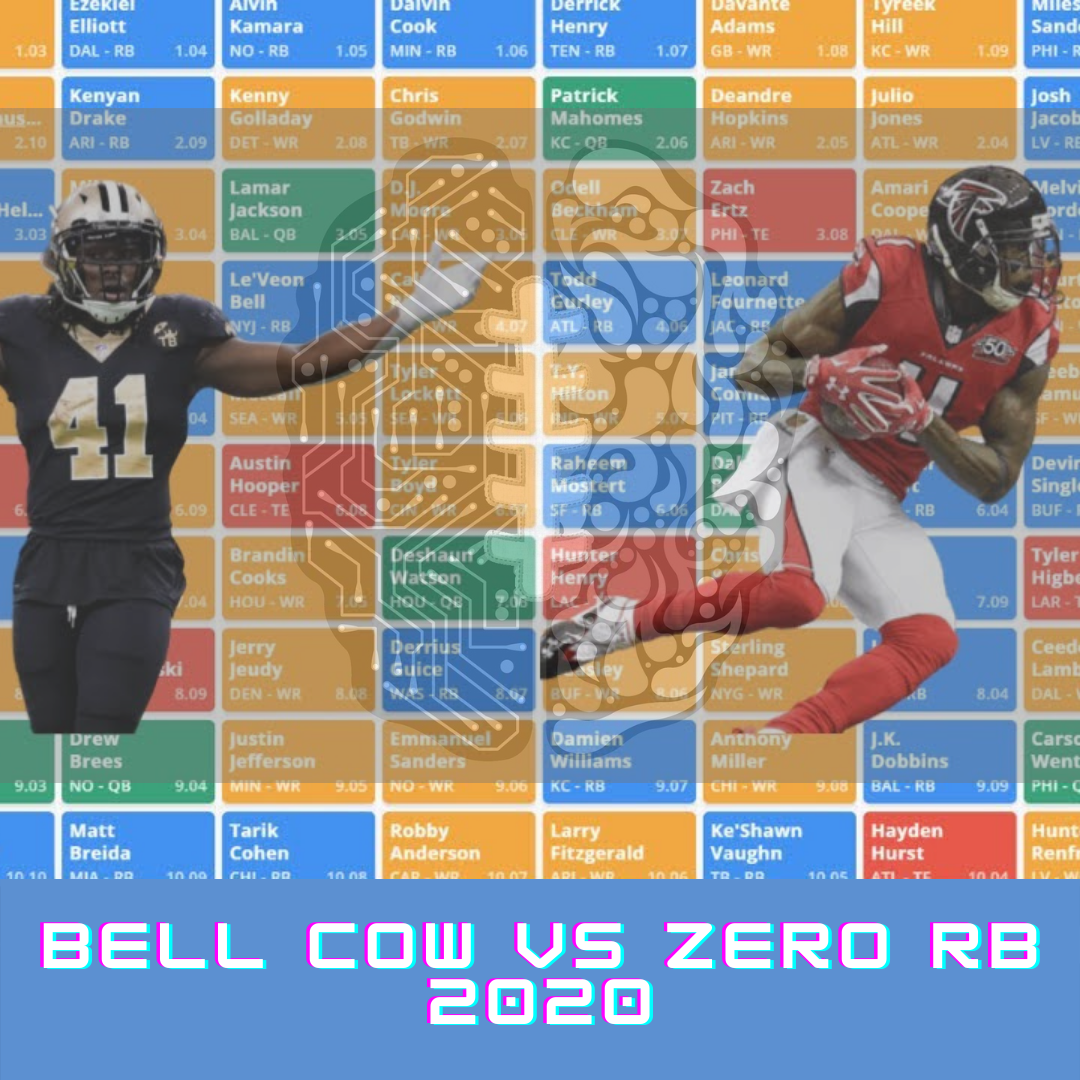 What draft strategy was the plus EV play in 2020: Bell Cow RB or Zero-RB? I’m prepared to offer an answer.

Professional analysts argue back and forth on either side of the fence in this philosophical debate as there hasn’t really been a great way to quantify which stance is correct. The trouble in devising a proper comparison is that wide receivers, tight ends, and running backs are different populations with different levels of scarcity, so you can’t simply compare points to points across positions to determine which was the most valuable in fantasy.

That is, until now. I’m prepared to offer a method capable of quantifying, on a general level, which strategy was optimal for the 2020 fantasy football regular season in the more common 2WR, 1Flex, PPR format. The answer lies in the framework of fantasy football wins above replacement. The whole point of this metric is to standardize production by position to determine any player’s value to a fantasy team. The weekly win percentage estimates what each player provides his team and can be used to compare running back and wide receiver/tight end outputs. In doing so, we can determine whether Zero RB was the clever zig or if there’s good reason Bell Cow is the traditional tried-and-true zag.

The traditional Bell Cow school of thought is pretty easy to understand; take the top names in the first two rounds of your draft before they’re gone. But Zero-RB theory has two key points that proponents feel make it the better route to go:

The engine underlying the wins above replacement model is the estimated weekly win percentages players provided to their fantasy owners. For an explanation of how these percentages are calculated, see the introductory article on wins above replacement. To account for injuries in this analysis, we’ll replace missing games for any player with the win percentage of using a replacement-level at his respective position. This best approximates the effect of injury on fantasy teams.

Let’s use the universal #1 ADP holder Christian McCaffrey to show how this works. Graphed below are the estimated weekly win percentage for McCaffrey drafters in 2020, presuming they replaced him with… well, replacement-level fill-ins:

In the three games McCaffrey was healthy (weeks 1, 2, and 9), fantasy teams averaged winning 71.6% of their head-to-head matchups. For all other weeks, fantasy managers were left finding a replacement either on their bench or on the waiver wire. The replacement-level figure for running backs was 41.1%, so it’s presumed this was the percentage teams with McCaffrey had each game missed.

Note: The replacement-level figures for wide receivers was 42.4% and 42.0% for tight ends

Simply averaging all 13 weekly win percentages provides Christian McCaffrey’s estimated value to fantasy teams for the regular season: 48%. This process is repeated for all players using respective replacement-level figures for games missed. Here is a snapshot of the top-24 (RB/WR/TE) by ADP, with the right-most column revealing the adjusted value of each player:

As the table reveals, first-round mega-duds Michael Thomas and Saquon Barkley were similarly as toxic to fantasy teams as one another as their team holders won an estimated 40 and 41% of their regular season match-ups. Meanwhile, Dalvin Cook and Devante Adams hoisted the most value for their positions (60% and 58%, respectively).

Below, all players from each position are binned by round, indicating which position group had more productive players available on a per-round basis:

Even with Round 1 busts such as Christian McCaffrey, Saquon Barkley, and a team-handicapped Ezekiel Elliott, taking a running back in Round 1 was a slightly plus-EV choice based on ADP vs. a wide receiver or tight end. In a year as down on top-name backs as it is, this is pretty incriminating evidence for team Zero-RB. Studs like Derrick Henry, Dalvin Cook, and Aaron Jones still made rolling the dice on running backs plus-EV vs. a wide receiver or TE. After Round 1, the running back pool quickly dried up, and receivers maintained considerably higher value in the other rounds. Basically, if you blinked on taking a running back early, you probably regretted it.

Of course, more running backs are taken in Round 1 than wide receivers or tight ends, so let’s dive a little deeper. Instead of binning by round, let’s take the cumulative average fantasy team win percentage for the top-x players at each position. Since we didn’t know how any of the top-ADP players would turn out before the season, this allows an ideal comparison at various stages of ADP.

Here are the results for the top-45 cumulative fantasy win percentages for RB and WR/TE groups plotted out with trend lines:

What’s interesting about this graph is the grade of the decline in the win percentage for each group trend line and where that grade begins to dive. After about the 12th running back taken in drafts (midway through Round 2), a much steeper decline is observed for the running back group vs. the wide receiver/tight end group. The more gradual decline of the latter group signifies a better pool of receivers later on in the draft.

With this all said, the performances of Devante Adams, Tyreek Hill, and Travis Kelce certainly made waves in the top-ten of the group comparisons. In 2020, you were better off with a randomly selected top-ten ADP WR/TE vs. a top-ten ADP running back. But taking a stud wide receiver or the unanimous top tight end in the first round isn’t an exclusive Zero-RB move. And as explained, after mid-way through Round 1, the scarcity of decent running backs reveals itself leaving anyone waiting on later rounds to pick up running backs, setting themselves up for trouble.

Given the scarcity of the running back position as illustrated in the cumulative fantasy win percentage graph coupled with the fact that even in a year in which so many top-named running backs were draft day landmines, 2020 did not show enough for me to say Zero-RB was a better strategy vs. the traditional Bell Cow approach. But to be clear, this doesn’t mean I wouldn’t consider Devante Adams, Tyreek Hill, and especially Travis Kelce in the first round of 2021. It just means if I do, I’d be hell-bent on hammering running backs with the next couple picks afterward before this ephemeral pool completely dries up.

But what about later round Zero-RB targets like Antonio Gibson, James Robinson, etc.? If you knew exactly which of these guys would be hits, then sure, that’s a strategy you take after buying yourself a lottery ticket. But remember: Zach Moss, JK Dobbins, Tarik Cohen, AJ Dillon, Mark Ingram, etc., were also Zero-RB targets, and the trend line for later round running backs doesn’t support this being a strategy to count on. In reality, whether you took a Zero-RB approach or not, you probably had the same chance to get any successful late-round dart throw.

Sorry, Zero-RB truthers. There are just too few valuable running backs and so many serviceable receivers in the pool to justify waiting multiple rounds before taking a chance on a running back.