Blowing the Combine Away 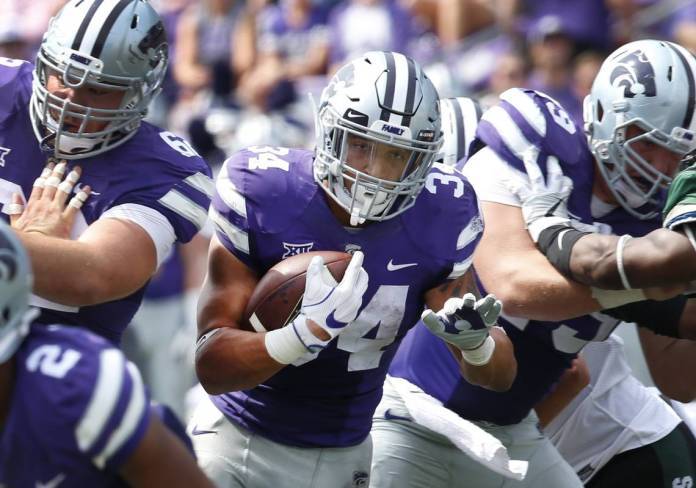 So much chatter over the weekend centered around DK Metcalf’s combine and debate surrounding his hierarchy in this draft class. As fun as this discussion was, it overshadowed some of the other impressive combine performances. As such, I wanted to highlight a couple of RB prospects who really took me by surprise at the combine.

Admittedly, neither of these guys were really on my radar pre-combine, which added to the surprise. For reference Metcalf’s SPARQ came in at 139.7 (99th percentile). Alex Barnes on the other hand had a 145.4 SPARQ (also 99th percentile). The other RB is Ryquell Armstead who came in at a 117.2 SPARQ (68th percentile).

Beginning with Alex Barnes, the former Kansas State RB measured in at 6’0” 226 pounds (already prototypical feature back size). He then proceeded to run a 4.59 40-yard dash, complete 34 bench reps (7 more than Metcalf), had a 38.5 inch vertical, and a 126-inch broad jump. Perhaps the most impressive numbers though are his agility stats. A 6.95 3-cone and a 4.10 20- shuttle are elite numbers.

Barnes had a great breakout season in his final year at Kansas State and he doesn’t have too much wear on his tires. A breakdown of his college stats can be seen below:

With only 458 carries on the body, hopefully the best is yet to come for Barnes. The redshirt Junior was a high-end high school recruit and eventually became the full-time starter as a Sophomore. After Bill Snyder decided to retire, Barnes decided to forego his Senior season and enter the draft.

Prior to the draft, NFL.com’s Lance Zierlein noted, “Barnes is a productive early-entrant with good play strength but average ability to elude and create. On tape, he appears to lack downhill burst and explosive speed to the corner and is more of a “get what’s blocked” back than a dynamic presence with the ball in his hands. His talent as a lead blocker and ability to handle third-down duties should add some value to his draft profile, but RB3 might be his ceiling.”

Although Barnes may not be the entire package in terms of RB mental characteristics such as vision and patience, his athleticism should provide teams with enough intrigue. I still think Barnes will be a day 2 or 3 selection, but if he lands in a spot with little competition then he has every shot to be a high 2nd round rookie draft pick.

Our second RB as mentioned above is Ryquell Armstead. The Temple RB measured in at 5’11” 220 pounds. Again, this is prototypical size with enough athleticism at 220 pounds to be a force. Armstead ran a 4.45 40-yard dash, which was the 2nd fastest time by the RBs. He also crushed out 22 bench reps and had equally impressive agility stats as Barnes. Armstead had a 7.02 3-cone drill and 4.29 20-yard shuttle. His 40-yard speed is 91st percentile, while his speed score is 94th percentile.

The former Temple RB didn’t take over as the starter at Temple until his Junior year. Prior to that, he was sharing time with Jahad Thomas. A breakdown of his college stats can be seen below:

Armstead is a thick, fast and fearless runner who runs with anger. Every rush is full tilt and he blows through tackles lowering his pads. He’s also fairly adept as a pass-blocker. On the contrary, Armstead’s aggressive run style sometimes means that he misses obvious holes and lacks patience behind the O-line.

NFL.com’s Lance Zierlein mentioned that Armstead is a “Face-first runner who doesn’t appear to care that brakes come standard with the vehicle. Armstead’s feet fire like pistons from the beginning of the snap all the way through his physical finishes. While he’s not classically elusive, he does find his own yards by slithering through tight quarters or stacking yards after contact. His size, decisiveness and effort in pass protection should land him work as a backup, but his play traits could help him find more carries than expected as a pro.”

Armstead showed enough in his Senior season to potentially be a late 2nd round rookie pick. I would have liked to see more work in the pass game in college, as he currently just looks like a change of pace or short yardage back.

In the 2nd round of rookie drafts, both these guys possess enough physical traits to be worth a shot. Especially considering the lack of depth at RB in this class.