Hopefully we all made it through the Week 7 Bye-maggedon relatively unscathed. Bye weeks aren’t even close to over yet though, so here are a few players who you can add to get you through these tough weeks. 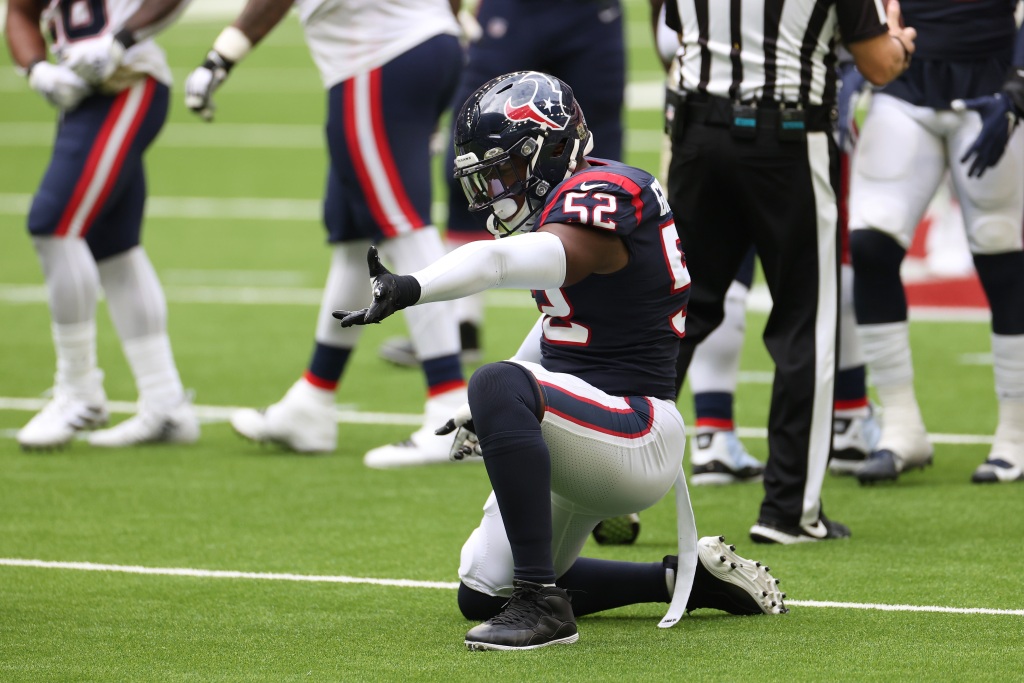 Life came at me fast last week, and we weren’t able to put up an article. That being said, I’ll cover the players mentioned in the Week 6 article, as well as a player I should’ve mentioned last week!

Week 7 – Who I should’ve written about…

After a quiet rookie season in 2020 behind other pass rushers, Greenard wasn’t on many people’s radar as a breakout candidate for 2021. I think most of us knew someone had to fill Watt’s shoes in Houston, and we just weren’t sure who.

Greenard started the season by missing the first two weeks but then came out against Carolina with a solid performance. He suffered a chest injury against the Bills in Week 4 but then came back in Week 5 with another DL2 worthy outing. His snap counts were still a bit low to assume he’d keep up this trend, but then Week 6 came, and he dropped a whopping 30 points (6 TKL, 2 Sacks) against the Colts. Now we might be onto something… but I didn’t want to jump the gun. Then, news came through that Houston was dropping veteran pass rusher Whitney Mercilus. Houston believed in what Greenard was doing and trusted him to fill Mercilus’ shoes.

Throughout the week, I hyped Greenard up to anyone who would listen. That paid off on Sunday with another stellar outing against the Cardinals (28 points, 4 TKL, two more Sacks). That makes six sacks in effectively four weeks of playing.

Hopefully, for Young’s sake and the injury-riddled Broncos LB corps, the “third team is the charm”. Young started his career in Baltimore but found his way to LA in 2019. After two years and a rocky start to 2021, he was traded to the Broncos, who have been decimated at linebacker this season. They’ve lost Josey Jewell, Alexander Johnson, and Micah Kiser (also from the Rams) to injury. Their 2020 third-round pick, Baron Browning, has also been dinged up most of the season. This leaves Justin Strnad (2020, fifth round) as their most veteran inside LB. Hopefully, Young can bring some experience to a very young LB group and some solid/consistent playmaking. I would avoid starting him this week unless you’re desperate, but he might have been dropped after a few dud weeks, so double-check those wires, and stash him if you can.

A 2020 third-round pick, Davis was highly viewed as a potential starter coming out of college. Injuries have kept him from being relevant in fantasy. He might have been someone on your taxi last year but probably didn’t make your team this year after your rookie drafts. Davis started this year on PUP and played in his first game of 2021 in Week 4 but saw the field for less than 50% of defensive snaps. In Week 7, however, the Jets are dealing with several injuries to their defense, much like other teams. This opened the door for Davis to start in Week 7, and he made the most of it. His speed and athleticism allow him to make tackles all over the field. He’s worth adding to your team because I guarantee you have some underperforming DBs you want to bench/drop. I know I do… looking at you, Jamal Adams!!!

If you’re depleted at DB, or you’ve got several players on bye, then Houston-Carson might be worth looking at. He’s starting for the injured Tashaun Gipson, who has a hip injury. Gipson could be sidelined for another week so that Houston-Carson could fill a gap in your starting lineup for a week. He doesn’t have much upside outside of that, though.