This running back class is loaded. @sportsfanaticMB takes you through the running backs to watch as you prepare for rookie drafts. 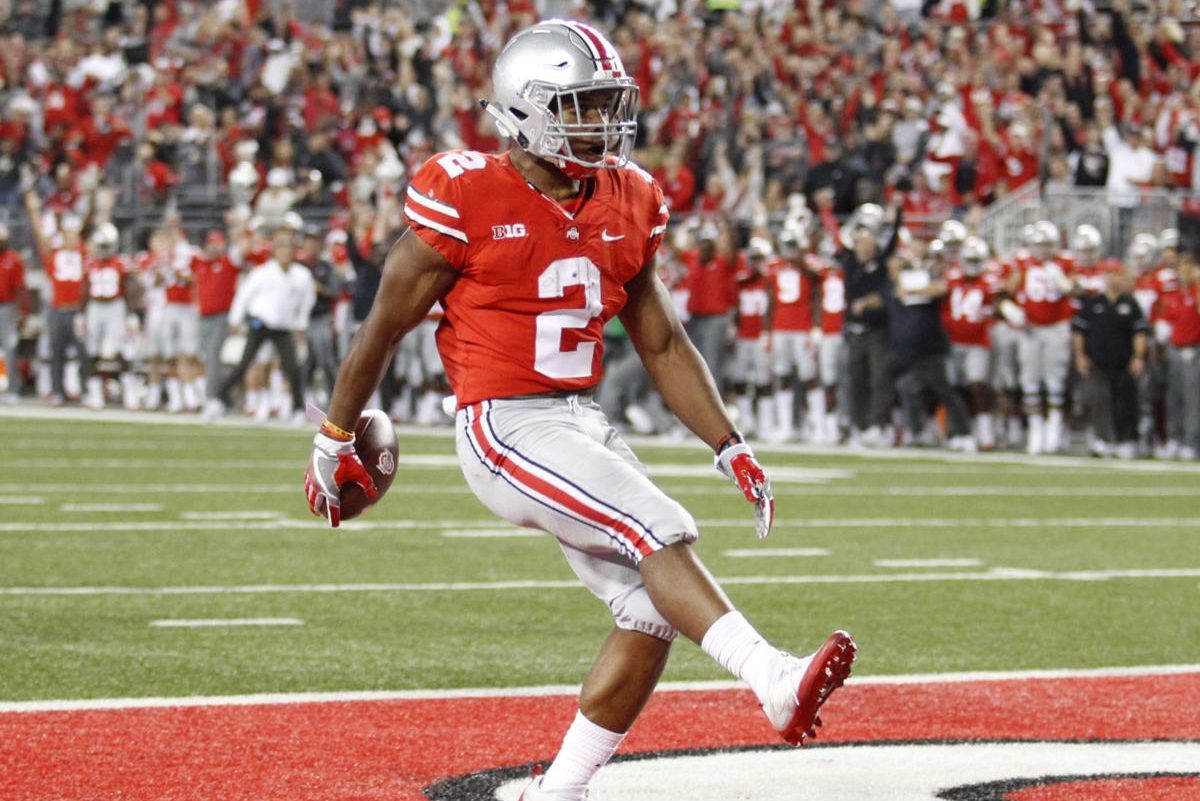 We have finally arrived at one of my favorite times of the year. Fantasy playoffs have wrapped up. It’s the holiday season, spending time with families and loved ones. It’s also Bowl Season.

College football teams go up against each other in 40 bowl games over the next couple of weeks. While the times have changed from the past and some top tier draft-eligible players tend to sit out of some of the more meaningless bowl games.

With this article series, I will be giving you the top of my tier two running backs and all of my tier one running backs, as well as the games they will be playing in. A few of them won’t be in bowl games due to their teams or them choosing to sit out. These are still players I would recommend diving into as well before the off-season as they are running backs to watch as we move closer to declaration day on January 14th. While some of the running backs on this list might go back to school this is still a loaded class. This is the year to rebuild your RB core. Whether you’re still in the playoffs or knocked out, these are the players to watch throughout the bowl season, and the players I would look into leading into the scouting combine. While I will give a short synopsis on each player all stats are provided by https://expandtheboxscore.com/ it has the best college football stats around, check out the end of the article for a discount on their site as well.

Here is a quick breakdown of some of the stats you’ll see below all the stats are from the current 2019 season as well.

Team Scrimmage Yards distribution- the percentage of the entire teams gained scrimmage yards broken down by what each player has done for their team.

Dominator rating- this is based on how big a part a player is of his team’s offense. It’s a ratio of the total number or offensives yards and scores.

Florida State will be playing in the Tony the Tiger Sun Bowl on Tuesday, December 31st, Cam Akers has chosen to sit out of the game and focus on preparing for the NFL Draft.

Akers is a player who has improved his draft stock this season. Akers can be a very physical runner and has a nice blend of size, speed, and power. He has shown good acceleration in tight spaces. A good receiver out of the backfield, Akers seems comfortable catching the ball. He can make defenders look silly in the open field, whether being elusive and avoiding tackles or running them over.

Akers showed improvement in his vision in 2019 but still could improve this at the NFL level. He has really struggled in pass protection, which could limit his play on the NFL level.

In Akers big play % he took 10 plays over 20 yards, five of which resulted in a touchdown.

Harris and Alabama will be playing in the VRBO Citrus Bowl on Wednesday, January 1st.

Harris has had to sit behind multiple running backs in his Alabama career. This being his first year as the unquestioned starter. For such a big back he runs with incredible patience allowing blockers to get in front of him and clear a path instead of running defenders over. Great power runner but has a little elusiveness in him, whether its jump cuts or hurdling defenders. His contact balance and ability to always fall forward for positive yards when being tackled is one of his best traits.

Harris isn’t going to win many races to the endzone and while it won’t be easy can be caught and brought down from behind. We also haven’t seen much from him in the passing game, just 10 catches over his first two seasons. While he did double that number in his final season, he’ll need to show that off to be a true three-down back in the NFL.

In Harris big play % he took 10 plays over 20 yards, two of which resulted in touchdowns.

Edwards-Helaire and LSU will be playing in the Chick-Fil-A Peach Bowl College Football Playoff Semi-Final.

Clyde much like the rest of the LSU offense has jumped his stock astronomically this season. When I say he’s elusive I mean it! Helaire has one of the highest broken/missed tackle rates in the country. He has shown good patience and when he sees the hole, he wants he attacks it with authority. He shows off great power and agility.  Plays smart running the ball and in the receiving game. The variety of routes he has run and sharpness in them you would think he was a wide receiver. He has very reliable hands in the receiving game as well.

The only question I think most will have of Helaire is his experience. He has only had one year as a starter, but has completely dominated in that role. He is close to one of the most complete backs in this class.

In Edward-Helaire big play % he has taken 13 plays for over 20 yards, five of which have resulted in touchdowns.

Hubbard and Oklahoma State will be playing in the Academy Sports + Outdoors Texas Bowl on Friday, December 27th.

Hubbard is one of the more patient runners in this class. Quick feet and can quickly string together a couple of stutter steps to spin moves to get away from defenders. He isn’t afraid to lower his shoulder and take on defenders, active and willing to do work in the receiving game.

Hubbard lacks in pass protection and will be his biggest issue coming into the NFL draft. He also lacks that elite breakaway speed can be brought down from behind.

In Hubbard big play % he took 19 plays for more than 20 yards, eight of which resulted in touchdowns.

Taylor and Wisconsin will be playing in The Rose Bowl presented by Northwestern Mutual on Wednesday, January 1st.

Taylor has an impressive skill set of size, speed, and power. Shows great power on all his runs. He is the best pure runner of this class. Smooth runner and can easily accelerate past defenders and once in the open field, he won’t be caught. Shows tremendous vision is extremely patient and decisive when following blockers.

Taylor’s biggest question is the same as the player ahead of him receiving work. While he’s proven to me, he’s more than good enough in that part of his game, many will have preferred to see more out of his college career in that area. The workload is a bit nerve-racking for me as he already has over 600 carries on his legs. Some will question how talented he is running behind that line as many did with his compatriot Melvin Gordon when he left Wisconsin.

In Taylor big play % he took 12 plays over 20 yards, seven of which resulted in touchdowns.

Etienne and Clemson will be playing in the Playstation Fiesta Bowl in the College Football Playoffs Semi-Final on Saturday, December 28th.

Etienne has true rare and elite speed. He may be the most complete back of this class. He can hit a gear most football players can’t, he has great contact balance even with his speed he isn’t afraid to take it up the middle. Easily breaks arm tackles and can make quick cuts to get free even when surrounded by defenders.

Etienne receiving work was called into question this year, he has answered that question for me. However, some may still be worried about this part of his game. He relies too much on his speed at times causing him to miss holes and leave positive yards on the field.

In Etienne big play % he took 15 plays for more than 20 yards, five of which resulted in touchdowns.

Dobbins and The Ohio State will be playing in Playstation Fiesta Bowl in the College Football Playoffs Semi-Final on Saturday, December 28th.

Dobbins has elite vision and shows in on almost every run. Great instincts as a runner hitting holes or cutback lanes before they are fully open. Almost always picking up yards after contact and displays good contact balance. He has one of the best jump cuts in this draft. Dobbins is not only a smooth runner but he also is very smooth in the receiving game. Whether it’s coming out of the backfield or in the screen game, or even checking down in the flat and running routes. Dobbins is a willing pass blocker.

Dobbins likely biggest mark on his record is that he doesn’t have the elite breakaway speed. He can be brought down from behind. He did show some struggles in pass blocking in his last two games, but overall throughout the season, this wasn’t an issue for him.

In Dobbins big play % he took 19 plays over 20 yards, five of which resulted in touchdowns.

Swift and Georgia will be playing in The Rose Bowl presented by Northwestern Mutual on Wednesday, January 1st.

Swift being called elusive is an understatement. He possesses elite change of direction and short-area quickness. His “dead leg” cut might be one of the nastiest juke-moves I have seen in a while. Disciplined and decisive runner, patiently waits for blocks to develop and holes to open. Has shown good contact balance and good hands in the receiving game.

Swift has limited questions for me. He doesn’t possess elite breakaway speed in my opinion. That is my only knock on Swift. I have seen others who worry about his nagging soft tissue injuries and the fact he hasn’t proven he can be a workhorse. The injury question worries me a bit but not enough to knock him off the one spot in my ranks.

In Swift big play % he took 13 plays for more than 20 yards, two of which resulted in touchdowns.

That is the top of my tier two running backs and my entire tier one of running backs. As Bowl games approach watch these guys and their games. Check back in the offseason as I will do full breakdown articles on these players. Going deeper into the analytics and tape to help you get the best draft day steals. If you want to check out https://expandtheboxscore.com/ use my code “Roundtable” for 10% off. Also, check out my podcast on I-tunes and everywhere you can get podcasts.