It’s not often a buy window opens on a premium player. @JoeBeldnerFFB takes a look at one that just opened. 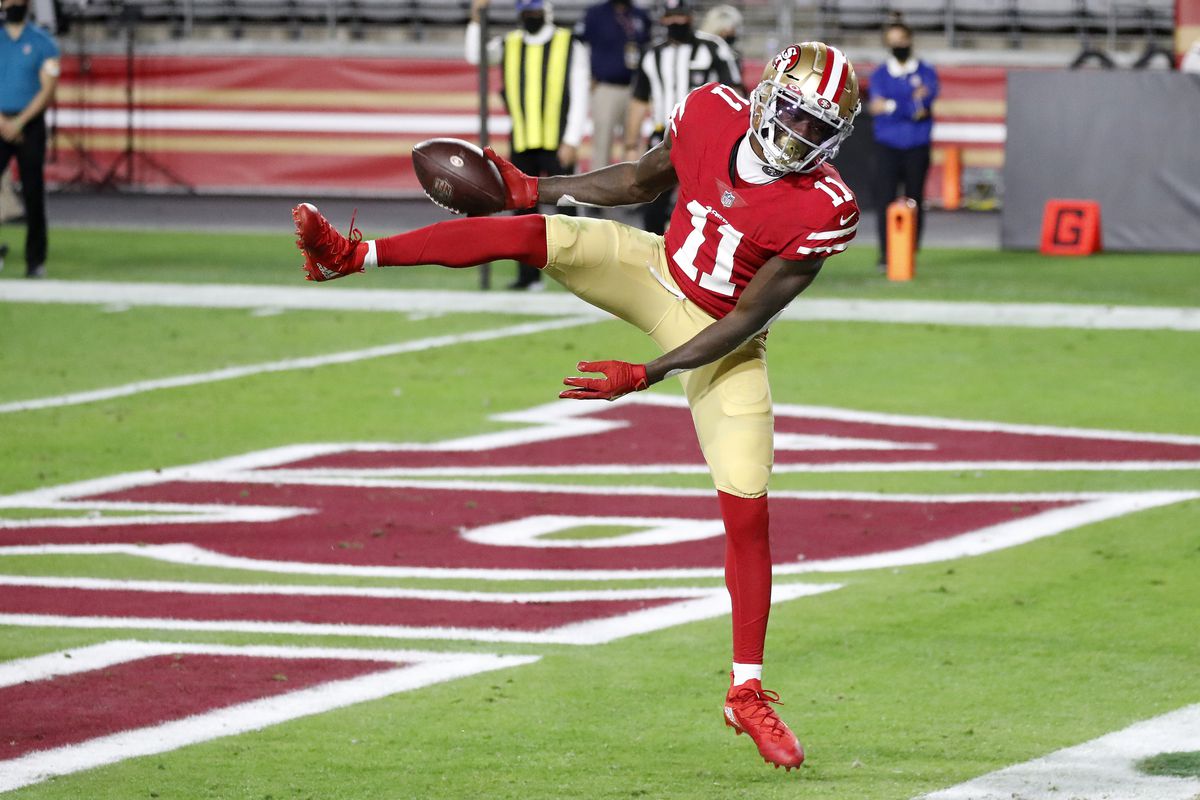 Strong sophomore seasons are often a significant, necessary follow-up statement for young wide receivers to prove that they have what it takes to make it in the NFL. After an eye-opening rookie season with the 49ers, Brandon Aiyuk has given dynasty stakeholders very little to smile about early in his second season. It is not often that a twenty-three-year-old stud WR becomes a buy-low candidate. Right now might be your last shot to trade for Brandon Aiyuk before his buy-low window gets permanently slammed shut.

In his rookie season with the San Francisco 49ers, Aiyuk totaled an impressive 60 receptions for 748 yards and 5 TDs over a 12 game pace. He added 77 rushing yards for 2 TDs on the ground during this period, per Pro Football Reference. The team additionally coveted him enough in last year’s draft to spend the 25th overall selection on him. What has changed since the end of last season regarding the relationship between Aiyuk and the team is nothing short of mind-boggling. Besides dealing with a nagging hamstring injury all preseason, Aiyuk has also caused his coaching staff to question his heart and focus.

There is a lot of “coach talk” in the preseason that should be ignored until the start of the regular season. In his first game of the 2021 season last Sunday, Aiyuk laid a goose egg, earning zero targets. He was only on the field for a minuscule 26 snaps. The hamstring injury most definitely played a part in his low usage. Still, his coaching staff’s statements after the game caused a genuine reason for concern. Head Coach, Kyle Shanahan, stated that “if he wants to be out there every single play, he’s got to be a lot better than the guy behind him”. The guy behind him, who on Sunday played over him, is none other than Trent Sherfield. Sherfield has been in the league for a couple of years but impressed the team enough in the preseason to carve out a significant role in Week 1.

Is Trent Sherfield a better football player than Brandon Aiyuk? Absolutely not. My take on the situation is that Kyle Shanahan is just trying to light a fire inside his young receiver. He tried to do the same with former second-round pick, Dante Pettis but the situation failed miserably. That resulted in Pettis getting cut from the team after work ethic concerns and fumbling issues. History will not repeat itself with Aiyuk. He will inevitably bounce back and reestablish the trust of both his coaching staff and dynasty stakeholders.

Brandon Aiyuk perfectly fits the mold of the gadget player that the 49ers have been seeking to fully open up their playbook. He is an excellent fit playing opposite to Deebo Samuel. Aiyuk opens up the field even more for George Kittle and their running game. Do not doubt the potential of Aiyuk. We should instead identify that it is more probable that we have yet to see him reach his ceiling. He has the speed, hands, and athletic ability to give opposing defensive coordinators migraines for the next decade. Even after the electric Week 1 performance from Deebo Samuel, Aiyuk is still the best and most promising WR on the team and the one you should be targeting for your dynasty teams.

The best part about dynasty fantasy football is that you get to roster a player for as long as you desire. The future looks so bright for Brandon Aiyuk moving forward. He already has an offensive genius at his disposal in head coach Kyle Shanahan. Sooner rather than later he will be paired with rookie phenom Trey Lance Once Lance takes the reins as the starting quarterback for San Francisco, Brandon Aiyuk’s fantasy value will inevitably skyrocket. This could very well be your last opportunity to get one of the most promising, young wide receivers in the league at a discount. Act now or be forced to watch him become a superstar from the sidelines. Left only with the bitter regret of “what if.”

Flexy and I Know It: Start/Sit Week 2
Can James Robinson’s dynasty value be salvaged?