Joe Colonna dives deep into the Steelers’ wide receiver trio – one of the best trios in the league, but also one of the hardest to predict. 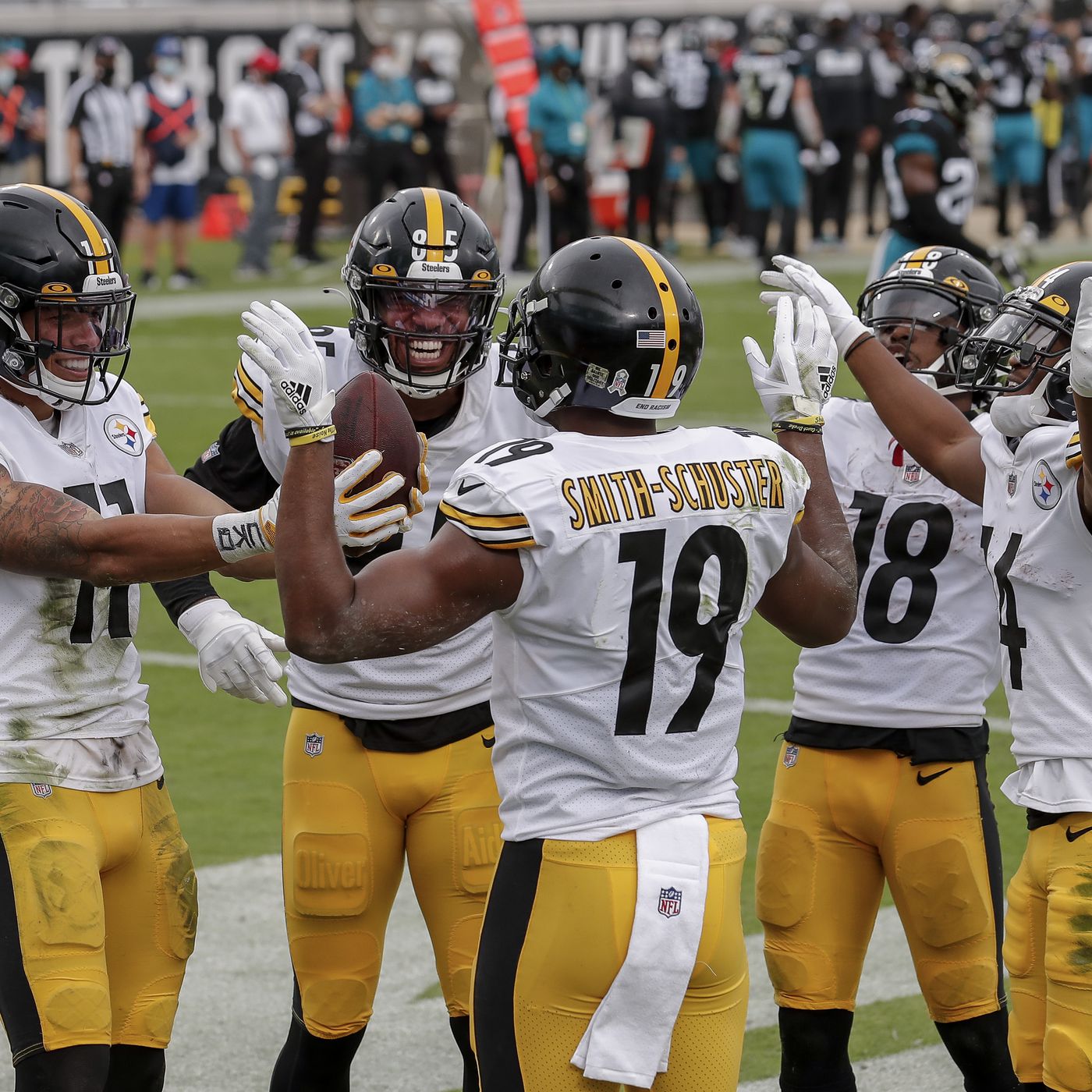 How’s it going everyone, Joe Colonna here. In this article, we are going to try and figure out which Pittsburgh Steelers wide receiver we want to own in our fantasy football leagues: Chase Claypool, Diontae Johnson, or JuJu Smith-Schuster? In this article, we will sort through the data and help make that decision.

First, let’s take a look at the overall pedigree of each receiver. Here’s a quick recap of where each receiver was selected in their draft class.

Now, let’s dive into the college statistics for each player. How did these receivers do in college? Who had the best overall college career?

Overall, Smith-Schuster had the most consistent college career among the three. His breakout season was in 2015 as a sophomore where he had 1,454 receiving yards and 10 touchdowns. He followed up that season with another of double-digit touchdowns, and nearly another 1,000-yard season (914 receiving yards) JuJu also had three seasons of over 50 receptions in college, which is notable.

Okay, now that we have a general idea of how these players performed in the college ranks, let’s see how they’ve done in the NFL to this point.

One thing that stands out is that JuJu owns a 1,000-yard receiving season in both the NFL and in college, which gives him a lead. JuJu also has two seasons over 900 receiving yards, another plus. Yards are not everything when deciding which player to select, though.

Who is being targeted the most? In JuJu’s 2018 season, he had 166 targets, and that was with Antonio Brown still on the team. Since then, Johnson and Claypool arrived in Pittsburgh. Diontae Johnson had a 92-target rookie season and a 144-target sophomore season. JuJu’s 2019 season, a year without Roethlisberger, was a 70-target season, but then jumped back up to 128 targets in 2020. Claypool had 109 targets in his rookie season.

So, what does that mean? JuJu had 128 targets, Johnson had 144 targets, and Claypool had 109 targets. That’s three receivers with 100+ targets in a single season. Can we expect that to continue? I think that seems like a bit of a stretch. Sure, two of these players could see 100+ targets, and maybe another close to 100, but which ones will?

Which player has been the most efficient in the NFL so far? Let’s dive into the statistics below:

Smith-Schuster heads this group by a wide margin, with an 84.10% snap share.

JuJu also leads the way in routes run by a great deal as well, with 629 routes.

Smith-Schuster had a big lead in catch rate compared to the rest of the group here, with a 75.7% catch rate, compared to a 61.1% rate for Johnson and a 56.8% rate from Claypool. My suggestion is, this has a lot to do with experience and a low average depth of target (aDOT) for Smith-Schuster.

Diontae Johnson led the team with a 22.9% target share. This is intriguing.

Chase Claypool led the Steelers in yards per reception and was the primary deep ball option in Pittsburgh last year.

Claypool led the Steelers in Fantasy points per target, on the heels of his 9-touchdown season. JuJu was second, and Johnson was third.

Not only did Smith-Schuster lead in snap rate, catch rate, but he also led in yards after catch (YAC) as well, meaning he had short intermediate passes coming his way, and it was up to him to make the most out of them. It is worth noting, this was a close category, though.

Claypool was head and shoulders above the rest of the group with a 13.2 aDOT. It’s worth noting that Smith-Schuster had the lowest aDOT, but the highest YAC, catch rate, and snap share.

Very close here, all within a few decimals of each other, but Johnson leads by .03 over Claypool in this category.

Diontae Johnson had a notable 7.6% drop rate. Hopefully, he can improve this number and be under 5% in his sophomore campaign. Claypool had 4.6% and Smith-Schuster had no drops.

Claypool had a massive edge over Johnson and Smith-Schuster here, which is interesting. Claypool had the highest average depth of target and highest air yards per reception numbers.

Surprisingly, JuJu Smith-Schuster had the most red-zone targets of this bunch, over Chase Claypool. I would have expected Claypool to be the leader here without looking into it.

As hinted at with the high aDOT, and air yards, Chase Claypool led the way with deep targets as well.

What Does the Data Mean?

Now that we have looked into the data, let’s take a look and figure out how it could help us figure out who to own in the future. Let’s talk about the positives of each receiver. JuJu also has a low average depth of target, which means short and intermediate pass attempts will go his way more often. Smith-Schuster creates a lot of his yardage after the catch. It is great to see with a low aDOT because he won’t be getting a ton of air yards. He also has experience on his side, entering year five of the NFL. Smith-Schuster has the highest snap share rate and the highest catch rate among the trio, which should be the case, given his low aDOT. JuJu has the highest fantasy points per target and the most red-zone targets. Smith-Schuster has a lot going for him now, but let’s see what the others bring to the table.

Johnson is an intriguing player. With a 1,000-yard receiving season in college, a 144-target season in the NFL, and just missing 1,000 receiving yards last season, the production is there. Johnson has the highest target share, most separation, and the second-most snaps on the team. However, the major concern is the drop percentage, which was at 7.6% last year. It remains to be seen if the targets will continue in 2021 for Johnson. If he can keep getting those targets, consistency will be on his side.

Claypool feels like a bit of an enigma. Somehow, in his rookie season, Claypool hauled in 9 receiving touchdowns, most of the trio, had the second-highest fantasy points per target, second-most red-zone targets, highest aDOT, and highest yards per reception, all as a rookie. Keep in mind, if we look at the game-by-game basis, we see that a third of his touchdowns came in one game, and he also had another game with two touchdowns as well. That’s five of nine receiving touchdowns right there in two games. Can we expect that to continue? I’m not so sure. If that does not continue, you have to expect the fantasy points per target to decrease, right? One thing that Claypool does have is massive size, at 6’4 and 238 lbs. Diontae Johnson (5’10, 183 lbs) and JuJu Smith-Schuster (6’1, 215 lbs) don’t even compare in that regard.

So, the last thing we should look at before concluding here is the health of the players. Smith-Schuster played in all 16 games in 2020, but missed four games in 2019, and missed part of three games in 2018. Diontae Johnson only missed one game last year, though he did have a sports-hernia surgery early in the off-season. Chase Claypool did not miss a game in his rookie season. Claypool and JuJu have health on their side.

It is also worth noting that Smith-Schuster is in a contract year, whereas the others are under contract for at least another year plus.

By the way, let’s quickly compare the age of each player

Claypool: About to turn 23 in early July.

Johnson: About to turn 25 in early July.

Now that we have looked at all of the data in front of us, it’s time to make a call. Which Steelers WR do we want to own? For me personally, I’m going to go with Smith-Schuster. I feel like people are not recognizing the incredible ability he has. People want the shiny new toys on their team, but JuJu is still 25 years old, entering a contract year, and has so much going for him. He’s got so many stats leanings his direction, plus a contract year, it’s easy to go in his direction. I’d expect low-end number two fantasy receiving numbers, with upside for more.

Now, the next part. Honestly, both players have a lot going for them. Do you want massive targets and consistency, or the upside? If you want consistency, go Johnson. I think as of now that’s the direction I’m leaning because targets are more predictable than touchdowns. Johnson has tons of targets coming his way, gets great separation, has a good report with Roethlisberger, and plays a ton of snaps. Claypool brings so much upside to the table with his massive size, yards per reception, air yards, touchdown upside, red-zone usage, and high aDOT.

Me personally? I like to play it safe. I’ll rank them Smith-Schuster, Johnson, and then Claypool, in that order. I understand the appeal of all three, and Claypool is very close to Johnson in my opinion, but JuJu is the top choice.

Thank you for taking the time to read this article. I hope this provided some insight into which player to target on your fantasy squad this season. If you have any questions, feel free to reach out to me on Twitter, @JoeyColonna. Thank you again, everyone!

Thank you for reading this article! Please be sure to join the #Nerdherd so you don’t miss out on any of the amazing things we have to offer Dynastynerds.com. You will get rankings, extra podcasts, and access to our rookie film room. For just a couple of bucks more you can get access to our revolutionary DynastyGM tool. So much for so little, why miss out on all the fun.