Which defensive linemen can give you the BOOM after round 20, in a 12-team league, can produce a top 20 finish? 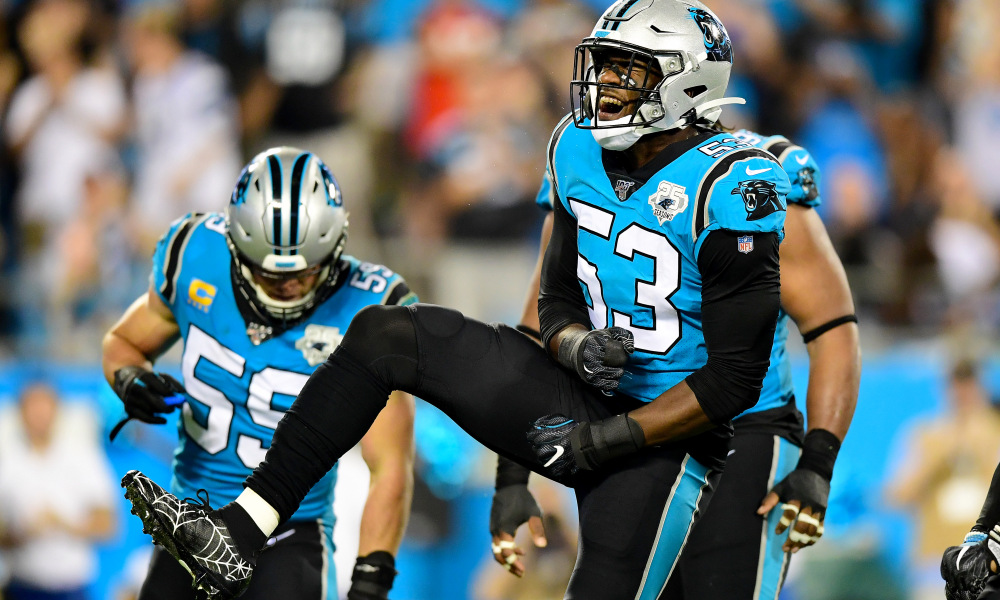 We are fast approaching the beginning of the 2020 NFL season, and I’m sure we all have been in plenty of drafts, both redraft, and dynasty startups. We all are looking for which players can help us in the later rounds of the draft. After round 20, in a 12-team league, which defensive linemen can break out and produce a top 20 finish?

When the Carolina Panthers selected Brian Burns with the 16th overall pick in the 2019 NFL Draft, he was supposed to make a significant impact on the Panthers defensive line. However, that didn’t go as planned. Ron Rivera switched the base defense from the 4-3 they had been playing for years, into a 3-4. As a result, the run defense was one of the worst ever it has seen. The pass defense improved, but the others took a significant hit. New defensive coordinator, Phil Snow, said they would play multiple fronts, but 4-3 will be the base. It sounds like Burns will be playing more defensive end than an outside linebacker, which should improve his gameplay from 2019.

Burns is going as DL36, per IDPguys.org, behind players such as Jadeveon Clowney, Akiem Hicks, and Stephon Tuitt. If he can get more playing time, Burns could break out with a jump in production. The Panthers signed former Viking Stephen Weatherly and drafted Penn St. standout Yetur Gross-Matos in the second round of the 2020 NFL Draft to help their defense. There is nowhere but up for Burns to go, and you can get him late in drafts right now. Snag him while you still can!

Chase Winovich‘s importance to this team keeps growing more and more as each week passes. This off-season the Patriots defense took a huge hit losing linebackers Jamie Collins and Kyle Van Noy, and defensive lineman Danny Shelton via free agency. Dont’a Hightower then opted out of the 2020 season due to COVID. Winovich will play at both linebacker and defensive end, which makes him a bit more versatile in fantasy leagues.

In 2019, Winovich played in only 28.7% of the defensive snaps, leaving him no choice but to rack up more playing time in 2020. Collins and Van Noy both played over 80% of the defensive snaps, and Hightower played 71%. Rookies Josh Uche and Anfernee Jennings should take over some of those snaps. Even fellow rookie Kyle Duggar could see more time in the box, giving the Patriots a load of young weapons on defense.

Winovich is going right now as DL37 right behind the aforementioned Brian Burns. When the 2020 seasons ends, he could be in the top 20 with the increased playing time and a steal in dynasty leagues.

Some could say that Ifeadi Odenigbo had his breakout season in 2019, racking up seven sacks playing behind Danielle Hunter and Everson Griffen. However, the departure of Griffen and Weatherly leaves a wide-open spot for Odenigbo to take over the opposite of one of the best defensive ends in the game.

Last year Odenigbo played only 33.5% of the snaps, while his counterparts Hunter (80.9%), Griffen (77.8%), Weatherly (38.2%) played significantly more snaps during the season. Odenigbo could see a massive bump in all his stats with snap counts around 70%, which could easily hit the double-digit sack total. The Vikings defense lost a lot in the secondary as well, which could lead to more pass-rushing opportunities for the defense.

Currently, Odenigbo is going around DL30, behind players such as Melvin Ingram, Dante Fowler, Clowney, and Carlos Dunlap. In dynasty leagues, I would probably take Odenigbo over all of them, especially playing the opposite of Hunter. Imagine what he could do with twice as many snaps as he got in 2019.

Thanks for reading and I hope you enjoyed the article. You can find me on Twitter @ejh1528. Feel free to shoot me any IDP (NFL or Devy) questions you may have. You can also check out the IDP Devy Podcast, which I co-host under the @DevyIDPGrind podcast. You can see my previous Dynasty Nerds article here and my Devy IDP articles at IDPGuys.org. Are you a #NerdHerd member yet? For just $2.99/month, you get access to rankings, extra podcasts, the buy/sell tool, and more on the way.

🆕 Mock Draft 3.0 round two coming at you live!! Did your favorite sleeper make it into the second round. Read up and see!!
https://www.dynastynerds.com/2021-superflex-mock-draft-3-0-round-2/

.@DynastyPrice and I will be at the @seniorbowl next week. First timers! Can't wait.

@DynastyNerds Building a dynasty WR warchest. Do you think this order is right based on Dominator app value?