Gage Bridgford (@GbridgfordNFL) breaks down one of the most accomplished wide receivers in the 2020 draft class in the form of Bryan Edwards out of South Carolina. 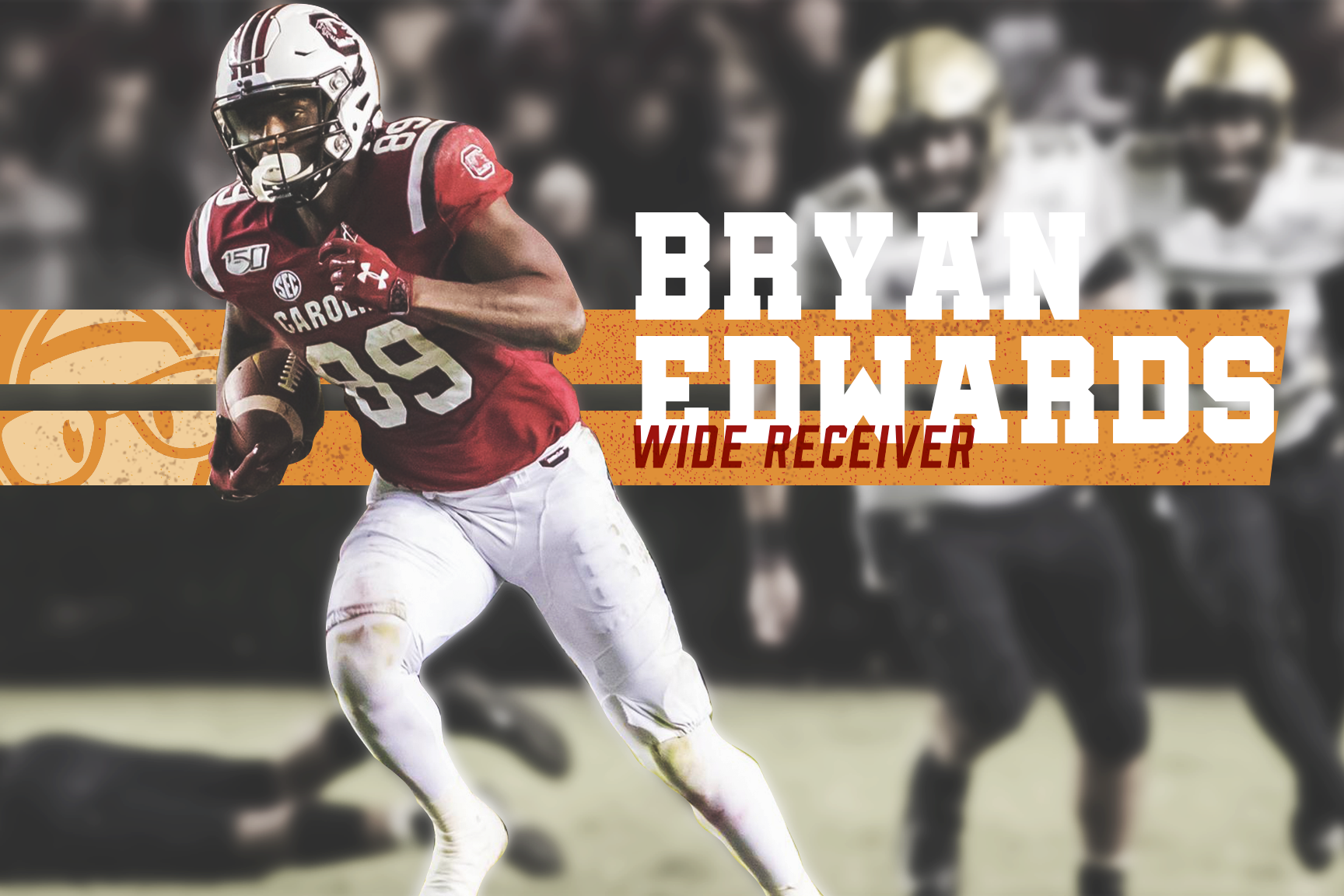 Bryan Edwards is a senior wide receiver coming out of the University of South Carolina. Edwards has consistently developed during his four years in school, and he’s leaving with his name all over their record books. He’s at the top of their leaderboards for receptions and receiving yards, and he’s third in receiving touchdowns with 22 which is just one behind all-time leaders Alshon Jeffery and Sidney Rice, who developed into pretty decent pro players.

In his four years at school, his role with the team consistently developed, and it culminated with being the team’s best offensive player by a mile. He was a team captain, along with winning the MVP award for the team and the offense. He was voted to second-team All-SEC by the coaches of the conference. One of the more impressive feats from his four-year career was obtaining the school record for consecutive games with a reception with 48. He played in 48.

Edwards is the type of player that’s going to interview extremely well during the pre-draft process, and he’s going to sway teams in his favor as a result. His ability to test well athletically is going to be the biggest determining factor in where he gets drafted. If he’s able to display good explosiveness and agility, he instantly becomes a day-two prospect rather than a day-three prospect.

In 48 games at South Carolina, Edwards developed his consistency, and he learned how to use his size to his advantage. He scored at least four touchdowns in every season, and he grew his consistency and explosiveness during his college career. Outside of one game during his senior season with just seven yards, he had at least 15 yards in every game. His consistency is just not something that you see in college football that often.

That whole consistency thing I was talking about goes even deeper when you look at his game log from that senior season. He recorded at least six receptions in each of his final eight games, and he got into the end zone four times during that stretch as well. This is a player that’s going to give you consistent production every single week that he’s on the field.

Outside of his final two games as a senior and one game as a freshman, he played in every game possible during his four years. It will be interesting to see what teams think about his knee moving forwards after it caused him to miss the last half of his senior season of high school along with the end of his college career. The final one wasn’t serious, but teams have moved players down their board for smaller injury risks.

While players like Alabama’s Henry Ruggs win with supreme athleticism, Edwards wins using his football intelligence and awareness. In the clip below, he recognizes the off-coverage along with the situation. He knows where he has to get for the team to get the first down. He gets to that spot and makes the catch for his quarterback, who was a true freshman that made play difficult on him throughout the season due to his inexperience.

As the NFL has gone more wide open, we’ve seen a lot of teams focus on throwing the ball to their outside receivers as they get down the field. Edwards can win outside, but he’s also great doing damage in the middle of the field. He’s not afraid to go in there, and, with his size, he can deal with the hits that he’s going to take in that area of the field.

More teams are incorporating “eye-candy,” receivers on sweeps and end around motions to distract defenses, into their offensive game plans, and Edwards was well-schemed in those types of plays for a few reasons. Edwards was used in that way because of his importance to the offense combined with defenses keying in on him.

In Edwards’ final season, he was playing with a Freshman quarterback that had a number off-target throws, but he always showed his ability to adjust and make help his young quarterback out. With the number of young quarterbacks, 12 players that started at least six games were in their first or second season in the NFL, you need guys like Edwards that can help them have a consistent target on the outside.

Edwards’ explosiveness and athleticism testing are going to be a major factor in how high he gets drafted. When you watch the film, he doesn’t pop with a ton of agility or big-play ability, but he gives you a consistent player every down. Whatever team drafts him will know what they’re getting, but he also doesn’t present a high ceiling. For a team that is looking for a safe option at the wide receiver position, they won’t be much safer than him.