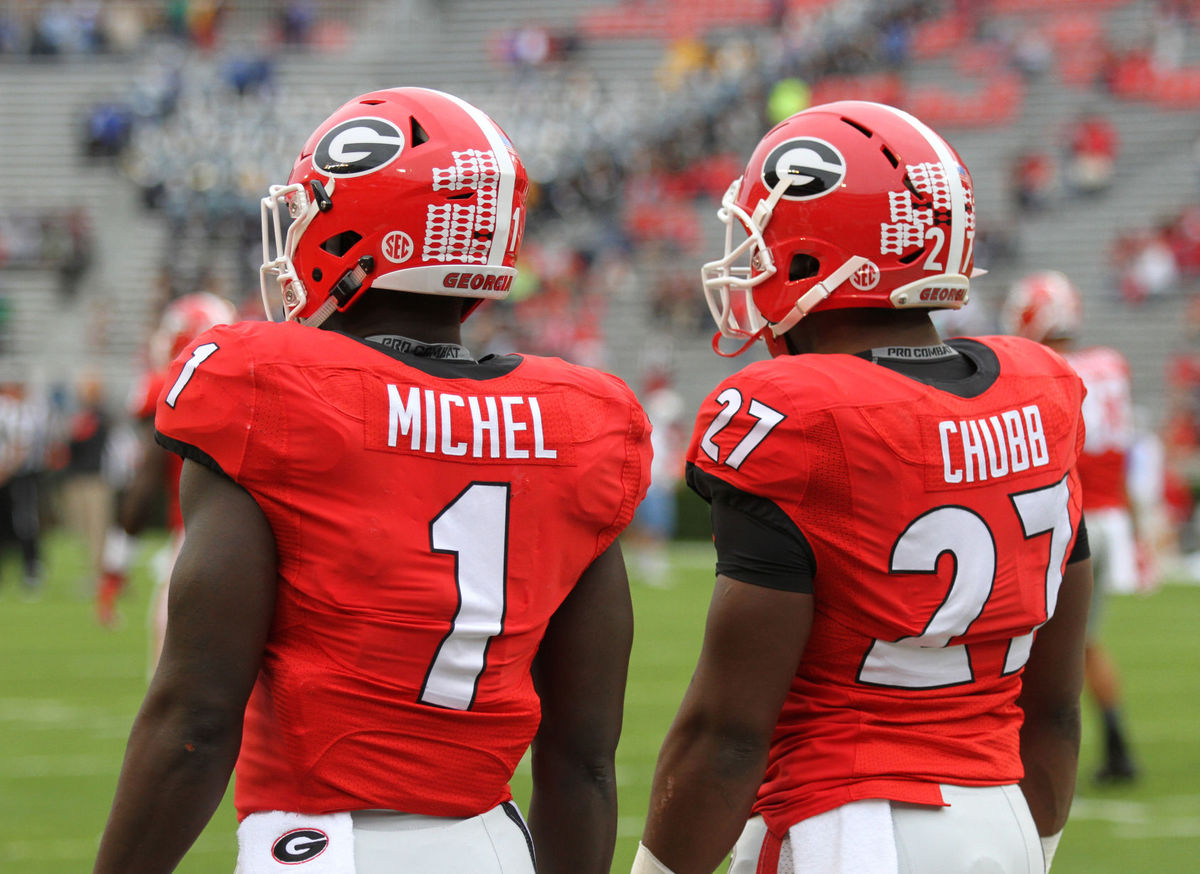 The University of Georgia, home of Bulldogs has their first crack at the college football playoff title after an impressive SEC championship game victory led by their two lead dogs Nick Chubb and Sony Michel. Undoubtedly the best 1-2 punch in all of FBS and will likely be the reason they either win or lose a national championship this season. The real question is how does this tie into dynasty fantasy football and which one is better. I will break down their style of play, touch on their career numbers but mainly focus on this season due to their success despite playing with a freshman quarterback. It’s also the fact that the SEC is just putting out stud running backs to the NFL because of the talent they face every week on the defensive line. Alvin Kamara and Leonard Fornette are the recent studs just to name a few and don’t forget 2018 NFL MVP Todd Gurley came out of Georgia. I’m not saying Chubb will be Leonard Fornette but don’t be surprised if Sony is as good as Alvin Kamara. After canvassing the dynasty community my consensus ADP for Nick Chubb is typically upper to middle of the 1st while Michel is ranked typically somewhere in the 2nd round. I’ve seen anywhere from 2.01 – 2.12 so that goes to show people are still asleep when it comes to Michel.

For years I have been a Chubb guy. Since he was a freshman I loved what he brought to the table. Listed at 5’10, 225lbs, he is not a massive back, but his physicality and toughness show on the field week in and week out. In 2017 he rushed 1175 yards, on 191 carries and 13 touchdowns. He has exceptional vision inside, one cut type runner who really throws his body around breaking tackles and has the ability to make guys miss. He has the size of a feature back but he lacks the shiftiness people love to see when looking at running backs with big-play ability. He only has 30 career catches at Georgia and only 12 after the 2014 season mostly due to Sony taking over the pass-catching role. He was primarily a first, second down guy and likely will be the same at the NFL level with the potential to be a three-down back.

His counterpart, the lightning to Chubb’s thunder is Sony Michel. Listed at 5’10, 215lbs he is the perfect complementary back to Chubb. He rushed for 948 yards on 131 carries for 13 touchdowns to go with 60 career receptions averaging nearly 10 yards per reception. Michel is elusive, has great balance and nearly impossible to take down in open space. Has a power/speed combo that will really translate to the NFL level that you don’t see every day. You may ask well then why was he a backup if he is the perfect player, don’t ask me, ask Kirby Smart. He’s the dummy giving Chubb all the carries. Michel has a strong lower body to break arm tackles, the vision to see the play develop and can really explode for that big play on the ground or through the air. His one issue is he’s not the best interior runner, not as good as Chubb, but he’s physical, has a nose for the end zone on the goal line, and can make people miss with the best of them.

When looking at the statistical breakdown of the two players it is clear both guys are LEGIT and are worthy of being day 1 or 2 draft picks in the NFL. I ran an analysis of each game showing the rushing stats of each player from this past season (because neither caught many passes this season) and categorized the games by whether or not they faced a top 50 defense according to the NCAA rankings. The purpose of doing this is to determine if either guy really beats up on bad opponents inflating their statistics, or if they are truly a special talent that dominates against any opponent.

It is clear that Sony Michel was much more successful period against the same competition on a per carry basis beating out Chubb by more than 1 yard per carry whether it was a game against a top 50 defense or not.

Sony Michel is this years Alvin Kamara and you better believe it. Michel is very undervalued at the second round for a running back that can catch passes out of the backfield effectively like he showed in his sophomore and junior season, can lineup outside and pass block. Michel has all the tools to be a three-down back despite not having the workload and supplanting Chubb. One other big factor is mileage, Michel has only 566 carries to Chubb’s 726 which should be more considering Chubb missed time after he tore his ACL in his sophomore season. Considering both are seniors entering the NFL you are buying them essentially at the beginning of there prime come draft day and all those added carries and hits along with an ACL surgery could be the difference maker for some people, not that it should be its something to keep in mind. One AFC scout seems to agree with me:

“I’m Team Sony all the way. He will have a better pro career than college career because he has a pro game to him. I bet he goes second (round).” — AFC area scout on Georgia RB Sony Michel

I’m not the only one who sees how his game will translate to the NFL in a big way and dynasty owners need to take notice before it’s too late. Michel is going to be a riser the closer it comes to NFL draft season and should easily be taken in the first round of every dynasty rookie draft. Michel is my 3rd running back overall and I would say he is easily better then Chubb. In almost every dynasty league I am in I own Alvin Kamara cause of his ability to catch the football and make people miss in the open field. His one knock was his ability to run inside, and now look at him. The guy is a top 20 pick in startups #3 running back overall. I’m not saying Chubb is a bad running back but you can’t mistake the fact that these are two very talented running backs who happened to be on the same team. Alvin Kamara was a backup in college and produced now he’s doing it in the pros and Sony Michel will do the exact same thing next year. He may not be RB3, but his talent is unbelievable and he has that big play ability and explosiveness that will go a long way. People need to think of him before they think of Chubb cause he could easily be the best running back out of this 2018 class. Don’t make the mistake of taking the wrong guy too high. Take Sony later in rookie drafts and leave Chubb for all those Derrick Henry owners.

The Once Prodigal Kalen Ballage
Scouting Report – Chase Edmonds: The Next Dion Lewis?