Does Jerry Jeudy make the leap in his second year? Does Drew Lock hold him back? @ChrisSmithUSN takes a closer look. 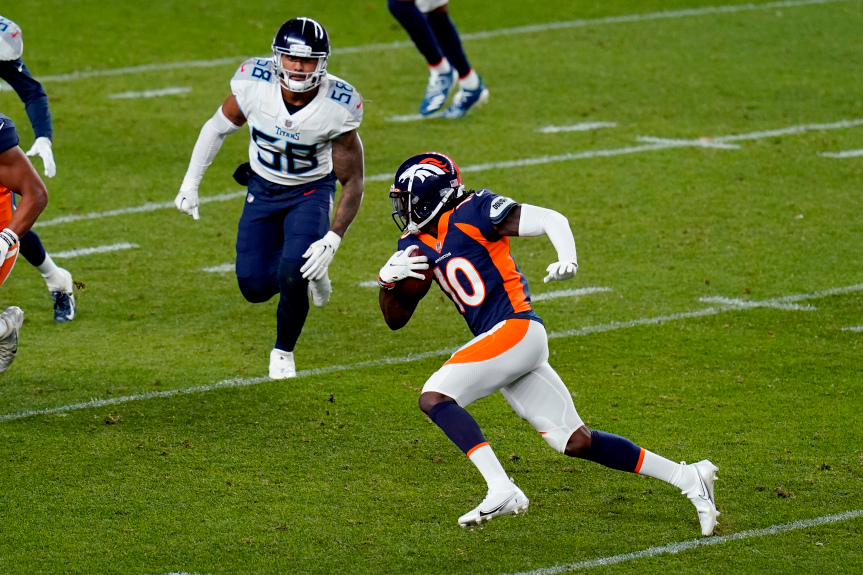 As we approach the 2021 NFL Season, if you’re like me and have already held your rookie draft, you’re probably looking for any little move you can make to improve your team for this season and the future. Instead of several little moves, I’d like to offer a big. A buy-low option that may not be low by traditional standards but is the lowest you’ll likely ever find this player’s value. Broncos Wide Receiver Jerry Jeudy.

Mixed reviews as a rookie

After a dominant college career at the University of Alabama, the former Biletnikoff award winner was drafted 15th overall to the Denver Broncos. Expectations were high as Jeudy was expected to pair with Courtland Sutton and fellow rookie K.J. Hamler to form an explosive receiving core for an exciting young QB in Drew Lock.

The wheels seemed to fall off from that point on as Sutton would go on to tear his ACL Week 1, Jeudy would drop ten passes, Lock would struggle mightily, and the offense as a whole would sink to among the league’s worst. Jeudy would finish with 52 catches for 856 yards and 3 touchdowns, good for 45th among wide receivers in PPR.

Historically, if you look at rookie pass-catchers, his production was pretty good. If you look at the context of the season I laid about above, it’s really good. In 2020 however, we had the historic season of Justin Jefferson. There were also great seasons by Ceedee Lamb and Tee Higgins. It’s easy to see why people are disappointed in Jeudy’s rookie season, as many (including me) believe he was the best prospect of the bunch. It’s easy to see why his value would be so low. It won’t be that for long.

There are a plethora of reasons related to last year’s circumstances why we should expect a big jump from Jeudy. For starters, there’s no way he ends up with the second most unrealized air yards in the league again next year, with over 900 (via player profiler). All of those types of circumstances tend to vary year to year, and it’s likely to change in his favor in 2021, but let’s talk about something a bit more reliable to predict: The Sophomore Jump.

I studied all relevant and healthy first-round wide receivers drafted since 2014. Those players increased their production by an average of 13 catches and 204 yards (touchdowns proved to be almost random). It’s also worth noting that, although those numbers are averages, every one of these players increased receiving yards, and all but two caught more passes. Applying that average to Jeudy would give him a total of 65 catches for 1060 yards and 3 touchdowns. Good for 25th in fantasy points among wide receivers in PPR format.

Wanting to get more specific, I wanted to look at every wide that graded similarly to Jeudy since I began scouting in 2006. I graded Jeudy as the best route runner I’ve ever scouted and in the highest possible tier. Here are the other wide receivers that graded similarly:

That’s an elite group. As you may have expected, that group experienced an even greater statistical jump from year one to year two. On average, players in this group caught 20 more passes for 284 yards and 1 touchdown. Applying that to Jeudy, he projects for 72 catches for 1140 yards and 4 touchdowns. Good enough to finish as WR25 in PPR format last season.

Also, in addition to the note at the beginning about unrealized air yards, it’s important to address Jeudy’s drops from last season. Of his ten drops (good for third in the NFL), six came in one game. I’ll never try to convince you Jeudy won’t always drop a few easy passes a year (he had some drops in college, too), but I believe six in one game is an aberration. He’s much more likely to drop around five passes per season going forward.

History and Jeudy’s ability are on his side. Sutton is back to take pressure off of the defense. It’s only poor QB play that’s holding him back now… or is it?

A “Lock” to improve?

Broncos quarterback Drew Lock came into the season with sky-high expectations and turned in one of the worst seasons in the league last year. After scouting him heavily in college and watching him over the last two seasons, I can see many reasons to be excited about Lock in 2021.

There is every reason to believe that Lock will at least play at the level of an average NFL starter in 2021, but it doesn’t. It’s also worth noting that offseason addition Teddy Bridgewater has been making it a point to target Jeudy in OTAs.

Whether Lock or Bridgewater is starting, one thing is for sure; his QB should be significantly better than last year. Go buy Jeudy now, even if you have to overpay because he will never be this cheap again.