Buy or Bye: Diontae vs Claypool

Diontae vs Claypool: Should you buy the hype or say goodbye to the talent? @FFEvanlution discusses which Steeler you want on your dynasty roster. 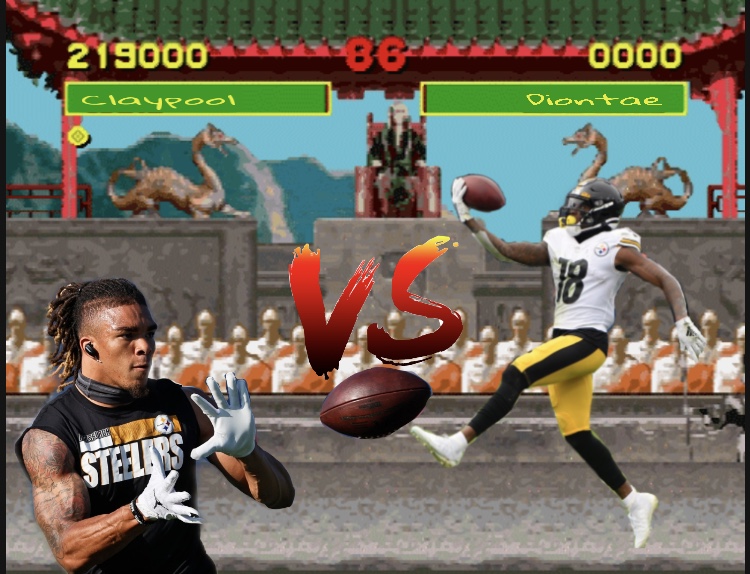 It’s been a minute since I have revisited this series, and I must admit I am excited to be back! The 2021 season is right around the corner. In many leagues, the trade market is FINALLY, ever-so-slowly, creaking open, like the battered gates of a medieval castle finally surrendering after a bitter siege. The exhausted and now triumphant soldiers of a long and barren offseason are preparing to plunder the war chests of the casual dynasty owner, finally returning to the forgotten trades lying dormant in their inbox.

To celebrate this momentous occasion, I thought I would dive headfirst into one of the more passionately contested debates heading into the year. The curious case of the Studly Steelers, as I like to call it. (I apologize in advance to whichever contingent I am about to estrange forever.) It’s an AFC North special featuring Diontae Johnson vs. Chase (Mapletron) Claypool in a teammate battle royale!!!

As always, I will go through a list of criteria and try to be as subjective as I can while giving you the facts I am working with. Then at the end, we will tally up the scores and discuss conclusions.

May the best man win!

Round I: Athletic Profile & Age

As you can tell, Claypool is the bigger, faster, and far more athletic of the two. To be honest, he is somewhat of an athletic freak, even amongst the NFL brotherhood of freak athletes. He ran a 4.42 40 at the 2020 combine and added a 40.5″ vertical to his athletic resume.

Interesting fact, Mapletron is currently the heaviest wide receiver in the NFL at 238 lbs. which makes his athleticism all the more stunning and impactful on the field. Claypool also received slightly better draft capital (2nd round instead of 3rd) and is slightly younger. Both players had very similar College Dominator ratings, with Diontae having a slight edge in breakout age or BOA.

I would say for this round, it is pretty clearly Claypool.

Round I: Claypool Wins

Looking at my two favorite trade calculators (The DynastyGM from Dynasty Nerds and the Dynasty Trade Calculator), you can see that their current value is very, very close. The DTC has them dead even in a 12 team Superflex-TE Premium league. The DynastyGM gives an ever so slight nod to Claypool in price/value, and both sites equate the players to roughly a 2022 1st in value.

Let’s try to split hairs. I will look at the current dynasty ADP according to Sleeper, the largest dynasty platform and my personal favorite.

As you can see, even in a startup, they are very, very close in current value. Since I HAVE to declare a winner, I will give the smallest of victories to Diontae here since he is a couple of picks behind and a couple of points less valuable, according to Sleeper and the DynastyGM.

Diontae had surgery after his 2019 rookie season to fix a sports hernia, then hurt his calf in training camp before last season even began. DJ suffered a few niggly injuries throughout the year and left the game early a couple of times. He only missed one full week (game Week 6) in 2020 and has no long-term injury concerns at the moment.

Claypool did not miss any time due to injury during his rookie campaign. He hasn’t had any injury history to speak of outside of a sprained AC joint in college that caused him to miss a bowl game. It seems that part of being an athletic freak is a lack of nagging injuries. Who knew?!

I don’t think Diontae is “injury-prone,” and I don’t have major concerns over his durability. Football is a violent sport, and almost every player misses some time eventually. I will have to give the nod to Claypool in this category, though, since he has a sterling record regarding injuries.

This is where it gets really interesting. This is where we “separate the men from the boys,” as they say. Bottom line, what does each of these guys produce on the field?

According to PFF, Johnson was 5th in the league for targets, tied 13th for receptions, and received an overall PFF grade of 69.4 (NOICE)

DJ is known as a great route runner who can create fantastic separation. As a rookie, he averaged 3.6 yards of separation on his targets, and this led the entire NFL according to Next Gen Stats. Last season, the number dipped to 3.2, which brought him down to WR36. Playing through some injuries may have impacted this, but we know the ability is certainly there.

Looking at Playerprofiler.com, we can see that Diontae did have the most drops in the league last year at 11 (yikes), but on the flip side, he did have an 88.1% true catch rate and only three drops as a rookie in 2019, so this is more than likely a one-off. On a more positive note, he was on the field for 71.9% of his team’s offensive plays and received 22.9% of Big Ben’sBen’s targets last year.

Even with the drops, the early exits, and missing game Week 6, Diontae still finished 2020 as the WR21 in PPR leagues. If you took away the three games he left early or missed through injury. He would have been averaging around 16.9 ppg. This would have put him as a low-end WR1! I’m not suggesting we take away games not played etc., but I am trying to give you a little context for how good he was last year overall.

According to PFF, Chase was 28th for targets, 35th for receptions, and had an overall grade of 75.6. Interestingly, even with the lower targets and receptions, Claypool was tied for 8th in receiving TDs for a WR.

On Playerprofiler.com, we see that Claypool was 9th in the league for Air Yards and 3rd in the league for Deep Targets with 31. Chase was on the field less (62.5%) and received a lower target share (16.7%) than DJ. Interestingly, both of these numbers are slightly lower than Diontae’sDiontae’s rookie season.

Mapletron was a highly volatile fantasy asset in 2020. He failed to score 10 PPR points in seven of his sixteen fantasy-relevant games last year. Touchdowns and deep targets provided a significant portion of his production. Chase is not an overly refined route runner yet. Instead, he leans on his imposing physique and incredible physical tools to get the job done.

As a rookie, Chase Claypool finished as the WR23 in PPR leagues. This is certainly not a bad finish and is very impressive for a rookie!

I’m giving this round to Diontae because of the higher finish even with injuries and how he got to that finish which I believe is more sustainable.

Both of these young guns have an aging Big Ben slinging them the rock this year and then a question mark over QB going into next season. The Steelers have added Najee Harris via the NFL draft to hopefully give them more potency in their run attack, and the defense is looking very solid again this year. First-year OC Matt Canada should have an impact as well. In theory, he will look to spice up the offense overall, which had become one of the more predictable in the entire NFL.

I believe that Johnson will be the more productive WR between the two again this year. As alluded to previously in this article, if Diontae hadn’t been banged up last year, he would have been on pace to be a low-end WR1 even with the drops. His ability to separate against man coverage, target share, and YAC (Yards After Catch) make him a very desirable addition to your dynasty squad.

I am a very firm believer that the best receivers demand the most targets. In the last five seasons, the top 5 WR’s have averaged 157.16 targets per year. In a ½ PPR setting, this number only drops to 156.64. As a reminder, Diontae had 144 targets in basically 14 games! That would have put him on pace for around 170+ targets for a full 17-game season last year!

Diontae far outpaced any other receiver in Pittsburgh last year for targets. This includes JuJu, who had a previous rapport with Big Ben. His injury history is a slight concern, but not enough to severely downgrade him. With the new look Matt Canada offense in place and a full pre-season, I would predict that Diontae has a breakout year and solidifies himself as the WR1 in Pittsburgh.

Claypool will take another step in year two and be a valuable fantasy asset on your dynasty rosters. His elite athletic profile and a pass-happy QB should equal some really big splash weeks. I think there will continue to be a greater week-to-week variance with Chase than you would probably want.

His WR23 ranking was massively boosted by his 11 total TD’s (9 receiving), which is not something you can count on yearly. In the last five seasons, a top 5 WR averaged 10.12 TD’s in PPR or 9.88 in ½ PPR. Historically, Claypool’s TD’s should have put him near the top 5, not in the low-end WR2 range. All this means is that he was hyper-efficient, historically speaking, for the volume of targets he received. That is not a bad thing, but also not likely to be sustainable long term.

Hopefully, Canada can continue to create interesting and innovative ways to get him involved in the offense. He is an absolute stud, and there are no two ways about it.

One thing I dislike about these articles is that people think I am saying I HATE the other player. The truth is, I like both players quite a lot. I just think decisions like this can be difficult, and it is worth diving in and having a good look at different factors when deciding on who to roster on your dynasty squads.

If you are adamant that Claypool is the best option for your dynasty team, I can understand that. I see a lot of great things about him that are easy to like. There is definitely a world where Chase is the better play. For my money, I am siding with Diontae. I have outlined most of the logic (such as it is) for my decision in this article.

I hope you found this helpful, useful and maybe even semi-entertaining.

If you wanna chat about anything I have covered or just fantasy football, hit me up on Twitter @FFEvanltution.

Check out the DynastyGM for just $4.99/month. We just added the Trade Browser so you can see real trades are happening with players you want to trade for or away.