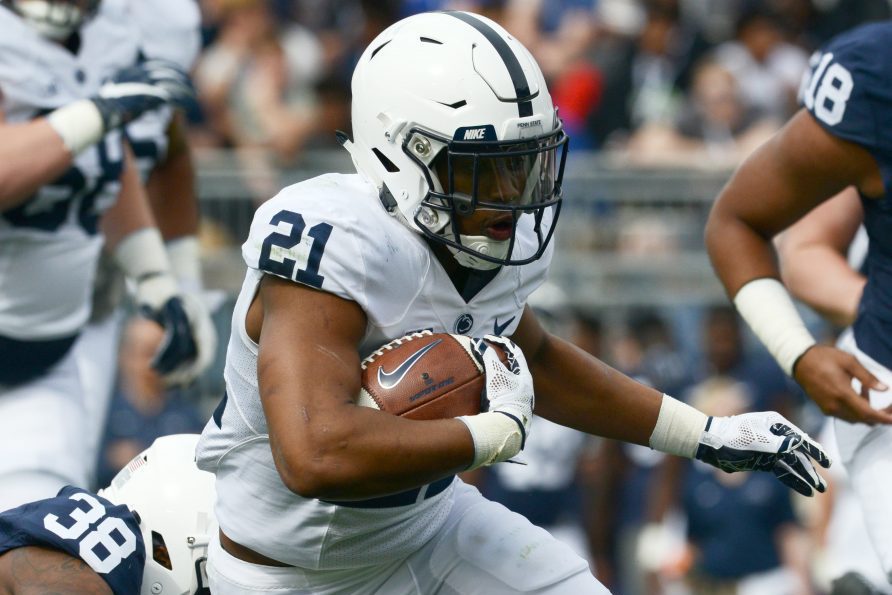 The majority of the focus on the Penn State backfield in 2019 will fall on 5-star sophomore RB Ricky Slade. For my first ever devy article I originally chose to write about him. However, when watching the Penn State Blue & White spring game my eyes gravitated towards true freshman RB Noah Cain. This kid was the star of the day running with power and keeping the 2nd team in it against the starters. Without further ado let us examine who this kid is and what he brings to Happy Valley.

Noah Cain began his journey to Happy Valley in the small town of Denton, Texas. He was the star RB for Guyer High School where he tore up the field. Cain’s talent was evident from the beginning as he rushed for 1,083 yards and 10 TDs as a freshman. Following his sophomore season, he was ranked by 247 sports as the number 1 RB in the 2019 class. That ranking was based off his monster season in which he compiled 1,683 yards and 22 TDs! Needless to say, this season attracted the attention of scouts and rival prep schools across the nation. You can see his amazing highlight film from that year below.

You can see from the video that Cain runs with great power and balance. He sets up his blocks well and has worked extensively on his mesh point with his QB in the read-option. All of his hard work paid off when Cain was offered a role at the prestigious IMG Academy in Florida. According to Cain himself, “It wasn’t easy. It came down to the last minute. My parents and I discussed it so much. We thought it’d be a good opportunity for me athletically and academically to try it out and see how it is down there.” So with that Cain transferred to the $72,000 per year IMG Academy.

During his time at the IMG Academy, Noah Cain would pair with eventual Alabama recruit Trey Sanders to form the best high school backfield in the nation. Swimming in deeper waters Cain did not receive the same workload at IMG. However, despite the decrease in touches Cain still managed to flourish and show the skills that brought him to IMG’s attention in the first place. IMG played an 8 game slate instead of the 10 or 12 Cain had played at Guyer. You can see below from the stats courtesy of www.maxpreps.com that Cain was on the same level as Sanders who ended up being the number 1 RB recruit in the nation.

Following their time at IMG both RB’s would be ranked in the top 5 with Sanders at Number 1 and Cain at Number 5. Both players were also highly recruited across the nation. Below you can see Cain’s senior highlight film.

After finishing his high school career Noah Cain was invited to participate in the Under Armor All-American skills challenge and game. Cain was the winner of the gauntlet challenge. During the game, he also showed well for himself displaying the power which has become his hallmark. Needless to say, Cain was recruited by several big-time colleges. Chief among his suitors were Texas, Tennessee, Arkansas, and Penn State. Cain eventually chose Penn State, praising the work of RB coach Ja’Juan Seider who had helped both Saquon Barkley and Miles Sanders become highly drafted NFL RBs.

In choosing Penn State the young Noah Cain joined a team that was already stacked with talent. Chief among his new teammates is former 5-Star recruit sophomore Ricky Slade who displayed big-play ability in his limited time as a true freshman. The team also boasts a number of other talented highly recruited RBs. Despite all this, Cain early enrolled in the University this past January and participated in the team’s annual Blue & White spring game. As I stated earlier it was this contest that originally caught my attention.

When breaking down Cain’s performance in this game I noticed many different skills that shone through. First and foremost was Cain’s ability to run between the tackles. This ability could garner the freshman early playing time in his career at Happy Valley. He was more than efficient in following his blockers. He showed the ability to both create his own yards and take what the defenders gave him. Cain showed soft hands with the few targets he was given and most importantly a nose for the endzone. He is fast enough to get outside yet powerful enough to break arm tackles. Showed good vision and patience allowing holes to open before powering through. A very natural and fluid athlete. Being a true freshman it will be years before Cain can enter the NFL draft. However, this does not mean that we should ignore his progression through the college ranks. The best dynasty devy players are making moves with an eye towards the future. I cannot recommend enough that you follow this young man’s journey through the college ranks. I will leave you with the highlights of his Blue & White game performance and you determine if his skills will translate to the college level and beyond.

Thank you for reading this article! Please be sure to join the #Nerdherd so you don’t miss out on any of the amazing things we have to offer at DynastyNerds.com Follow me @reflipewthenuz for more dynasty content & other musings.