Got NCAA waivers coming up your C2Cs? Consider these options. @sharpereview breaks it down. 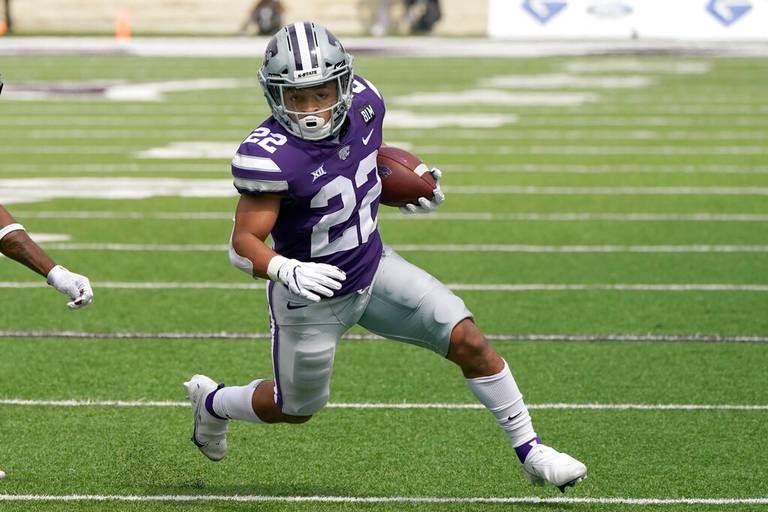 In the niche but growing Campus 2 Canton format, team managers generally have specific weeks to place a waiver claim. Usually, there is a waiver run midseason (Week 4), then a second waiver run occurs toward the latter half of the season (Week 8). There is an added sense of angst and anticipation since there are only two opportunities to pick up free agents throughout the season. Further, teams can only pick up one player during each waiver run. Due to the COVID adjusted college schedule, Campus 2 Canton managers are forced to make choices about waiver claims after only seeing a few games from college teams. In this post, I’ve identified my top 10* waiver considerations in the C2C format. The player’s current ownership percentage is listed in parentheses.

We now know why incumbent starting quarterback Isaiah Green entered the transfer portal just two months before the start of the season. Wells was ready to take the helm as a redshirt freshman. Starting as a freshman at any level of college football is nothing to sneeze at. Wells has been good, albeit inconsistent through four games of college action. He started with a bang (16/23/307/4) against Eastern Kentucky in one of the first televised football games of the COVID era. He was rocky against a tougher opponent in Appalachian State before settling in against Western Kentucky. Quarterbacks can be hard to come by in Campus 2 Canton formats. You could do worse than a developmental freshman with a 159.5 quarterback rating through four games.

BYU features a two-man running back committee with Allgeier serving as the two-down thumper with speed and Lopini Katoa’s serving as the versatile satellite back. Allgeier has the ideal size for the position at 5’11, 220 pounds. He moves well at that size. He’s already posted two hundred yard games and one 90 yard game where he averaged nine yards per carry. Allgeier flashed the ability to be utilized in the passing game in BYU’s comeback last Friday against Houston, posting five receptions for 61 yards. If he continues to be involved in the receiving game, then Allegeier could be a bell cow. He has NFL potential, given his size and speed.

Florida appears to be in the midst of a brilliant offensive season, reminiscent of 2019’s LSU Tigers. Through three games in 2019, Joe Burrow posted 11 touchdowns and just two interceptions. Through three games in 2020, Florida’s Kyle Trask has posted 14 touchdowns to only one interception. To draw the analogy further, Kyle Pitts is Ja’Marr Chase, and Toney is Justin Jefferson, operating as the second option in the passing game. Toney is on pace for career-best numbers. He does not have a ceiling nearly as high as Jefferson’s. The tweener is primarily a slot receiver, but he can also take hand-offs. I prefer other receivers on this list, but Toney is interesting.

Flowers has emerged as a deep threat for a Boston College program known for its rushing attack and not necessarily its passing prowess. But new head coach Jeff Hafley brought the aerial attack with him from Columbus, Ohio to Boston College. Flowers is feisty, fast, and fun. Flowers is a smaller receiver who can turn into a punt returner once the ball is in his hands. Look for Flowers to dominate the BC target share for least one more season, and probably the next two seasons.

Tucker is a bursty bowling ball in the make of former Oklahoma Sooner Samaje Perine. But unlike Perine, Tucker is not operating in an elite high flying offense. Tucker needs to get going on the ground because he has not offered much in the receiving game. But Tucker has been effective on the ground, with 100+ yards rushing in two of four games. The true freshman has plenty of time to develop and should be a focus of the Orange running game for the foreseeable future.

Between Ricardo Louis and Darius Slayton, Auburn has produced some under the radar athletic, deep threats. Schwartz is overshadowed by Seth Williams but has better pure speed. Schwartz, a high school track star from Florida, is not a player you’ll want to be starting on the NCAA side of your Campus 2 Canton leagues. But pick him up, hold on to him, and wait for his value to skyrocket after the NFL combine – whether that be in 2021 or 2022.

Moore has been a revelation absorbing targets while injuries have hampered jake Smith. At 6’1, 179 pounds, Moore can afford some extra weight. But Sam Elingher has trusted the lanky Moore around the goal line and deep so far this season. Texas’s pass-heavy offense should afford Moore plenty of opportunity, even after Elingher departs following this season.

Every conversation about Vaughn begins with his diminutive size. So let’s start with the numbers. The freshman all-purpose back is averaging 5 yards per carry and 31 yards per catch. You read that right.  He leads Kansas State in both rushing and receiving yardage.

McCall has the Chants undefeated and ranked in the top 25 for the first time in the program’s history. I’ve analyzed his skill set more thoroughly here. McCall is accurate, athletic, and does not put the ball in harm’s way. Further, he has the frame, talent, and time to develop into a legitimate NFL prospect. #ChantsUp. #ChantsUp indeed.

Before the season, the question was which receiver would emerge as a secondary option to 2019 freshman sensation George Pickens. But through four games, Jackson has overtaken Pickens, leading the Bulldogs in receptions, receiving yards, and yards per catch. Jackson has gone from unknown to number one receiver at a blue blood Power 5 school.

Mingo is the third leading receiver on his team, taking a backseat to tight end Kenny Yeboah and slot man Elijah Moore. But Mingo has tantalizing physical tools. At 6’2, 215 pounds, Mingo possesses a rare thick build for the wide receiver position. And he has enough speed at that size to be dangerous. Further, Mingo plays to his size showing attitude and physicality after the catch. The production should come for a player with these traits. The question is whether he has the accompanying skills.