Is it time to get out on James Robinson? What is the value? Can his value be salvaged? @Culture_Cioach takes a look. 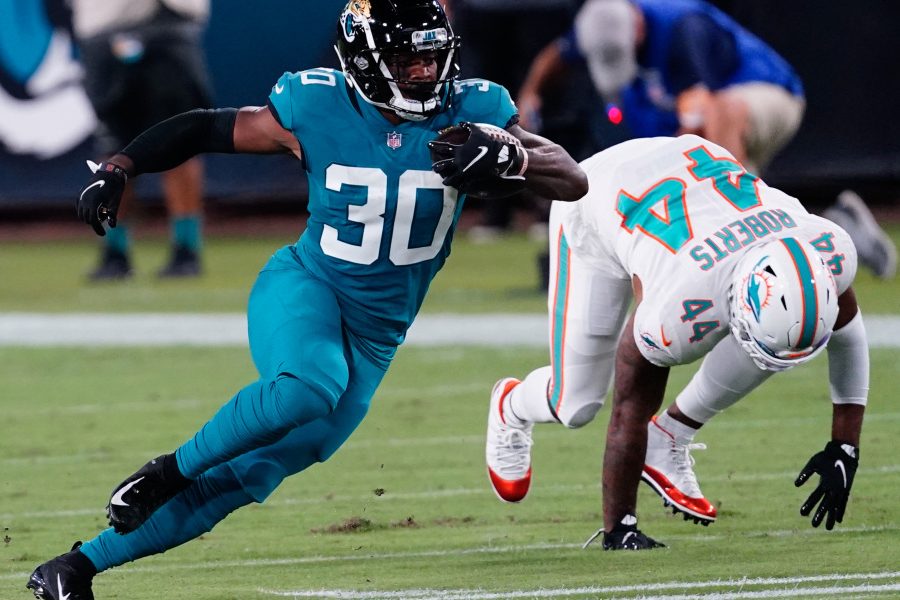 It has been a tumultuous offseason and start to 2021 for James Robinson managers if I’m being polite. After landing in Jacksonville as an undrafted free agent, Robinson had a breakout rookie season. Life in the NFL as an UDFA is fraught with peril. The team always seems to be looking for a replacement for you. Fantasy managers are no different. We are wary of players with little to no NFL draft capital.

In 2020 Robinson stepped up when Leonard Fournette was released. The Jaguars did not seem to have much to play for. Still, Robinson delivered 1070 yards rushing, 49 receptions for an additional 344 yards, and 10 total touchdowns. The proverbial winning lottery ticket for fantasy managers. But, as I said earlier, the life of an UDFA is perilous.

A late-season win by the Jets landed the #1 overall pick in the Jaguars lap. The team jettisoned head coach Doug Marrone for shiny new coach Urban Meyer. It looked as all systems were a go to add highly regarded signal-caller Trevor Lawrence.

There were plenty of holes that needed to be filled in the draft. As expected, the Jags grabbed Lawrence with the first pick. Then, surprisingly, they chose running back Travis Etienne, Lawrence’s college teammate, with their second pick of the first round. Just what the James Robinson fantasy manager did not need.

We consoled ourselves with the rumors that Meyer really wanted to draft Kadarious Toney, but the Giants had beat him to the punch. With Toney as his true target, we told ourselves, surely that meant that JRob would maintain much of his 2020 role. Surely, Meyer drafted Etienne to be a complementary piece.

I’d rather be lucky than good

As luck would have it, Etienne suffered a season-ending Lisfranc injury in training camp. Well, lucky for Robinson fantasy managers anyway. I don’t wish injury on any player. I do, however, react accordingly to the impact on my teams. This was positive for Robinson. The other depth RB on Jacksonville was offseason free-agent signing Carlos Hyde. Hyde is at the point in his career that he is veteran depth. Not going to make mistakes, but he has no ceiling left in his game.

It looked like Robinson was set to deliver a second season of fantasy relevance.

Week 1 at the Houston Texans looked like a comfortable victory. Houston’s front office seemingly spent the offseason dismantling the Texans in much the same way a fantasy manager who takes over an orphan team does. The Texans did not look good on paper. Welp, the Texans dropped a 37-21 loss on the Jaguars.

What most Robinson managers thought would be a good fantasy game for Robinson was a nightmare. The smartest man in the room, Urban Meyer, put together a game plan the saw Robinson play the ‘change-of-pace’ back to Carlos Hyde’s lead-back role.

It was the same result in the won/loss column for the Jaguars, a 23-13 loss to Denver. However, for James Robinson, he out-touched Hyde 11 carries to 2 and out-targeted him 3-2. Robinson converted all three of his targets to receptions while Hyde was 0/2. As Jack Miller breaks down below, Robinson’s snap share and touches are starting to fall in line.

We’ve got this year

The 2021 Jaguars are going to be bad. At least that is what it looks like after two games. Robinson reeled in 49 of 60 targets last year and is on pace over 70 targets this year. If he can convert close to 2020s 81.7% catch rate, Robinson should be almost as productive as last season if, and that’s a big if, he can get 14-16 carries per game. It looks like game script may be an obstacle to rushing volume.

If I am contending, I might look to acquire JRob for depth. I’d be willing to give a second and a third-round pick for him. Especially if the third is a ’23. Getting it done now before Robinson puts up a couple of good games would be the way to go.

If I’m looking to sell, I’m watching the production and creating a ‘usage’ narrative in the group chat. I’d be looking to get a ’22 or ’23 first. I’ll be using the “It’s going to be a late first” line to close the deal.

Etienne will return next season and should be as good as ever. The role of Etienne will be larger than Hyde due in large part to the explosion he provides. Another good season and Robinson might secure his position as the lead back beyond the 2021 season. I’m not sure I’m willing to take the risk.