Can Mims make a leap in year two?

Denzel Mims got off to a slow start as a rookie, can he turn it on in the new look Jets offense in 2021? 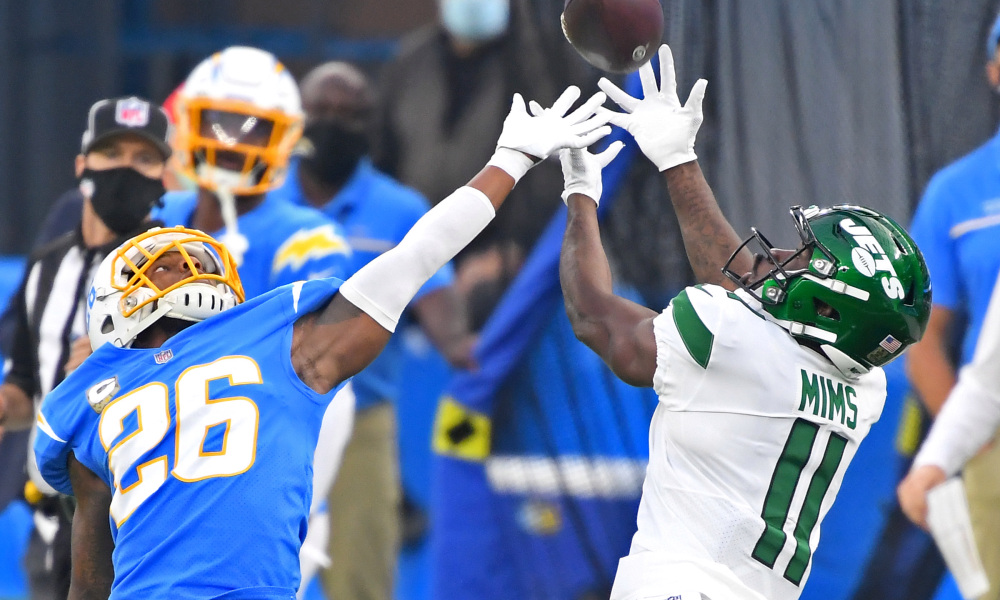 Every year fantasy players get excited about hot new prospects during rookie drafts. Some hit big and some don’t live up to expectations—at least in year one. But a slow start as a rookie doesn’t preclude a player from delivering a return on investment for the team that drafted them, whether in the NFL or in the world of fantasy.

One of the players taken with promise last season was receiver Denzel Mims, who was a second-round selection of the New York Jets. With plenty of perceived opportunity in the receiving group, many thought Mims had a chance to pop as a rookie. That didn’t come to fruition in 2020, but the question is whether Mims can step up in 2021. Let’s consider the evidence.

The rookie got off to a rough start, beginning the season on injured reserve. When he finally saw the field, Mims finished his first year with 23 receptions for 357 yards on 44 targets. Mims appeared in nine games, starting eight, but didn’t make a huge splash. He did have four games seeing seven or more targets mid-season, catching at least three passes in each of those games. During a three game stretch Weeks 9, 11 and 12, Mims had at least three receptions and 62 yards per game, producing 10-plus PPR points in each matchup.

While it wasn’t an incredible rookie season, Mims wasn’t the only member of the 2020 Jets’ offense that struggled. The team produced just 2,796 passing yards and 16 TDs total. Despite only playing in about half the team’s games, Mims was fifth on the team in targets. Among the four that finished above him two—Braxton Berrios and Breshad Perriman—are no longer on the team. Mims production in a limited role suggests he could be poised to take a step forward if he stays on the field in 2021.

While Mims looks to step forward in year two, the Jets’ offense as a whole is looking for more production. The team was active in free agency, signing Corey Davis and Keelan Cole at the wide receiver position. The bigger of the two signings is Davis, who was a first-round pick for the Tennessee Titans in 2017. In four seasons in Tennessee, Davis caught 207 passes for 2,851 yards and 11 TDs. His three-year free agent contract suggests he could be a focal point of the passing game.

The team also returns last year’s top receiver, Jamison Crowder. Crowder led the Jets with 59 receptions for 699 yards and six TDs on 89 targets. The wild card is Cole, who had flashes during his time with the Jaguars. Cole caught 159 passes for 2,242 yards and 12 TDs in four seasons in Jacksonville, including 55 for 642 and five TDs in 20202.

These three, plus tight end Chris Herndon and Mims give the Jets’ plenty of passing weapons. That should be a boon for whoever starts at quarterback, most likely BYU product Zach Wilson.

The Case for Mims

Mims was a solid second round pick in rookie drafts last off-season thanks in part to the perceived opportunity in his landing spot and his second-round draft capital. Mims was a three-year starter at Baylor, catching 186 passes for 2,925 yards and 28 TDs, including 66 for 1,020 yards and 12 TDs as a senior. His rookie production, while not eye-popping, showed promise, especially given the offense he was in and his limited number of games played.

While the Jets have increased competition, Mims is poised to step up in year two. For those that drafted Mims, he’s worth holding on to as the Jets offense gets a makeover with a new quarterback and a new scheme from Offensive Coordinator Mike LaFleur. For those who have league mates that drafted Mims and lost faith during his rookie year, he is a good buy low candidate heading into his sophomore season. Getting Mims for a late second or a third round pick, or better yet a 2022 second, is worth the swing.