Can Rashod Bateman Thrive in Baltimore?

Rashod Bateman was selected 27th overall by the Ravens. Concerns over his role in a low passing volume offense have now come up. Can Bateman thrive in his new situation? @WhyDoIEvenTryFF takes a look at Bateman’s outlook with the Ravens here. 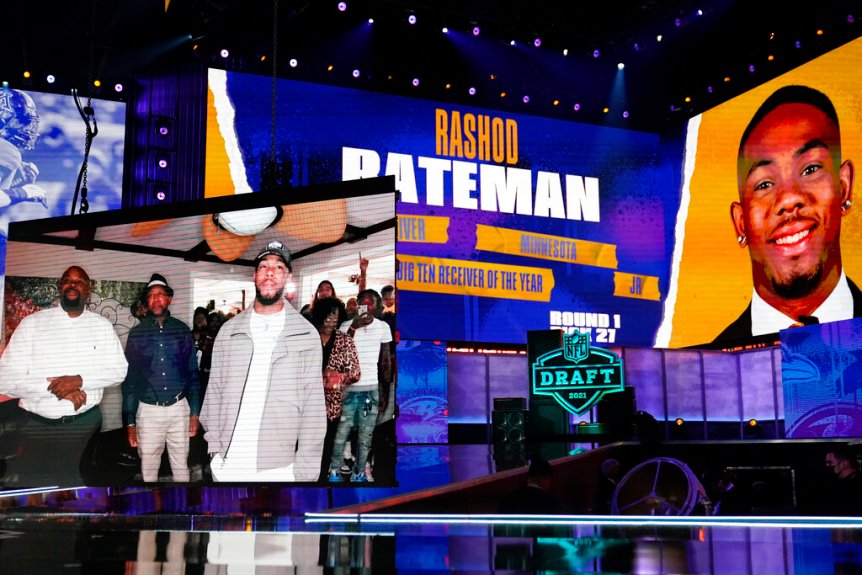 The Baltimore Ravens selected two receivers in the 2021 NFL Draft. The assumption was that the Ravens would target a wide receiver early in this draft, especially when they acquired an additional first-round pick from Kansas City. They did just that, selecting Rashod Bateman with the 27th pick. Later, they selected Tylan Wallace in the fourth round. With this kind of draft capital spent on wide receivers, what should we expect from the Ravens this season? Will Bateman be able to thrive?

The main concern is the low-volume passing attack from the Ravens. The Ravens have finished last in passing attempts in each of the last two seasons. While that is far from an enticing situation, that does not mean that a wide receiver cannot perform well. I believe that talent will rise to the top, regardless of the situation. Rashod Bateman is the kind of talent that will rise to the top.

A great example would be A.J. Brown in Tennessee. The Titans finished 30th in pass attempts in 2020 and 31st in 2019. Despite the low passing attempts, Brown finished as the WR12 in 2020 and the WR21 in 2019 in PPR leagues. Bateman may not be A.J. Brown, but if he was one of your top rookie wide receiver prospects, then the landing spot should not change anything. If you believe in a player’s talent, don’t let the landing spot alter your opinion. Here is a clip showcasing his talent after the catch.

I also believe that the Ravens increase their passing attempts in 2021. Teams will sometimes speak with their actions, and by selecting Bateman and Wallace, the Ravens tell me that they want a more balanced offensive attack with better weapons. However, they need to become a better passing team if they’re going to take their team to a new level.

Another concern is that Lamar Jackson is just not a good passing quarterback. Despite the accuracy concerns, I don’t think he is all that bad. PlayerProfiler.com has Jackson 18th in true completion percentage and 23rd in deep-ball completion percentage. He finished 22nd in the NFL in passing yards and finished 12th in passing touchdowns. While those are not stellar numbers, it definitely could be worse.

Adding a talent like Bateman will help get those numbers up, as they have lacked a great wide receiver for a while. Adding Wallace will help too. He may not be as talented as Bateman, but he is a solid receiver who will help the offense. According to PlayerProfiler.com, Marquise Brown’s contested catch rate was 26.7% (96th). Adding Bateman and Wallace will give Jackson some weapons that can go up and get it and make those contested catches. With Jackson finally surrounded by a good receiving core, I cannot wait to see what he can do in 2021.

Here are a couple of clips of Bateman making ridiculous contested catches, adding a missing element to the offense.

Jackson is more efficient in the RedZone than most quarterbacks too. ProFootballReference.com had Jackson posting a 67.24% completion percentage in the RedZone, third among starting quarterbacks. Jackson was also 13th in pass attempts inside the 10-yard line. The Ravens throw more inside the 10-yard line than you would likely assume. An offense led by Jackson will have plenty of scoring opportunities, and Bateman will be a better RedZone threat than Brown. Brown led the team with eight receiving touchdowns, so despite what some may think, tight ends are not the only receivers who catch touchdowns from Jackson.

The Alpha of the Offense?

For his entire collegiate career at Minnesota, Bateman was listed at 6-foot-2 and 210 pounds. He then shocked everyone at his Pro Day when he measured in at 6-foot and 190. In an interview during his pro day, Bateman said he lost weight due to contracting Covid-19 before the 2020 college football season. He also said that he did not feel like himself after that, but he is now back to being himself and looking to gain some weight.

I think that Bateman still profiles as an alpha-type receiver, even with his smaller-than-expected frame. I believe that he fits perfectly with what the Ravens need. Bateman checks all the boxes that I look for in an alpha receiver when looking at the size, route running, and ball skills. Marquise Brown is talented, but he is more of a complementary piece than a true No. 1 option in an offense. Sammy Watkins has not produced in ages, so I am not concerned about him. Wallace is a solid and promising rookie, but he does not have the draft capital or skill set that Bateman does.

Regarding Bateman’s fantasy outlook, I would expect him to be a consistent WR2 with WR1 upside, even in a low passing volume offense. In Brown’s two NFL seasons, he has finished 46th and 36th in PPR leagues. I see Bateman beating that as he is the superior prospect and receiver. He has an opportunity to dominate targets in a high-scoring offense.

Many dynasty players will be scared off of Bateman for the concerns that I listed, which will make Bateman an incredible value. There is a possibility that he is available at the beginning of the second round in upcoming rookie drafts, and I will jump all over that value all day. He was my WR2 before the draft, and that has not changed!