Can you SNELL it? 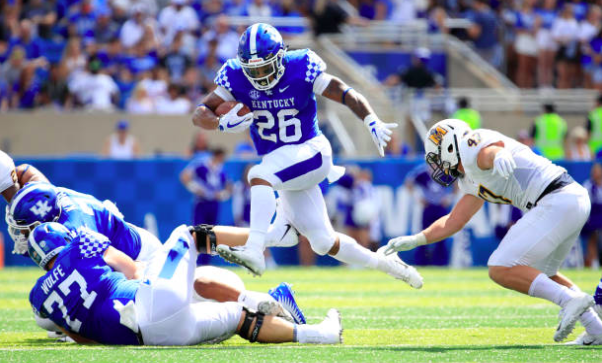 We all have the big name guys that all the big name analysts are talking about. You can have them. All of them. I want a bell cow who was the focal point of a team in the SEC. I don’t want Josh Jacobs or DK Metcalf, I want another bruiser from the SEC, the productive Benny Snell. Dynasty Garret (@GMP_33), this one is for you!

Watching Benny and looking at his stats are two close, but very different things. His stats show he is an extremely productive running back, but the tape makes him look like the best player on the field with power, good burst and vision, and a solid frame that can withstand punishment. However, Snell’s YPC actually dipped slightly every year in college, as in 2018 starting QB Terry Wilson only passed for 1,889 yards, making Benny the focal point of the offense. He still got it done. Look at his yearly production:

So while his YPC per year decreased slightly, total yards and receptions did increase yearly, though he was not a huge asset in Kentucky’s anemic passing game. While I would love to see Benny step it up in the receiving game, some areas where he is NFL ready is durability and pass protection. He rarely leaves the field and usually has blitzing defenders squared up in pass blocking, which should be a selling point to NFL teams.

I love Benny over 2 other SEC running backs that have declared for the draft, Alabama’s Josh Jacobs and Texas A&M’s Trayveon Williams. While Williams only has roughly 200 yards less rushing yards then Snell, he got the majority of his yardage through his monster 2018 campaign.

Yards per carry and yards per reception wise he is better, but he has also touched the ball 100 less times and is not as stout of a pass blocker. Injuries are also a concern as he has missed time (partial games) due to various ailments.

As far as Jacobs goes, he was more of a rotational player and with a loaded Crimson Tide team he never really got his time to shine.

Once again his per carry and per reception yards are better, but he touched the ball 467 (you read that right) times LESS then Snell. Benny simply does not leave the field and on a weekly basis churns out yards and touchdowns. He is the Wildcat’s unstoppable workhorse.

In conclusion, Benny is not sexy or flashy, but he is productive. Watch where he falls on draft weekend because he may be a day 1 starter in the NFL and on your dynasty team.