Carson Wentz Has Been Shipped To Indianapolis

Philadelphia Eagles QB Carson Wentz has been traded to the Indianapolis Colts. Let’s find out what this means for Wentz and the Colts skill position players moving forward. 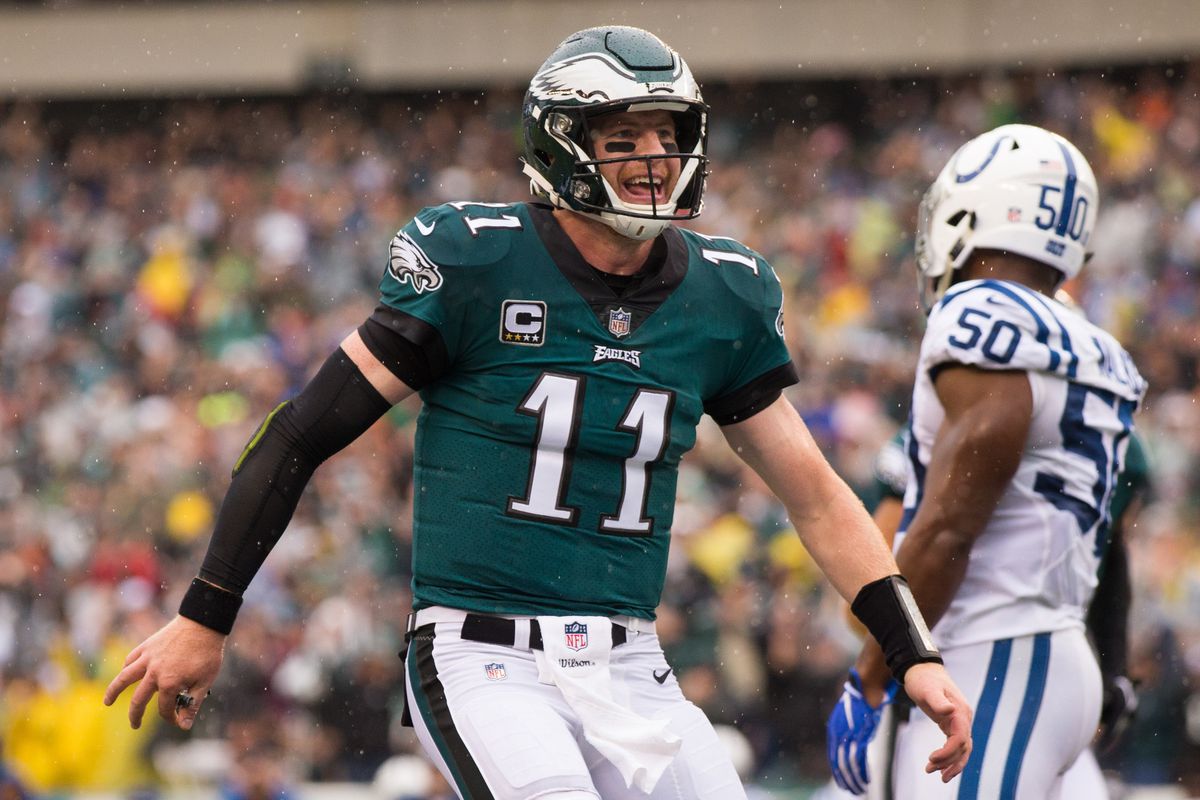 After a standstill for several weeks, quarterback Carson Wentz will be suiting up for a new team this fall! The Philadelphia Eagles traded the once-promising QB to the Indianapolis Colts. In exchange, the Eagles received a third-round draft pick in the 2021 NFL Draft and a conditional second-round selection in 2022. That second-round pick could be a first-round selection if Wentz plays 75 percent of snaps or 70 percent and the Colts make the playoffs.

Wentz is still under contract for another two years as a part of the massive four-year, $128 million contract he signed in June of 2019. He’ll be replacing QB Phillip Rivers, who retired shortly after the conclusion of the Colts season. With Wentz still under contract and owed a lot of money over the next two years, the Colts hope that he can return to his former self. The version that finished as an All-Pro in 2017 with the Eagles.

Reunited and It Feels So Good

The most significant impact of this trade will be on the player that was directly involved. Wentz gets to reunite with his former offensive coordinator (OC), Frank Reich, who is now the Colts’ Head Coach (HC). Reich captained the Eagles offense in 2016 when Wentz was a rookie. By rookie standards, that season was a decent one. Wentz finished the year with a 62.4 percent completion rate while posting 3,782 passing yards, 16 touchdowns (TD), and 14 interceptions (INT). He also ran for 150 yards and two TDs on 46 carries. Those numbers don’t jump off the page, but Wentz showed a lot of promise.

That promise became a full-fledged reality in Wentz’s sophomore campaign with Reich. He set the NFL on fire as he threw for over 3,200 passing yards and 30 TDs. He also dropped his INT total to just seven. However, Wentz’s completion percentage did drop to only 60.2 percent. The Eagles started 11-2 that season and were ready to make a splash in the playoffs. Then, tragedy struck. Wentz tore his anterior cruciate ligament (ACL) in week 14 versus the Los Angeles Rams. It put a damper on a great season.

Reich would leave to become the HC of the Colts after that season. Meanwhile, Wentz would continue to battle through numerous ailments. He could never quite replicate the MVP caliber season he had with Reich. That’s all subject to change now as the pair will reunite in Indianapolis.

Looking to the Future

Wentz and Reich pairing up once again will be a treat to watch. Since Luck’s retirement, the Colts have just been making do with QBs like Jacoby Brissett and an older, declining Rivers. Now, the Colts and Reich have a viable QB.

I expect the pair’s success in 2017 to be replicated in 2021. Sure, that’s the easy answer, but it’s the correct one. I expect it to be even better. First and foremost, the Colts have one of the best offensive lines in the NFL. Following the 2017 season with the Eagles, Wentz’s sack totals have continually risen, finally reaching their peak in 2020 as the Eagles gave up 50 sacks. I expect him to be protected better with the Colts moving forward. Better protection for Wentz means he can go back to what made him so special for fantasy, the deep ball.

All-in-all, Wentz will post slightly more improved fantasy numbers than what he did in 2017. That year, Wentz played in 14 games, eight of which he finished with 20 or more fantasy points. It’s also worth noting that Wentz never really busted. Wentz had only one game where he finished with less than 15 points. He was stable and reliable. With the Colts, I expect that to be true once again. However, his high points have the chance to be much more explosive. With the disrespect being thrown his direction in the fantasy community, he’ll be a draft-day steal.

I don’t expect a positive impact to be made to the running back (RB) position. Wentz has never really fed receptions to the RBs in his offenses. In Reich’s two seasons with Wentz and the Eagles, the RB position received 167 targets. RB Darren Sproles was responsible for 71 of those in 2016.

I expect RB Nyheim Hines to be given targets as he’s a focal point of this offense and is very Sproles-like. However, RB Jonathan Taylor will see a dip in targets. It won’t be a huge drop-off, but his targets will be closer to 20 than the 36 he had last season.

The Colts wide receiver (WR) position in 2021 will be identical to what the Eagles had in 2017. As it stands, WR Parris Campbell will fit into the underneath, occasionally go deep role that WR Nelson Agholor had. Oh, and doesn’t WR Michael Pittman Jr. slide perfectly into WR Alshon Jeffery’s role? While these roles fit these players well, I do expect there to be some differences.

First, I don’t know what to think of Parris Campbell. He struggles to stay healthy, and Wentz doesn’t love throwing intermediate passes. Those two things don’t mix well. The best move for Campbell owners would be to capitalize on the value while you can. I loved him coming out, but this isn’t a great combination. I’d target a 2021 third-round rookie pick, but start with a second-rounder and see where things go from there.

Second, I can’t stress it enough, get Pittman. Wentz loves bigger receivers like Pittman. That’s why everyone loved WR J.J. Arcega-Whiteside’s landing spot in Philadelphia. He feeds those WRs, and Pittman showed a lot of promise in his rookie season with the Colts last year. Also, the Colts don’t have a great option at TE. Those targets will more than likely be heading Pittman’s way. He’ll be a target hog next season, mark my words. This might sound crazy, but I would look to trade a WR like Cooper Kupp for Pittman and a 2021 second-round rookie pick. It’s a gamble, but it’ll pay off in the long run.

There’s not much to say here. It’ll be a group effort next year. Not one of these players are as good as the tight ends (TE) on the Eagles the past several years. The simple advice would be to avoid the position altogether until. Jack Doyle has proven to be a reliable pass catcher in the short area when he is healthy. Bringing back Trey Burton or Mo Alie-Cox during free agency could provide stability at the position.

This is a rare situation where I don’t think anyone will be negatively impacted massively as a part of this trade. Taylor will see a minor dip in targets that will hurt his upside, but it’s not damaging. The TEs will get targets their way and be just as valuable as they were last year, which wasn’t that valuable. The Colts are on the up-and-up, and I can’t wait to watch them next fall!