In a loaded WR class @SportsfanaticMB tells us why CeeDee Lamb might just be the best and safest bet for the NFL and fantasy. 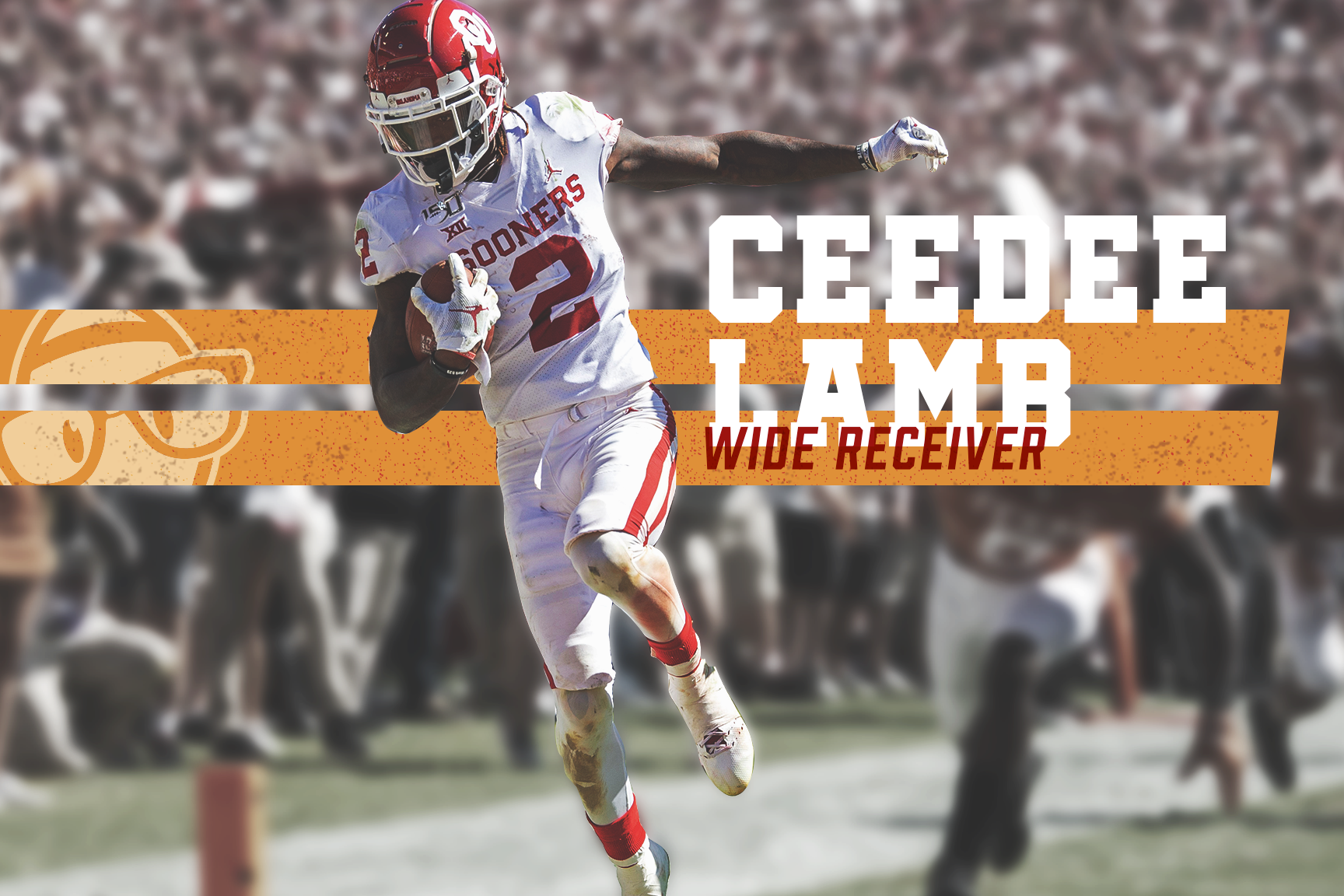 CeeDee Lamb is a junior wide receiver out of Oklahoma. Lamb joined the Sooners as a four-star prospect out of Richmond, Texas. Lamb garnered attention his freshman year with some great catches, while he was easily third in line having to play with Marquise Brown and Mark Andrews both now in the NFL with the Baltimore Ravens.

Moving into his sophomore year he was still behind Brown in the lineup but received only 10 fewer receptions than him. Lamb showed he could play all over the field. While many had Lamb on their radar for what he did throughout 2018 he got his shot on the national stage and opened some eyes. Oklahoma finished as the fourth team in the College Football playoff committee and played Alabama in the Orange Bowl. Alabama jumped on Oklahoma early. Marquise Brown entered the game hurt and was limited which gave Lamb his shot. Lamb put up great numbers putting his name and game out there for all to see. 8-for-109 yards and one receiving touchdown against one of the better defenses in college, Alabama was ranked 20th at the time. Lamb was no longer in the shadows and would be a huge part of the Sooners offense moving into 2019.

As the 2019 season kicked off Oklahoma added a new quarterback as Kyler Murray entered the NFL draft. Through the transfer portal, Jalen Hurts left Alabama and joined the Sooners. For many, this move scared Lamb advocates, as Hurts was known to be a runner and not much of a passer. After finally getting his shot to be the top option at Oklahoma could his QB deter is stock? The answer was no, and Lamb put that to bed quickly. While he caught three fewer passes than the year prior his YAC yards were incredible. He continued to put up a ton of yards and show off incredible catches.

Lamb did miss one game in 2019 with an undisclosed injury. Many believed the injury came on a helmet to helmet hit on a punt return against Iowa State. It caused him to miss the next game against Baylor but played in every game after that. Including a big game in the Big 12 Championship game putting up 8-for-163 yards. That performance helped lead his team into the playoffs again for the third straight year. They would, unfortunately, end up getting beat handily by LSU. Even in a tough matchup against the LSU secondary Lamb posted 4-for-119 yards. After two strong years, Lamb who is in the discussion as one of the top wide receivers decided to enter the NFL draft.

The table above highlights Lambs big play ability. As you see in this table from ExpandtheBoxscore.com 26% of the plays Lamb was involved in were big plays. 24 plays over 20 yards, nine of which resulted in touchdowns.

At first glance, the table below seems the show Lamb disappearing later in games. While you would like to see a stud WR like Lamb get the ball later in the game a closer look at the game logs shows the Sooners starters sitting out dues to Oklahoma having the games easily in hand. Outside of a few close games there wasn’t much need for Lamb late in games. In the UT game and Big 12 Championship game Lamb made big plays late in the game to help secure a win for the Sooners.

Let’s now take a look at what CeeDee Lamb excels at and what will garner him attention in this populated draft class.

Here Lamb shows off his strength and elite hands. Great job of holding onto the ball through the contact and then fighting to get into the end zone.

Lamb has elite ball tracking skills and I would argue the best in this class. Here is a prime example. He has the defender in his hip pocket and Hurts under throws the ball. Lamb looks back and watches the ball into his hands catching the ball while turning and falling. This is not something every WR can do.

Lamb has elite body control and he shows it here. His ability to go almost full extension and tap his toes here would make most NFL WR jealous.

I had to add this last catch/non catch. Again body control and hands or hand are just insane. To go full extension and on the way down try and toe tap is a skill not all WR have.

Lamb has so many strengths, it’s truly hard to find many weaknesses in his game. My biggest knock on him is his route running. He doesn’t always run the cleanest route and I do think some of that is his skill and ability to beat cornerbacks, which won’t be as easy in the NFL. I also think he lacks true home-run speed. Lamb is fast and elusive, but you can see him being brought down from behind in many instances. While I don’t think the speed will hamper him at the next level the physicality of cornerbacks might with his slight frame. Perfecting his route running could easily land him as one of the best WR in the game.

Lamb can fit with any NFL team and any offensive scheme. He is my fantasy WR1 in this draft class and should be in the conversation with Jerry Jeudy as the top WR taken in the draft. I do think Lamb will be the first or second WR taken. Teams in the first round I could see taking him are Arizona, New York Jets, Las Vegas, Denver, Miami, Philadelphia, and Buffalo.

No matter where he is drafted he has the talent to produce right away and shouldn’t need the typical three-year window it takes for most WR to succeed. Lamb will at worst be the number two option for most teams and out of the teams listed above for me the Jets, Miami, Denver, and Philadelphia would be prime landing spots to become the number one option. The Denver landing spot would be ideal as well seeing him paired with Sutton.

That completes the CeeDee Lamb draft profile. Continue to check back as new profiles will be released every couple of days. If you want to see more of my work you can find me on twitter @SportsfanaticMB and also on my podcast Fantasy Football Roundtable, where we will be discussing all the hot off-season topics and prospects.