Change For A Dollar – Why We Want to Keep Draft Capital 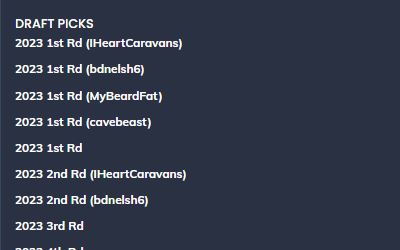 There are some strategies that see us use all of our draft capital to acquire veteran players. The saying goes that draft capital doesn’t help us win during the season. Managers can then attempt to trade back out of those players for draft capital prior to rookie drafts. While we understand that this is true in theory, a couple of downsides of this approach are largely going ignored.

You Need Draft Capital For Trading

A lack of draft capital is a hindrance to a win-new strategy, capping your ability to trade. If someone needs a player and a second-round rookie pick to make the trade even, we will need to have another player on our roster that the potential trading partner also values at the same or more than that second-round rookie pick we no longer have. Additionally, we will need to be able to part with that second-round rookie pick equivalent player. However, we may rely on that player to some degree for depth in our win-now season. To make the trade, we may now have to overpay and/or reduce our win-now chances. Alternatively, we would lose out on a much-needed trade.

Trading Into Picks Is A Destruction of Value

Rookie picks will appreciate over time, as denoted in the article on rolling rookie picks out into the future. If we don’t keep this draft capital, we can’t take advantage of this free value. See my prior article on Rolling Draft Picks into the future. We can add the equivalent of a free third-round rookie pick or an upgrade from a third to a second-round rookie pick every year by rolling draft picks back two years. However, the rookie draft picks can’t appreciate in value if we aren’t holding them.

Rookie picks don’t get injured or depreciate in value. By holding players instead of rookie picks, we are losing value upon an injury and as the player ages. If we are competitive, we want to be able to win WITH draft capital. If we need to liquidate our draft capital to compete, that begs the question of whether we truly are a win-now team. Note that the exception to holding players instead of picks would be holding young players. These players, generally speaking, increase in value as their role increases. However, rostering large quantities of these players typically runs counter to constructing a competitive team. These competitive teams are likely who would have sold off their draft capital.

We may see a competing manager lose a key player to injury and no longer want to compete. That manager could also approach the situation looking desperately to fill that spot. Either way, we can put ourselves in a position to acquire these injured pieces at a discount using our draft capital. If the owner concedes this year, the owner is no longer in the market for a veteran, so the other competing managers with no draft capital or younger players will find it difficult to make an offer. This allows us to make the strongest yet discounted offer with only the rebuilding teams left competing for that player.

For these five reasons, I believe we should hold onto at least some of our rookie picks in-season. If we quickly realize we aren’t competing for the championship, that is all the more reason. Draft capital is the currency and liquidity of dynasty leagues. Staying liquid will provide many advantages that may not be as obvious at first blush.