Fitzmagic makes his first appearance on the QB Start/Sit article by @MikeMeUpP! See who else you should be starting to advance to the next round of the playoffs! 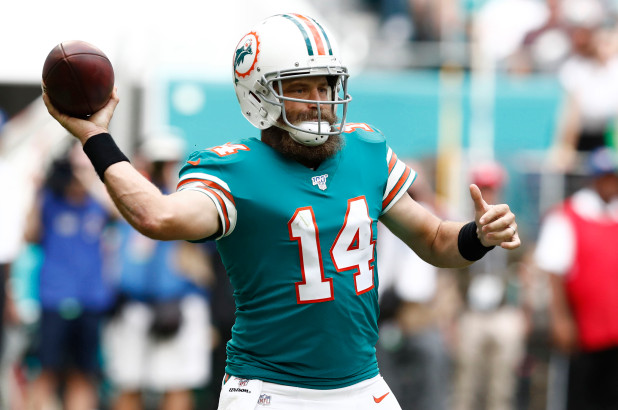 If you’ve been following along so far, we’ve been rolling with the picks, hitting 49 of 68 for a 72%+ hit rate. Hopefully, we can keep this good streak going. Without further to do, let’s get it!

Don’t look now but Fitzmagic is hitting full stride and might be that clutch fantasy streamer you were looking for finishing as the QB8 in the last 3 weeks. He gets another smash matchup this week against the Jets incredibly leaky secondary that just gave Dalton the confidence comeback game he was looking for. Some might be scared off by the Jets D who revealed the true Derek Carr but let’s face the facts, Fitzmagic is a better QB than Carr and he’s playing like he’s got nothing to lose, which he doesn’t. And that’s a dangerous Fitz to be playing against. He also has some sneaky rushing upside which helps provide some floor as well. It may make you feel a bit sick relying on Fitz for the first week of the fantasy playoffs but unless you have a solidified stud to plug in, he might be your best bet. I know that given I mostly stream QBs week to week, I’m going to be relying on Fitz in a couple of leagues myself so if this ship sinks with a 5 interception game, you can take comfort in the fact that I’ll be sinking with you.

I’m going to be staying with my Tannehill pick from last week despite being burned. The key difference is I do expect Carr to be able to put up some points this week playing at home in Oakland where he is significantly better than on the road. Both sides have very suspect pass defenses so the potential for a shootout is there. Given Henry has been slightly limited in practice this week, there’s also the chance that the offense shifts its focus more towards the passing attack to provide him some relief and keep him fresh for the playoffs. Damn, those are some words I didn’t think I’d be saying about the Titans and Henry before this season started. The Titans also have one of the higher implied team totals on the week so the opportunity for fantasy points to be scored is there. Finally, similar to Fitzmagic, Tannehill has been adding a decent rushing floor to his production with 30-40 yards rushing in 3 out of the last 4 games with 3 TDs on top over that same period.

Seen a lot of noise this week on Twitter about those thinking of benching Allen in favor of some of the better streamer options. I’m here to advise against it. I understand that Ravens have been a tough D but the rushing floor that Allen has shown makes him viable even in this matchup. Furthermore, the Ravens are traveling this week while Allen is actually at home. Allen has put up either 40 yards rushing or a rushing TD for 6 weeks straight! That type of floor is hard to come by so even if he is not able to put up the passing yards, I am still expecting him to get it done through the ground and return value on the QB15 consensus ranking.

Normally, I’d advocate for never benching Murray but there’s a couple of factors that made me put him on this list. First off, he’s coming off a fresh spanking by the Rams who ate the Cardinals OL for breakfast and now he’s getting the Steelers who have one of the best pass-rushing defenses in the league. Second, it’s unclear how the hamstring injury is going to be affecting him this week. As we know, the hamstring is one of the most tedious injuries that tend to linger and given Murray’s upside comes primarily from his legs, any limiting factors that make him less appealing. His performance last week would’ve been even worse had he not saved the day with a garbage time rushing TD. The one potential saving grace is that the Cardinals will be at home but I just don’t see how that OL holds up. I’m not saying to bench Kyler for Kyle Allen but I think if you had the option to go with one of the guys I mentioned above, I’d prefer them as the low-end QB1 is closer to Kyler’s ceiling this week than his expected outcome.

The GOAT makes his return to my list again this week but not in the section he’d want. I’ve put him on my sit list for more times than I’d like to admit but even as a Pats fan, I have to admit that our offense simply doesn’t look like it’s in gear. Brady looked awful for 3 and a half quarters of play last week before scoring some garbage time points in a game that the Texans almost found a way to lose. Classic Billy OB. The one issue I have with his fringe QB1 ranking this week is that everyone and their mom knows that the Chiefs defense can be had on the ground. And given the Patriots have no passing game to speak of, I expect them to lean heavily on the run at home in an effort to play defense through offense and keep Mahomes off the field as long as possible. This Pats D is still elite, despite what happened last week. For whatever reason, Watson seems to be the kryptonite as he’s always been able to load up on the points. I’m assuming that McCourty is also back this week which should help shore up the secondary once more. Maybe it’s the homerism speaking here but I don’t expect this one to be a high scoring affair with the Pats controlling the clock via the ground game.