Danny Dimes vs the GOAT, who to sit and who to start? @MikeMeUpP gives you the answers in the weekly start / sit article! 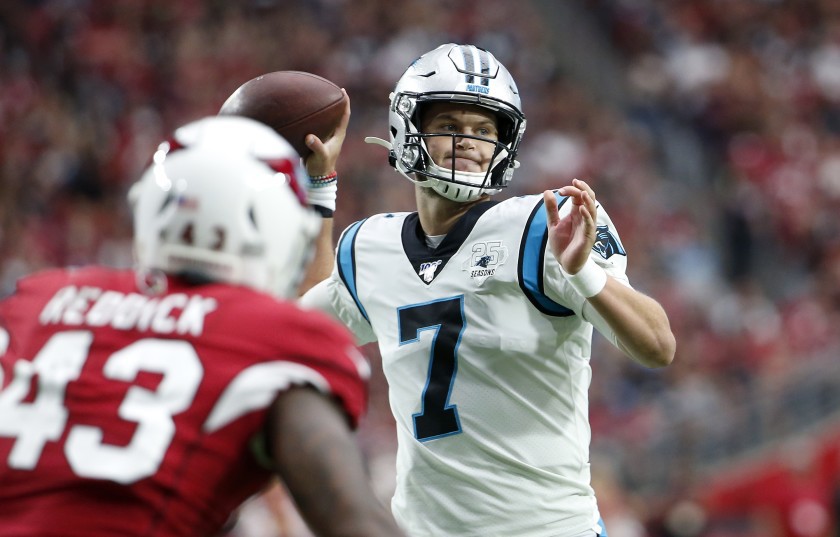 If you’ve been following along so far, we’ve been rolling with the picks, hitting on 9 of 13 or a 69% hit rate (nice). Hopefully, we can keep this good streak going. Without further to do, let’s get it!

Danny mf’in Dimes put on a show for the ages against what many (including yours truly) considered to be a new and improved Buccs D. I outlined why I thought he would be the most productive rookie QB after Kyler Murray in the first #Nerdherd Mailbag but he has far exceeded my expectations. Even though consensus ranking has him in the top 12, I think that’s way too low given the match up at home versus the Redskins secondary that just got lit up at home by Bortles 2.0. DJ is in my top 5 this week. You might think I’m overreacting here but I think the experts are not reacting enough. He showed traits during that game that you solemn see in some experienced QBs, never mind rookies. He has ice in his veins. So happy that I added him to a couple of dynasty teams before this week kicked off. I’m personally going to have DJ starting across 90% of my DFS cash lineups as well as in a few leagues. This game has all the makings of a shootout with two of the worst secondaries in the league and I’m all in. A new era of New York Giants football is upon us and DJ is the chosen one to lead us to the promised land. Giants fans should be excited because I sure as hell am!

I know, I know. I’m crazy, this makes you want to throw up, etc, etc. We’ve been here before. Just last week you probably had the same feeling with Winston but clearly, none of that matters. I don’t feel great about it either but at the end of the day, it comes down to the matchups. Last week, Keenum went against what is probably the best or 2nd best defense in the NFL in the bears. Despite that, he still put up the yardage and TDs but just happened to throw 3 picks and fumbled the ball as well. This week, he’s going to get the Swiss cheese Giants defense that Winston just lit up last week. As I mentioned above, this game has the makings of a shootout as both teams can score and neither can play defense. With McLaurin F1 on the team, Keenum is definitely capable of putting up decent numbers. All we need to do is look back to Week 1 where he finished as the QB6 while playing in Philly against another porous secondary. The Giants is even worse so fire up Keenum comfortably as my top 2 streams of the week. As of right now, Keenum is in a walking boot so if he sits, then Colt McCoy looks like he’s in line to start. Both are probably available on your waivers and be relatively free so we will need to monitor the situation. I’ll probably sprinkle a couple Keenum shares into my DFS lineups as well. Just be sure to monitor the situation to see if Haskins gets named the starter or not.

Another newbie makes the list this week with Kyle Allen. Many were surprised by Allen in his 2nd NFL start but if you’ve been following me on Twitter, you’ll know I wasn’t one of them. While others focused on Grier, I was on Allen. Allen was actually a top HS QB recruit and beat out 1st overall pick Kyler Murray at Texas A&M so the talent is there. He didn’t pan out in college for other reasons. I’m not saying Allen is a prodigy yet given he faced one of the NFL’s worst defenses last week in the Cardinals but at this point, he’s definitely a superior passer to the injured Cam which he put on full display. And this weak, he’s going up against a leaky Texans defense. Also, according to @Pat_Thorman, Panthers have the 3rd quickest seconds-per-snap rate and their games also average the most combined plays. All of which should add up to more potential for this being a higher scoring affair. Allen is a great QB2 play in SF formats this week.

As a die-hard Pats fan, this one pains me but it had to be done. Gone are the days of Brady hanging 6 TDs on the Bills as they have one of the best passing defenses in the league led by one of the NFL’s top cornerbacks in Tre’Davious White. The Pats also have one of the NFL’s best defenses and arguably Brady’s best defensive unit since his early 2000 Superbowl runs. I expect this to be a slow-paced game in which the Patriots grind out a win on the ground like last year where Pats took a 24-12 win with Brady throwing for 126 yards, 1 TD and 1 INT…yikes. Start the GOAT at your own peril.

That’s right folks, loyalty means nothing in these streets. It’s like @DynastyRich says, “what have you done for me lately”. Yesterday’s starts are today’s sits and the Brady/Allen sit makes the second pairing of this article. As I already said, Patriots have one of the best secondaries in the NFL and as much as I love Allen, he has a tendency to turn the ball over. If the Bengals D shut him down last week, I can only imagine what Belichick and the Patriots have in store for a division rival. This is simply a matchup and game I’m looking to avoid for fantasy purposes.