Can Danny Dimes and Darnold make a rebound? Will Rodgers’ struggles continue? Find out in this weeks Changing the Call by @MikeMeUpP! 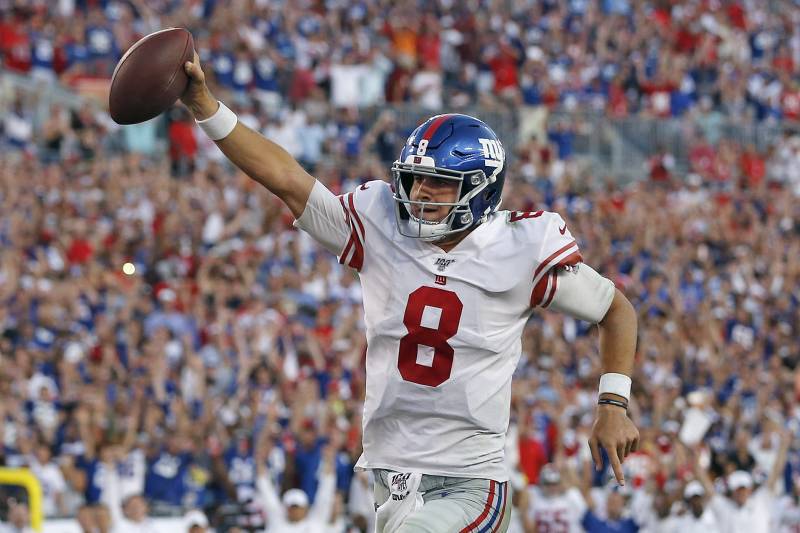 If you’ve been following along so far, we’ve been rolling with the picks, hitting 33 of 47 or a 70%+ hit rate. Hopefully, we can keep this good streak going. Without further to do, let’s get it!

It’s a battle in the city of New York this weekend as the Jets and Giants face off in what is the NFL equivalent of a toilet bowl. Both teams are awful but the Jets are so much worse. Ever since facing the Patriots, Darnold looks like he’s scared to be out on the field and it’s sad to watch. I was higher on Darnold than most this offseason given he has displayed some of the key traits I look for in QBs but how the mighty have fallen. Remember when the Jets actually had playoff aspirations coming into this season? Life comes at you fast. Meanwhile, Daniel Jones hasn’t fared much better as he’s at the top of the league in turnovers. He has the spacial awareness of a goldfish and displayed a complete lack of ability to sense the rush. Hopefully, that gets better with time as he learns to develop an internal clock for getting rid of the ball. However, for fantasy purposes, he’s still viable given his legs. He went back to the ground last week with 9 carries for 54 yards. And he gets a much easier test vs the Jets secondary this week who just got torched by Fitzmagic and Minshew in back to back weeks. The only part of that defense that’s worth a damn is the running D which should funnel the Giants to rely on the air to get things done. On the other side, the Giants secondary has also been abysmal so I do think it’s a potential bounce-back game for Darnold. Per Pat Thorman, this should be one of the higher paced games on the slate which should present multiple scoring opportunities for both sides. I’m taking the over on this game and expecting a top 10 finish for Danny Dimes.

Don’t look now but Ryan Tannehill is a top 10 QB through 2 weeks since taking over for Mariota. This week he gets another juicy matchup at home against the Chiefs who are expecting to get Mahomes back for the first since injuring his knee. Although the Titans may try to establish the run, Mahomes and crew may not let them as the Titans secondary has been getting torched the past couple of weeks by the likes of Winston and Allen. Tannehill will likely need to get it done through the air if they want to keep this game close. It’s always a risk starting Tannehill as he can revert to the back-up level QB he was meant to be at any time but I’m hoping he lasts one more week here before doing so. If he has another week, I’d try and sell high. I just did myself in the 2 leagues I had him cause it’s better to be out a bit early than too late.

Yes, I get it Darnold is doing his best 6th sense impression and trying to get over his fear of Casper but I’m dipping back into the dumpster fire that is the Jets this week. I’m all about going against the grain and as the public shifts away from the Jets, I’m going to stay at the risk of my reputation. The Jets are getting Herndon back this week who should be another quick outlet for Darnold. With him, Anderson, Crowder and Bell, I feel like a high-end QB2 finish may be in the cards against the Giants secondary which has proven again and again that it is bottom of the league. At this point, Janoris Jenkins doesn’t even deserve to be on an NFL field. Crazy how far he’s fallen, once considered one of the best CBs in the league. I’m expecting a redemption week for my boy Robby Anderson as well, potentially breaking a long one against the giants who consistently give up long plays in crucial situations like the one last week to Amari Cooper. I think Darnold should be fine as a QB2 in SF/2QB formats as well as deeper single QB leagues with thin waivers this week if the other guys I mentioned above are already owned.

Remember when I called Matt Ryan as a bust at QB4 vs the Rams? This is much of the same story where I think consensus Ryan way too high. The Saints D has been playing lights out and their DL has been eating OLs alive, led by another stellar campaign by Cam Jordan. The Falcons will be trotting out their bottom 3 OL this week, the same one that got ravaged by the Rams which eventually led to Ryan getting injured. Ryan is coming back off a high ankle sprain and it’s not like he was a mobile QB before the fact. I expect the Falcons to struggle hard. Despite having one of the highest O/U on the slate, all of those points are expected to be scored by the Saints. Many will fall on this and expect Ryan to put up a bunch of points in garbage time but I don’t want to rely too heavily on garbage time for my QB1. I’m putting Ryan on the bench this week and seeing him fully healthy again before confidently putting him back into my lineups. I suggest you all do the same.

If you follow me on Twitter, you’ll know that I have not been the biggest Jared Goff advocate. I got a lot of questions asking why I had him so low on my rankings before the season and he’s showing a lot of the reasons why. He is way too boom/bust to rely on as your primary QB and IMO, is no better than just using a streaming option. Goff folds under pressure like your average Walmart lawn chair and given the Rams have managed their cap space and future assets into oblivion without improving their putrid OL, it’s not going to get much better anytime soon. Meanwhile, the Steelers have completed changed their defense with the addition of young stud Minkah Fitzpatrick. All the people that said he wasn’t worth a top 10 1st round pick are either high or don’t watch the defense. When you get to add a young stud like that to your team, you always do it. People overvalue their own and their teams’ abilities to hit on draft picks. Jet’s were asking for 2 1sts+ for Jamaal Adams. Steelers got a “steal” with that one. Pat Thorman also has this game as one of the slowest paced games with both teams leaning more heavily on the run for different reasons. Rudolph can’t throw deep and Goff can’t throw with all the pressure in his face. Despite coming off a bye, Goff will be on the road in Pittsburgh and I’m expecting Steelers pass rush to eat the rams OL and Goff alive. Cam Heyward is again putting together another pro bowl campaign supported by the younger TJ Watt coming off the edge, this is defense is legit. I picked them up in the leagues I play in that still use a Def/ST to ride them into the home stretch until the Pats get a good matchup again. Steelers D matchup schedule is one of the best and was still only 60% owned which is wild. I view the QB14 as closer to his ceiling than his average outcome. If he hits around this, a lot of things will have gone in his favor. Not the type of risk/reward profile I’m looking for in my starters.

Benching Rodgers was one of my boldest takes of the season so far and it definitely worked out last week. Am I tempting fate by putting him on here again? Perhaps but I have him on here for a reason. I’m not here to simply have hot takes, it’s to help you guys get wins and make the right choice. I think the experts continue to overvalue Rodgers based on name value rather than look at what he’s done so far this season. Although the Packers are at home, this is not a great matchup. The Panthers secondary has been playing very well and their pass rush has been one of the best in the league. They’re way more beatable on the ground so I expect the Packers to rely more heavily on their run game to get this one done. And it’s much of the same story for the Packers, who have one of the worst rushing defenses in the league and will now be going up against what appears to be the best running back in the NFL in CMC. Given these factors, I am not expecting the game flow to favor a heavy passing attack even with Adams back which is going to make his lofty QB4 ranking very hard to return value. I wouldn’t be shocked if Rodgers finishes outside of top 12 this week and I’m personally fine with benching him for the likes of Danny Dimes.